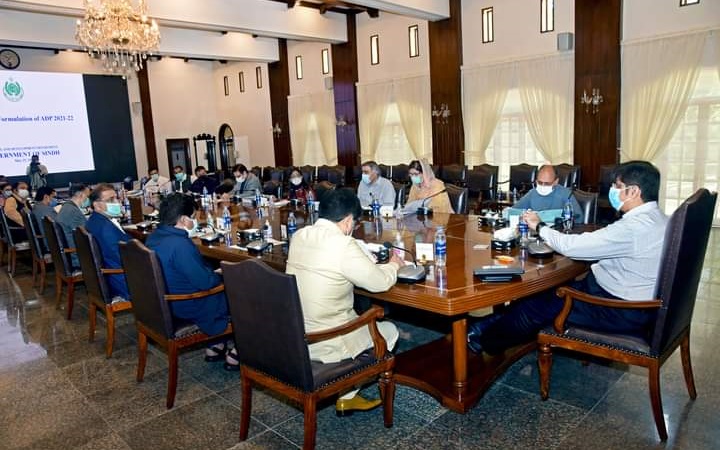 KARACHI: Sindh cabinet on Friday while considering the significance and future financial implications of the pension payments has approved a pension reforms scheme under which around Rs 894.4 billion would be saved, otherwise the pension bill of the government would surpass the salary bill within next 10 years.

The meeting was held under the chairmanship of Sindh Chief Minister Murad Ali Shah at the CM House in Karachi. The provincial ministers, advisers, chief secretary and other officers concerned attended the meeting.

Being in-charge of the Finance Department, the chief minister told the cabinet that in 2012 the number of government employees were 477,570 and their monthly salary and pension bill was Rs 11.78 billion and Rs 6.523 billion respectively.

He said that in 2020 the number of employees increased to 493,182 and the monthly salary bill increased to Rs 23.97 billion while the pension bill rose to Rs 13.329 billion. “If the same post-retirement liabilities, including pension, commuted value of pension, gratuity, family pension and others are continued unabated the pension bill will exceed the salary bill within next 10 years,” he said.

He said that a study has been conducted so that necessary reforms could be introduced to control the ballooning pension bill. Murad Ali Shah said that a restriction on early retirement (minimum 25 years of service and 55 years of age) with reduced pension, according to the number of years in service, was being proposed. The financial impact is determined based on the assumption that the early retirement reduction factor would be 2.5 percent for each year remaining to reach 60 years of age, he said.

He said that the accrued pension liability would be declared by Rs 433.326 billion. Talking about another reform proposal, he said that it would be the use of average pay of the last three years of service as the basis to calculate the amount of pension instead of the last drawn salary. “Setting pensionable salary to average salary of the last three years has a reasonable financial impact on the accrued pension liability of active employees,” he said.

He elaborated that the accrued pension liability would decrease by Rs 348.827 billion. About family pension, the chief minister proposed to limit it to immediate family members. “The family pension may be limited to wife or wives/husband/son (below 21 years)/daughter till marriage,” he said, adding reduction in both the present value (PV) Defined Benefit Obligation (DBO) and the future rate of contribution required to finance future accrual of pension benefits on approximate basis.

He said that the accrued pension liability would decrease by Rs112.179 billion. The cabinet approved the pension reform proposal and appreciated the efforts of the chief minister to introduce reforms. Minister for Health Dr Azra Fazal Pechuho presented a proposal to handover Karachi Institute of Cardiovascular Disease (KICVD) to the Sindh Institute of Cardiovascular Diseases (SICVD) so that it could be made a world class institute like NICVD and its satellites.

Health Secretary Kazim Jatoi said that it used to conduct 9000 Echo tests, 2500 Thallium tests and 1100 ETT tests per year and its OPD has been recorded at 1000 per day. The cabinet was told that the salary component of the KICVD was of Rs646.752 million and non-salary component Rs66.6 million. It showed that the annual budget of KICVD was Rs713.252 million. The cabinet approved handing over of KICVD to SICVD along with its staff.

The chief minister directed the Health Department to allocate budgetary allocations for the next financial year and further modernize the institute. Dr Azra Pechuho told the cabinet that the EPI has requested for provision of 28 cold chain vehicles, including 20 cold chain and eight ultra-freezing vaccine carriers for Rs 348.853 million for supply of COVID-19 vaccines across Sindh.

The cabinet, keeping in view the urgent need of cold chain vehicles, approved the proposal. The provincial cabinet was told that there was a dire need of establishing Sindh Institute of Advanced Endoscopy and Gastroenterology (SIAE&G) at Dr Ruth KM Pfau Civil Hospital Karachi for treatment of poor patients. The health minister said that currently an endoscopy unit was operating at Surgical Ward-4 of the hospital which was not enough.

The cabinet approved the proposal and directed Parliamentary Affairs Minister Mukesh Chawla to get it passed at the earliest. The cabinet allowed the Health Department to sign a memorandum of understanding (MOU) between Benazir Income Support and the Department to prevent stunting in children under two years of age among the most vulnerable beneficiaries.

Minister for Agriculture Ismail Rahu briefing the cabinet said that the Sindh Seed Corporation may be given a one-time grant-in-aid of Rs158.612 million for clearing liabilities of its serving and retired employees. The cabinet observed that the corporation was a self-revenue generating entity. Therefore, it should develop its business plan to make itself a sustainable and efficient organization.

Agriculture Secretary Rahim Soomro told the cabinet that the SSC has 6349 acres of land, of which 4801 acres were cultivable. He said that due to shortage of funds, manpower and irrigation water the SSC was not in a position to utilize its entire land. The chief minister directed the Agriculture Department to prepare a plan to operate SSC on public private partnership mode. The SSC has vast lands and huge resources, but it has failed to utilize them.

The cabinet also formed a committee under Ismail Rahu, Mahboob Zaman and Syed Sardar Shah and secretaries of finance and agriculture to prepare a bailout plan for SSC and conduct an inquiry into the failure of SSC to generate funds and fix responsibility. The cabinet, on the request of the provincial commissioner, has approved amendment in sub rule (3) of Rules-24 of Sindh Local Councils (Elections) Rules, 2015.

The amendment reads as “(3) The ballot paper shall be printed in the format of Form-35 as provided in Rule 59 of the Election Rules, 2017. SRB: Sindh Chief Minister Syed Murad Ali Shah told the cabinet that Sindh Revenue Board, for 11 months (July to May 2020-21), has collected Rs108.686 billion against Rs91.198 billion during the same period of 2019-20 which showed an increase of 19 percent.He said that during the month of May 2021, the SRB collected Rs10.261 billion as compared to Rs6.734 billion collected during May 2020 which showed a growth of 52 percent. The cabinet appreciated the performance of the SRB.