* 'She came out after everyone was chanting Megan for some time,' an eyewitness told E! News 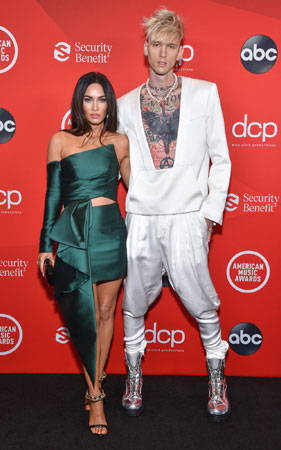 Cheers erupted and sparks flew as Machine Gun Kelly brought a very special guest onstage with him at a show during the Indy 500 weekend: His girlfriend, Megan Fox.

The two appeared together as he performed at Barstool Sports’ party at Grand Park in Westfield, Ind. on Friday, May 28. The 31-year-old rocker briefly puffed on what appeared to be a cigarette and handed it to the 35-year-old actress, who also took a puff, after which he began performing his song “I Think I’m Okay.”

“She came out after everyone was chanting ‘Megan’ for some time,” an eyewitness told E! News. “Then she did stay on the stage in the background for the whole song.”

The lovebirds, who have become one of the most popular new couples over the past year, were later spotted cuddling backstage.

Kelly, whose real name is Colson Baker, and Fox took part in the show almost a week after they walked the red carpet together at the 2021 iHeartRadio Music Awards in Los Angeles, which followed an equally sizzling joint appearance at the 2021 Billboard Music Awards.

The lovebirds, who have become one of the most popular new couples over the past year, were later spotted cuddling backstage

Kelly and Fox met in early 2020 while filming Randall Emmett’s movie Midnight in the Switch Grass.

In April of that year, E! News learned that Fox and husband Brian Austin Green, with whom she shares three sons, were no longer living together. The Beverly Hills, 90210 alum confirmed their separation in a podcast interview a month later.

In late May 2020, Fox starred in Kelly’s music video “Bloody Valentine.” Then on the 25th of that month, she told him, “I love you,” as the rocker would recall on Twitter a year later. They made their public debut as a couple the following June, when they were spotted leaving a bar together in the Los Angeles area.

In November 2020, Fox and Kelly made their red carpet debut as a couple at the 2020 American Music Awards. Days later, the actress filed for divorce from Green after 10 years of marriage.

And speaking of “Bloody Valentines,” this past February, Kelly shared Instagram photos showing him and Fox, as well as a pic of a pendant necklace with a vial that appeared to contain a drop of blood. “I wear your blood around my neck,” he wrote, adding emojis that symbolize a knife, a drop of blood, a DNA symbol and a rose. “My bloody valentine.” This past April, a source close to Fox said the actress and Kelly “plan to get engaged and married” when her divorce from Green is finalized.

“They are very much in love and have a strong and intense relationship,” the source said. “Her divorce is moving along, and they are hashing out custody details.”