Time to think out of the box: Imran 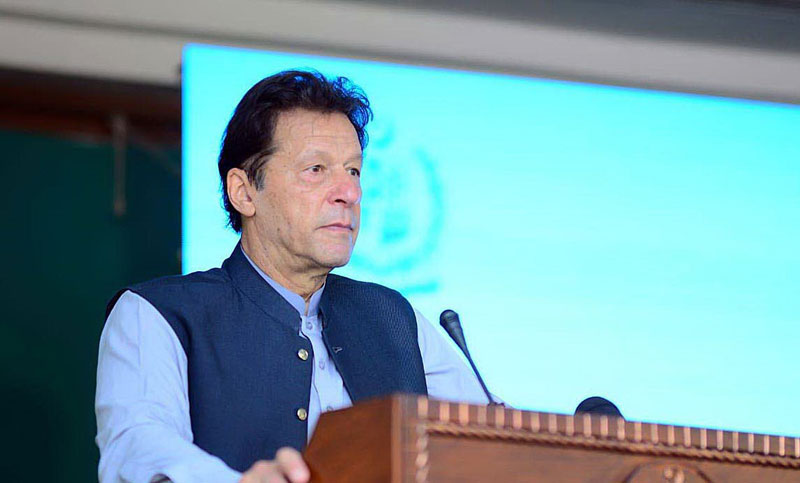 Prime Minister Imran Khan on Monday formally launched the country’s first Green Eurobond (Indus bond) by Water and Power Development Authority (WAPDA) to meet the financial needs relating to construction of Diamer Bhasha and Mohmand dams. The bond has been floated for 10 years to raise $500 million at a competitive price of about 7.5 per cent interest rate.

He said 10 new dams were being built across Pakistan in 10 years, adding that these will help produce environment-friendly electricity. “Pakistan will get 10,000MW of clean energy from these dams,” he said.

Speaking about the Billion Tree Tsunami programme, the premier said his government had planted 5bn trees in Khyber Pakhtunkhwa. “By 2023, we will plant 10bn trees across Pakistan,” added PM Khan, saying that the government was planting trees across cities as well.

He also spoke about the government’s efforts towards a clean environment, saying that Pakistan was working on long-term policies. Imran Khan said Pakistan was working to irrigate barren lands with floodwater and that the country was building 15 new national parks. He touched upon the country’s health sector, adding that in Pakistan, doctors, nurses and the paramedical staff were quite few in number compared to the overall population.

PM Khan praised the government’s initiative to introduce health cards, adding that the country was working to establish a new ‘health system’ due to which people in rural areas will be able to afford healthcare as well. “Private hospitals across the country will increase due to the health system,” he added.

PM Khan said the government was working towards generating wealth in Pakistan, adding that the River Ravi in Lahore and Bundal Island projects in Karachi were reflective of that.

The prime minister said the ‘decade of dams’ project, initiated in 2018 should have been worked up five decades ago to ensure water security. “Ten dams to be built in next 10 years will produce 10,000 megawatt clean electricity. It is a step of thinking about our next generations,” he emphasized. He stressed long-term planning instead of short-term election-to-election approach to carry out development projects in the country. He regretted that Pakistan’s short-term planning in electricity generation resulted in the commodity’s highest per unit rate compared with rest of the countries in South Asia. “Unfortunately, one of Pakistan’s biggest weaknesses is the implementation of projects. In my government I am also seeing that some things lag behind when it comes to implementation.”

Imran Khan lamented the fact that Pakistan’s potential had not been utilised. “When Shaukat Tarin and I were growing up in Pakistan, the country had a different status in the world. Our economy at one point was at the fourth spot in all of Asia. We were progressing rapidly and a major part of that was due to the Planning Commission,” he said. “Long-term planning was being done […] they were thinking about future generations. And this is what builds the foundation of a great nation.

“A nation can’t progress if you carry out planning from one election to the next.” He said that there was a need to invest in the country’s children and think about where the country is headed. “When I used to come back from playing cricket in India, even in the 80s, it used to feel as though I have come back from a poor country to rich one. There was such a contrast between India and Pakistan.” He said that after 1985, India started progressing rapidly, adding that Bangladesh also managed to progress by implementing long-term planning.

Imran Khan said clean energy production supplemented by the 10 billion tree project would help overcome impact of climate change and also the rising levels of pollution in big cities. The establishment of 15 new national parks, recharging of wetlands and growing the dense mangroves are the government’s effective steps to counter global warming, he added. The prime minister touched upon other areas where the government was focusing to bring about a change including uniform academic syllabus, health card scheme, controlling mother and child mortality rate, and reforms for promotion of agriculture and livestock.