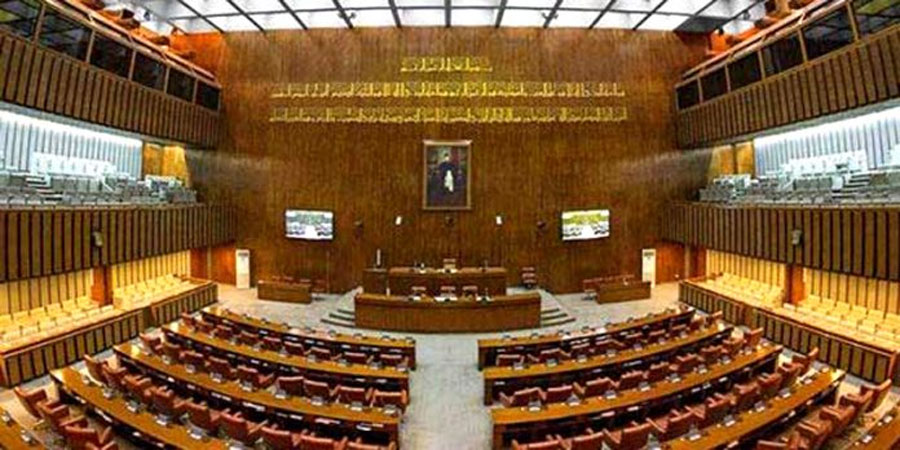 Pakistan’s Senate in a joint resolution on Tuesday urged the world community to take immediate effective and concrete steps to save Palestinians from the fascist Israeli war machine.

The joint resolution, which was passed unanimously in the upper house of the parliament condemned the unprovoked aggression unleashed by Israel against defenseless Palestinians in occupied territories.

The resolution highlighted the hypocrisy and double standards of various countries whose condemnation is missing, but still talk of human rights, despite being complicit with the aggressor.

The house noted that the atrocities committed by Israel against the Palestine included war crimes, bombing non-military targets like residential complexes and media offices, as well as deliberately committing sacrilege of Muslim holy places.

The resolution read that “We reject any attempt to equate the aggressor with the victims of aggression (Palestinian people) and are very clear, this is not a conflict. This is a one-sided war.”

The senate also welcomed the Government of Pakistan’s initiatives to dispatch humanitarian assistance to the beseiged people of Gaza and to diplomatically coordinate with other countries on Palestinian issue.

The house urged to take steps including lifting the blockade in Gaza, sending shipments of humanitarian supplies to the people of Gaza, cessation of Israeli aggression, sending independent observer teams to Gaza, contributing to the reconstruction and rebuilding of Gaza and initiating war crimes trials against Israeli occupation army for their crimes in Gaza and Jerusalem.

The resolution said that the Palestine is facing nothing less than genocide, massacre and ethnic cleansing. Israel is an apartheid state and guilty of war crimes and settler colonialism. It added only a two-state solution is acceptable with total withdrawal of Israel from all occupied Arab territories including Jerusalem and the establishment of an independent homeland for Palestinians with Al- Quds Al-Sharif as its capital.

The house also deplored the obfuscation of facts and politicization of the situation by a few quarters, creating false equivalence between the Palestinian victims and Israeli aggressors, to justify Israel’s attacks against Palestinian civilians.

The resolution reafformed Pakistan’s unwavering support for the realization of the right to self- determination and other fundamental rights of the Palestinian people as well as for the two- state solution based on the pre-1967 borders and a free, secure, viable, independent and contiguous State of Palestine, with Al-Quds Al Sharif as its capital. Organizaton of Islamic Countries (OIC) and Arab League is also urged to intensify their efforts to help the Palestinian people, taking note of the resolution adopted by the emergency meeting of the OIC Executive Committee at the Foreign Ministers level on May 16, 2021 which embodies the collective condemnation of Israeli brutalities.

The Senate called upon the international community to ensure Israel’s compliance with resolutions of the UN Security Council, UN General Assembly and the UN Human Rights Council, reaffirming the right to self- determination of the Palestinian people.

Protection of Civilian Persons in Time of War and its Additional Protocol-1.

The house condemned Israel for violating the sanctity of Al Aqsa Mosque and Haram Al Sharif, and demanded unfettered access for repairing the damage caused to religious holy sites by Israeli reprehensible actions.

Proposing a solution to the palestinian issue, the senate urged the globel powers to establish international independent protection mechanism for the protection of Palestinian people as also demanded by the Organization of Islamic Cooperation.

The House sought the right of return of Palestinians to their displaced homes, “Pakistan stands shoulder to shoulder with the struggle of the Palestinian people and we salute the velour, heroism and sacrifices of Palestinian people including children, resisting repression with grit,determination and an indomitable spirit, ” the resolution said.

The Senate urged all parliaments and parliamentarians in the world to take note of these war crimes which are being committed by Israel in Occupied Palestine and by India in Indian Occupied Jammu and to understand that there is an inextricable linkage of peace, security in our region and the world with the just and peaceful resolution of these lingering conflicts in Occupied Palestine and Indian Occupied Jammu Kashmir. During the session, Minister for Foreign Affairs Shah Mahmood Qureshi, while winding up the debate, also stressed the need for continuous efforts to awaken the world conscience, both on humanitarian and ideological grounds, for resolving the Palestine issue on a permanent basis.

Meanehile, Chairman Senate Muhammad Sadiq Sanjrani directed the Senate Secretariat to send the copy of the resolution to world’s parliaments, media and humanitarian organizations. During the session, he said the resolution would also be translated into different languages including French, Arabic and Spanish.