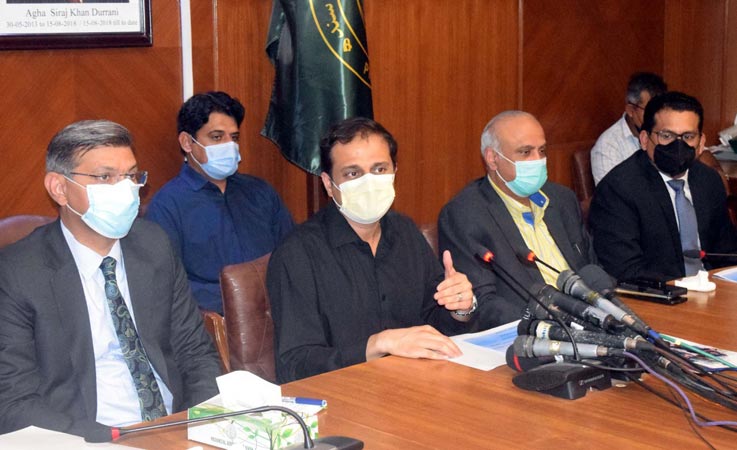 Spokesperson of Sindh Government and Advisor for Law, Environment & Coastal Development Barrister Murtaza Wahab has said that we as a nation are not taking any precaution in the matter of spread of corona virus. As decided by the NCOC, we have also decided that the task force will meet again on Thursday and if there is no improvement, we will take tough decisions.

He expressed these views while addressing a press conference in the committee room of Sindh Assembly Building here today. “If traders and the public want things to get better, we have to wear masks, follow the SOP and get vaccinated, otherwise we have to make tough decisions,” he said. He appealed to the people not to push for difficult decisions. In India, when the monster of the corona virus got out of control, there was a lack of oxygen. Therefore

The Sindh government immediately decided to ensure oxygen supply and the Sindh chief Minister asked the administration to make alternative arrangements. Jamshoro District has been active in this regard and Deputy Commissioner Jamshoro has contacted the power plants. He further said that after the test on 14th May, PCSIR has declared this oxygen suitable for medical purposes and Pakistan will be the first country in the subcontinent to produce oxygen using this process. We can also produce oxygen under this process and we can also produce this gas at Guddu from which South Punjab and Balochistan can be benefited.

He said that FIR has been lodged in Kashmore incident and raids are being carried out to arrest the accused. The accused in this incident have evacuated their houses from Kashmore district but police are conducting regular raids and soon the perpetrators of the incident will be arrested. “We disagreed with the decisions of the NCOC meeting because the decision to lift the sanctions was taken in a hurry,” he said.

We want to fight Karuna, not PTI. We took a stand. He said that the spokesperson of IRSA was saying that we have increased the supply but after the statement of Chairman Bilawal Bhutto Zardari the water supply increased. When the Sindh government fought the Sindh case, the supply increased. “We are grateful to China. Banning the first dose for the second dose of the cyanofarm vaccine. People should not go on social media messages” he concluded.