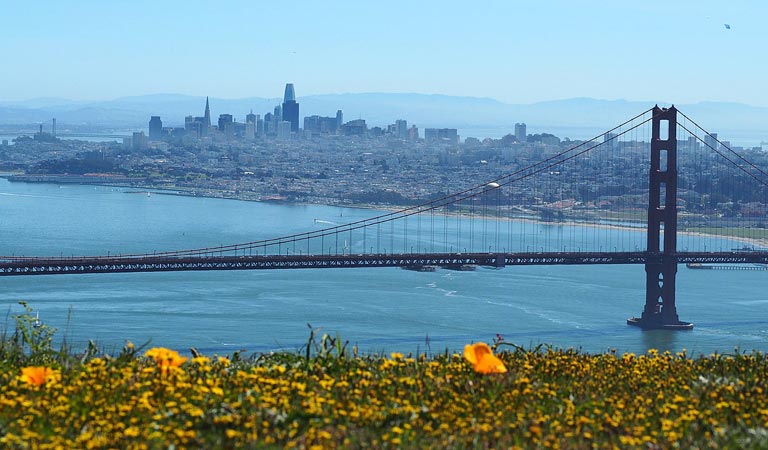 Crossing the Golden Gate Bridge at the start of a road trip has to be one of travel’s most inspiring moments. Down below, San Francisco Bay glitters, while ahead the giant suspension towers rise.

The sense of escape and adventure is palpable as you cruise along at 45mph (the speed limit) across one of America’s icons.

What a way to start a thousand-mile drive from the centre of the dot-com world, up Highways 1 and 101 to Seattle in Washington State.

The secret is to pace yourself and learn to love life on the freeway, with empty roads twisting ahead and some of America’s finest scenery to marvel at. There Is No Need to Rush.

This became the mantra for me and my girlfriend almost from the start, and we stopped on the coast for a picnic just a dozen miles north of the Golden Gate Bridge, where cliffs plunged hundreds of feet and the ocean spread out ahead.

Gulls soared. Turkey vultures drifted in the thermals. Waves crashed on boulders far below. You already felt a long way from anywhere.

So began a journey that quickly transported us into smalltown America. Tiny places on Highway 1 with picket fences, clapboard houses, oyster shacks and old-style saloons came and went as the road hugged the coast.

There, we dropped off our bags, drank ice-cold beers at a no-nonsense bar and tucked into spicy fish tacos. Locals in baseball caps nattered at the bar. A ballgame flickered on TV. Not much else was going on. Smalltown America was doing what smalltown America does best: being down-to-earth.

Then, in the morning we hit the highway to Trinidad, snaking into California’s fabled redwood parks.

Driving between the giant sequoias felt like travelling back to prehistoric times. Everything seemed so big. And you seem so small, especially if you visit the Chandelier Tree in Drive-Thru Tree Park.

This 276ft-tall redwood has a hole cut in the base and for $10 you drive through the middle. We did so before heading on through the Avenue of the Giants – yet more sequoias – to Trinidad.

This really was very smalltown America, with a pizzeria, a diner, a grocery shop and not much else.

We lit a fire in our cabin, cooked a meal, drank Buds. After a long journey – 300 miles north of San Francisco already – it was good to unwind.

The next day, Oregon awaited. It is down-at-heel in this part of northern California before the Oregon border: pawn shops, sprawling recreational vehicle camps, discount liquor stores and legalised marijuana shops.

Across the state line, logging towns emerged, with strips of fast-food joints and motels, beyond which we crossed a fine Art Deco bridge above the Siuslaw river and found ourselves in Florence.

No Uffizi or Michelangelo’s David in this Florence, which is a tiny lumber and fishing ‘city’, but there was a pleasant motel, as well as inviting steak and seafood restaurants by the river’s edge.

It was a perfect spot to plan the next day’s route and some sightseeing, which included Florence’s amazing sand dunes – ‘Oregon’s Sahara’ – and the equally extraordinary Sea Lion Caves, home to hundreds of the noisy creatures.

From Florence, the road leads onwards and upwards past a ‘Gun Shop: We Buy Guns’, along a creek covered in yellow lilies, and then inland between vineyards, as snow-capped Mount Jefferson rises majestically ahead.

Here, you join Interstate 5 amid a flow of trucks. Here also, you may decide to stop at a Nike discount outlet at Woodburn. Then we arrived in Portland, one of America’s hippest cities. Our hotel was in a neighbourhood buzzing with craft breweries. Buskers sang Jimi Hendrix songs. Markets offered delicious Korean and Japanese dishes. Glasses clinked in bars.

Indulgence seemed to be the way to go, so we indulged ourselves. We were sad to leave, but it was cloudy and rainy on our final day: the drive to Seattle.

Interstate 5 was busy yet again as we splashed our way along in the Chevrolet, with Mount St Helens somewhere to the right. And then the skyscrapers arose. We turned off a flyover and checked in at a downtown hotel.

Another Big Smoke awaited: boat trips on Elliott Bay; lunch at the vibrant Pike Place seafood market; a visit to the excellent Museum of Pop Culture; a ride to the top of the 605ft Space Needle.

A week’s drive in the US can take you to a lot of wonderful places.

All that remained was the short journey to the airport. A thousand miles almost exactly, said the milometer… and as many memories, too.