Shehbaz tried to flee Pakistan in the dead of night: Farrukh Habib

Farmers getting right rates of crops for the first time 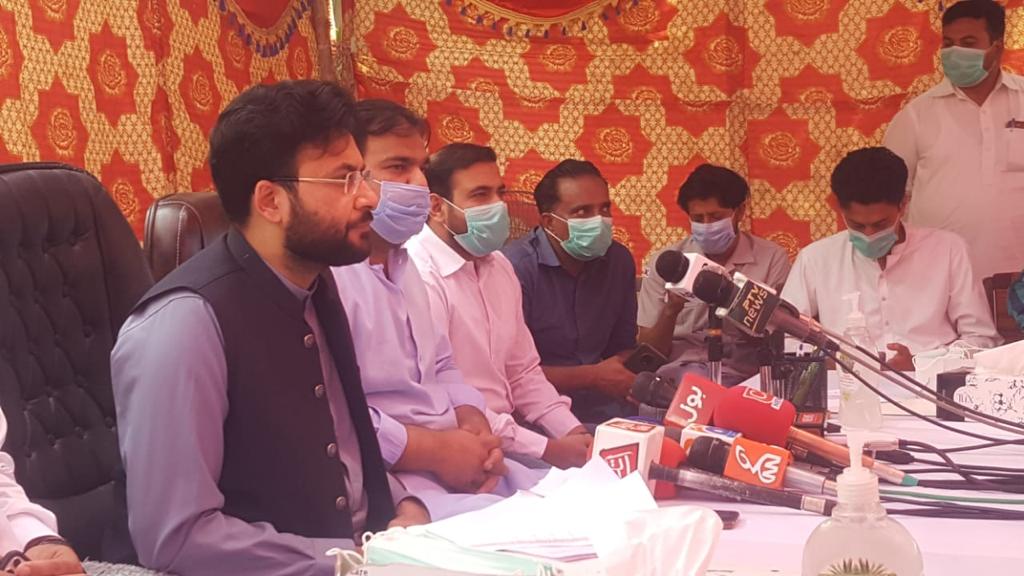 FAISALABAD: Minister of State for Information and Broadcasting Mian Farrukh Habib has said that Shehbaz Sharif tried to flee the country in the dark of night. When they are in power, they do not leave the country, they run away later. These are thieves, they will be held accountable. Prime Minister Imran Khan will not give NRO to anyone. If Imran Khan backs down, they will start celebrating.

Talking to the media on Market Committee Dijkot Road, he said that Imran Khan’s visit to Saudi Arabia would strengthen the ties between the two countries. Imran Khan has taken up Islamophobia at the state level. The sentiments of 1.5 billion Muslims have been hurt. Such freedom of expression cannot be allowed. Imran Khan’s efforts to unite the Muslim Ummah are welcome. The West needs to be persuaded that we do not accept any freedom of expression that offends 1.5 billion Muslims. We need to follow the system of the state of Madinah, which will improve our system.

The state minister said that in our government the farmer has got more than Rs 1,100 billion, today the farmers across the country are getting the right rate of potato, maize, and sugarcane. We are reducing the role of the middlemen in what comes to the market from the farmer. Earlier, a farmer could get a tractor by mortgaging the land. Now, a farmer can get a tractor on a single-digit interest. Our agricultural sector has not been the focus of attention due to previous governments. The present government is subsidizing farmers in wheat worth Rs 500 billion and has also issued farmer cards Now agricultural tools are going to be part of the successful youth program.

Mian Farrukh Habib said that the unreasonable noise of inflation is from the opposition and now the prices of things are coming down. Onions are being sold at Rs 25 per kg. Sugar is being sold at Rs 65 per kg in the Ramadan bazaar. There is a rush in some places but the supply is getting equal. Everyone is getting relief. Bilawal should tell how many times the Chief Minister of Sindh visited the markets, give relief to the people of Sindh, he should pay attention to alleviate the poverty of the people. After the 18th amendment, it is also the responsibility of the provincial governments to control the rate.

“Coronavirus is a deadly epidemic, so take care of SOPs and wear a mask,” he added. The Prime Minister of Pakistan has laid the foundation stone of the Nia Ghar Housing Scheme across the country. Faisal’s journalists will soon be allotted a journalist colony, for which the FDA has allocated space. We will include journalists in health cards and colonies. The High Court bench should be in Faisalabad. I support that.

Before this, Mr Habib and Deputy Commissioner Muhammad Ali visited the grain market and checked the implementation of Corona SOPs at shops including prices of pulses and other commodities. Assistant Commissioners Umar Maqbool, Syed Ayub Bukhari, Chairman Market Committee Chaudhry Abrar Rasheed Dhihlon, and others were also present. The Minister of State and Deputy Commissioner, while reviewing the quality of pulses and sale at fixed prices in the shops in the grain market, asked the shopkeepers to sell only standard items to the consumers. He also stressed maintaining a supply chain in the situation of corona waves. They apprehended the people without face masks in the grain market and handed them over to the police. The Minister of State asked the shopkeepers to ensure the use of face masks and not to leave the houses without masks. The cases against the accused are being registered, so prove your responsibility to avoid punishment and ensure the use of face masks. The Deputy Commissioner directed the Assistant Commissioners to ensure implementation of Corona SOPs at other places including the grain market. He said that citizens should protect themselves and others from Corona. precaution is better than suffering from an epidemic like Corona, he added.