Writer invites historians and scholars to declare him successful or unsuccessful 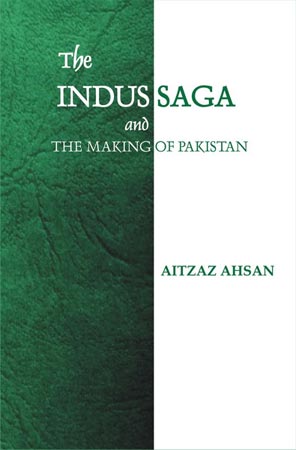 Since the inception of Pakistan, various scholars have posed various theories on its independence. Some have seen and analysed it through biased lenses while others seem unable to write whatever they want. In the circumstances, renowned barrister and former senator, Aitzaz Ahsan has purported quite different aspect of the history of subcontinent. In his provocative and highly readable book; The Indus Saga and the Making of Pakistan. In a book, “identity crisis” is one of the foremost points he supposed to ponder in the text. He pays reader’s attention on the foundations and roots of Indus people. As for as religion is concerned, in opening pages he negates the concept that the people of Indus are neither Persian nor Arabs rather racially, ethnically, linguistically and above all culturally they are more closely linked to the peoples of Central Asia and Iran.

The book is divided into three segments; first part titled The Two Regions. It begins in a Socratic way; throw the questions and do answer of them. One can say it is written in an argumentative form. Here, he presents thesis in order to prove Indus as an outpost region that has always been resisted. For this strong statement he provides logical sequence of historical backgrounds, he claims;

“During the last six thousand years Indus, has indeed, remained independent of and separate from India for almost five and a half thousand years. Only the three ‘Universal States’, those of the Mauryans, the Mughals and the British, welded these two regions together in single empires. And the aggregate period of these ‘Universal States’ was not more than five hundred years… For the remainder, from prehistory to the nineteenth century, Indus has been Pakistan. 1947 was only a reassertion of that reality.”

Furthermore, he seconds the opinion of KK Aziz who proves that the distorted narrative of history is being inculcated in the minds of students by state. Additionally, from ancient concepts to Maurya epoch delineated with admirable brevity and clarity.

Second part, The Two Worlds, investigates the differences between the Indus person and the most recent foreign rulers, the British. A number of reasons are figured out in this segment that becomes the solid reasons of Mughal Empire’s decline. For instance, printing press changed the entire dynamics of Europe and Mughals did not follow such progressive imprints. Secondly, people used to memorise the Holy Quran without any essential understanding of its meaning. Thirdly, there was no teaching of the applied sciences, except in a very bookish and unquestioning manner. Fourthly, there were no laboratories or observatories. And above all, no female received any education except on a private one-to-one basis. In a way, the joint work of Daron Acemoglu and James A. Robinson, Why Nations Fail, is worth to be cited here who proclaim that countries fall apart when their elites block the ways for new technologies. It gives them a big incentive to try to stop the march of progress. Good for them, but not for society. Similarly, Mughal Dynasty did the same who considered themselves as the shadows of God on earth. Additionally, Aitzaz Ahsan refers the most celebrated work of VD Mahajan, India Since 1526, by showing the darkest image of education system in subcontinent.

“The educational system of both the Hindus and the Muslims was unprogressive and hence both of them were equally backward educationally. Neither of them had any idea of the progress sciences had made in the West. They also knew nothing about the new methods of observation, experiment and criticism.”

So, the situations are not much satisfactory, still the attitude of Indus (Pakistani) people is irrational and unreasonable; the position is getting worse every day. They have not acquired a scientific approach toward life. We come to conclusions without analysis or basis in fact.

The last segment, Two Nations, explores the essential divide between the Muslims and the Hindus of the subcontinent comprising Indus and India. In author’s perspective 1937 elections were the turning point that would inevitably lead to the so far elusive ‘parting of the ways’ of the two communities. One can oppose this statement by providing strong arguments from various sources. For instance, Zahid Chaudhary’s meritorious work aptly throws light on the separation of Muslims of India in fairly a different way. For him, a number of reasons play vital role in partition. USSR, imperialistic psyche, do apart them and do govern on them; such factors paved ways for the unending sufferings of both nations. He admits that the ideology of Jinnah died with him who dreamed for a prosperous and a secular state. Moreover, the author has portrayed both sides of Indus person. Secular psyche of Indus people has perfectly sketched;

In short, enlightened Aitzaz Ahsan seems rational in his conclusions; he does not consider his work as last verses. In simple words, he invites historians and scholars to prove his work either successful or unsuccessful. This kind of attitude is direly needed in our today’s rational-world where ‘research’ word is being exploited and misunderstood by our so-called intellectuals.

The writer is a blogger and can be reached at mangriogul@gmail.com