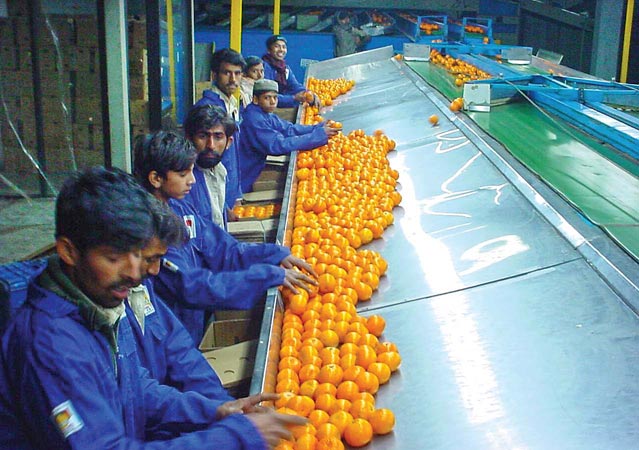 Pakistan is one of the top citrus producers in the world. Citrus contributes about 30% to the country’s total fruit output. Last year, Pakistan earned its highest export revenue from kinnow of $222 million amounting to 370,000 tonnes, according to a report on Pakistani citrus industry released by the China-Pakistan Agricultural and Industrial Cooperation Information Platform (CPAIC).

The report also points out that most of the citrus fruits produced by Pakistan are consumed in foreign markets. Among the exported varieties, kinnow is the most important one. However, as old varieties are wearing out, kinnow quality is worsening.

For years, there has been no major breakthrough in kinnow varieties. Among the export kinnow, only 2.6% goes to developed countries, mostly because consumers in these markets favor seedless citrus. Such a trend is gradually expanding to other parts of the world. Currently, seedless varieties represent 61% of total citrus export worldwide, which leads to a sharp decline in the price of Pakistani kinnow by more than 50% from 2016 to 2020.

There is a research institute in Sargodha dedicated to the development of new citrus varieties, but it has not published any substantive results in the past five years. The situation is similar for the National Agricultural Research Centre (NARC), Islamabad. If these research institutes can be stimulated to produce new seedless kinnow varieties, they could have brought huge wealth for Pakistan.

In addition, even with new varieties, citrus growers in Pakistan are not qualified to grow the new varieties-they have neither the professional knowledge nor the suitable equipment. Also, they are not willing to engage in export themselves for lack of financing channels, infrastructure (transportation, grading, cold storage and warehousing facilities), technical guidance, international market information, and time to wait for the issuance of various permits.

Therefore, the CPAIC report recommends growers be trained and informed of such basic knowledge as sowing time, planting methods, fertilizer ratio, harvesting methods, etc. The government should also provide credit to them so that they have the finances to purchase equipment necessary for the variety shift, such as automatic irrigation systems and sprinklers. Formal packaging, grading and transportation systems are also required by dedicated exporters.

The cheapest packaging materials used by exporters not only causes catastrophic losses to the fruit in transit, but also brings about a tarnished reputation in the international market. None of the international airports in Pakistan are equipped with storage facilities for fresh agricultural products; only one port has such facilities but its capacity is seriously insufficient.

Fortunately, the education level of citrus growers in Pakistan is gradually improving. With appropriate training and information access channels, growers may improve the quality of fruit through crop management and other methods, and provide value addition through processing; this will help develop and expand the citrus industry in Pakistan.

Pakistani citrus is expected to be exported to European countries, China and Central Asian markets with higher value addition beyond the existing markets in the Middle East, Africa and Southeast Asia.

Chairman Senate Sadiq Sanjrani met with a delegation of Federation of Pakistan Chambers of Commerce and Industry (FPCCI) and discussed a variety of issues concerning to economic growth of Pakistan.

The delegation led by President FPCCI, Mian Nasser Hyatt Maggo comprised of office bearers and senior representatives of business, industry, and trade community of Pakistan also attended the Iftar-cum-Dinner hosted by the chairman Senate at his residence, said a press release issued here on Monday.

Sadiq Sanjrani and FPCCI’s delegation discussed the issues concerning the business environment of the country and economic growth of Pakistan at length.

The delegation briefed the Chairman Senate on their concerns and inputs on macroeconomic, industrial, financial, energy, taxation/tariffs, ease of doing business, and trade policies of Pakistan. Chairman Senate assured the delegation of his full support and promised to take up the issues at the highest forums.