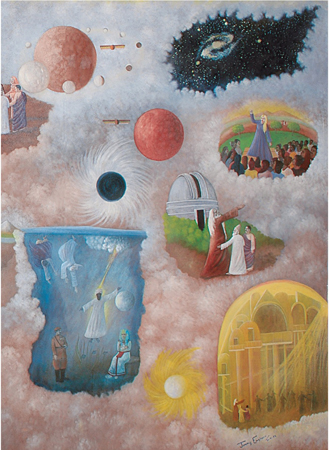 World-renowned Pakistani artist, social crusader and peace activist Jimmy Engineer has said that he is genuinely proud having transformed in colours in a big mural great poet and philosopher Allama Mohammad Iqbal’s collection of Persian poetry “Javid Namah” and regards it as his major artistic achievement.

He said this while talking to this scribe in connection with 83rd death anniversary of great poet and thinker which was observed by the grateful people on April 21, 2021.

Jimmy Engineer said that he has been painting for well over four decades and has so far created hundreds of paintings but he considers transforming big mural into colours.

Allama Iqbal’s Persian poetic collection “Javid Namah” is one of his two major artistic achievements, other being his historical series of Pakistan Movement paintings highlighting Muslims exodus to their new motherland carved out on the world map out of nowhere under inspiring leadership of Quaid-i-Azam Mohammad Ali Jinnah on the basis of concept of a separate homeland for the Muslims of the sub-continent presented by Allama Mohammad Iqbal.

He said that both these major artistic achievements were created with the blessings of Almighty Allah during first decade of his turning into a professional artist and have given him recognition and appreciation, both nationally and internationally, as an imaginative creative artist. Incidentally both these major artistic achievements were created by him while he was still staying in Lahore. He is presently living in Karachi for many years together and busy working there as dedicated and committed creative artist, social worker and peace activist.

Allama Iqbal’s Persian poetic collection ‘Javid Namah’ is one of his two major artistic achievements, other being his historical series of Pakistan Movement paintings, highlighting Muslims exodus to their new motherland carved out on the world map out of nowhere under inspiring leadership of Quaid-i-Azam Mohammad Ali Jinnah on the basis of concept of a separate homeland for the Muslims of the sub-continent presented by Allama Mohammad Iqbal

Giving more details regarding mural of “Javid Namah”, Jimmy Engineer said that Allama Mohammad Iqbal in one of his letters to his son Javid Iqbal had written that in the first instance, no artist will ever be able to transform “Javid Namah” in colours on the canvass or as a mural and if anyone at all accomplished this then that artist will be attain international fame and reputation. He said that a number of local and foreign artists had tried their hands during life time of great poet and philosopher and even after his demise in April 1938 but had failed to accomplish this challenging task. He emphatically stated that he had undertaken this gigantic task as a challenge to him as a creative and imaginative artist and was able to complete it in one year with the blessings of Almighty Allah.

Jimmy Engineer further said that that he had started working to transform “Javid Namah” into a mural of 10 x 15 feet size on the wall of a room of Dr Javid Iqbal’s newly acquired bungalow on Main Boulevard Gulberg Lahore in 1981 and had completed it one year in 1982 staying throughout this period there.

He said that research scholars on Iqbaliyaat can visit the bungalow of Dr Javid Iqbal, who has since expired couple of years back, with the prior permission of his wife Justice Nasira Javid Iqbal to view the mural of “Javid Namah” which will be greatly helpful in their researches.

In respond to a question about publication of images of “Javid Namah” mural in a book published in October 2012, Jimmy Engineer said that well-known India writer and intellectual Mumtaz Currim had edited and compiled number of articles written by scholars from India and abroad and published these in a book under the title of “Jannat: Paradise in Islamic Art” which was published by Marg Foundation.

One of the article in the book was titled “Javid Namah: Iqbal’s Heavenly Journey” which was written by Syed Khalid Qadri. The said article included images of the big mural of “Javid Namah” created by me, he added.

Jimmy Engineer went on to say that he regarded this as a great honour for himself as well as his loved motherland Pakistan that the images of mural of “Javid Namah” had been published in a book in this manner.

Replying to a question, Jimmy Engineer said that he will be talking about his other major artistic achievement Pakistan Movement paintings some other times as creation of these huge canvasses into colour also make interesting and appreciable reading for people of all ages particularly the younger generations.

The writer can be reached at zahidriffat@gmail.com