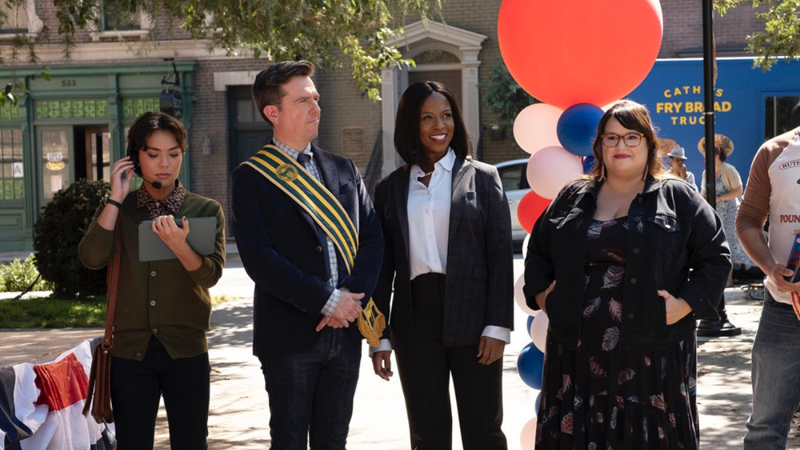 In the new Peacock sitcom Rutherford Falls, Ed Helms and Jana Schmieding play best friends Nathan and Reagan, who grew up together in the titular northeast town named for his ancestor who famously brokered peace with her ancestors in the Minishonka Nation.

The pair are inseparable, but they’ve lived very different lives: privilege for him, struggle for her. In one episode, a drunk friend of Nathan’s trashes a local historical site, and while taking the guy home, he asks Reagan to leave a note for the state parks official to call him in the morning about the mess they’ve made. “Vandalise public property and leave a note?” she mutters to herself. “Oh, to lead that white dude life!”

Nathan and Reagan’s contrasting experiences are meant to be the comic engine that drives Rutherford Falls, as well as a symbol for all the ways the town’s white and indigenous populations do and don’t get along. But even though Helms co-created it – along with comedy mogul Michael Schur and Superstore alum Sierra Teller Ornelas – the show is balanced heavily in favour of Reagan, in both sympathy and comedy.

Nathan is introduced first, hosting a group of schoolchildren at the museum he has built to celebrate the history of both his town and his influential family. He’s enthusiastic in telling the tale of how, 400 years ago, Lawrence Rutherford, a.k.a. “Big Larry,” signed a treaty with the Minishonka that is honoured to this day. But early on, he seems calmer, more empathetic, and more self-aware than Helms was as Andy Bernard on The Office. In particular, Nathan’s unwavering friendship with Reagan humanizes him in ways The Office never managed to do, not even after that show unwisely decided to make Andy the new boss following Steve Carell’s departure. There’s even a scene in a later episode where he insists on performing an original song at a family reunion – his older brother Duz describes it as a musical newsletter – and mostly charms his relatives with it, rather than annoying them in the way Andy would have with his own performing ambitions. 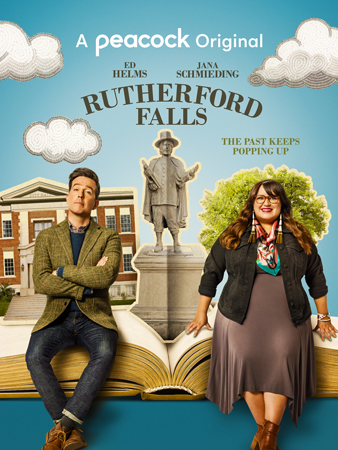 Within short order, though, Nathan is wildly overreacting to the town’s plan to relocate a Big Larry statue that’s become a traffic hazard. This triggers a series of unexpected events involving both the mega-corporation founded by the Rutherford family and ambitious Minishonka casino boss Terry Thomas, so it’s necessary for the plot of what’s a relatively serialized sitcom. But as Nathan makes the situation worse and worse, that plot mainly feels like an excuse to indulge some of the more annoying aspects of Helms’ screen persona.

Rutherford Falls finds more comic specificity when it focuses on Reagan, Terry, or life in general in the Minishonka community. Where Nathan was born into every advantage America has to offer, many of the show’s other characters have had to work much harder to carve out a place for themselves, with mixed success. Some of the show’s richest humour comes from scenes pairing smooth operator Terry with Reagan, who tends to leave the other Minishonka with the impression that she thinks she’s better than them.

Not coincidentally, by far the strongest episode of the four sent to critics is the fourth one, named after and focusing on Terry. Over the course of a half-hour, he tries to juggle his various schemes with attending his son’s lacrosse games, encouraging his teenage daughter to turn her hobby into a business, and fending off the inquiries of NPR reporter Josh, who senses a quintessentially American story in the resurfaced conflict between the town’s two communities. Like most of the show, it’s more genial and wryly amusing than laugh-out-loud funny. But that episode, and other scenes involving the Minishonka, feel more sure of themselves than whenever Nathan’s naive, stubborn bravado keeps getting him, his family, and even the Rutherford corporation into trouble.

Sierra Teller Ornelas is Navajo and Mexican-American, and the parts of Rutherford Falls that click most strongly are a testament to the value of storytellers innately understanding the subjects of their stories. Given how skimpy indigenous representation has been on television throughout its history, it may be that a show like this couldn’t get made without a recognizable white star who’s at the centre of all the action. And Reagan is treated as Nathan’s narrative equal, even though Jana Schmieding isn’t nearly as famous as Ed Helms. Like many of the series Schur has produced – including Parks and Recreation, which treated Pawnee’s history of racial atrocities against its Native population as a dark running gag – Rutherford Falls feels like it’s still figuring itself out in these early episodes provided to critics. But until it gets there, Reagan’s best friend may try your patience as much as he does hers.