San Antonio Zoo in Texas has started work on a $1.4million new jaguar enclosure that features a reinforced see-through walkway, allowing park-goers unimpeded views of the big cats from below.

The zoo described the unique ‘catwalk’ as a ‘world first’, with an opening date set for this fall.

Overland Partners, the architecture firm that designed the catwalk, says: ‘Without a solid barrier, visitors get the thrill of proximity, as if the jaguars were almost on the loose.’

The designers add: ‘The bridge is designed to mimic a pathway through the tree canopy, but with unprecedented visibility for visitors.’

Two renderings have been released showing what the cutting-edge habitat will look like, with one depicting visitors looking up as jaguars roam above on the walkway – called the Jaguar Skywalk on the zoo’s signage – and another a huge jaguar face on one of the pathways created from tiles.

Commenting on the new enclosure, the zoo’s president and CEO Tim Morrow said on Monday: ‘We are incredibly excited to bring this one-of-a-kind habitat to San Antonio. In the wild, jaguars are natural climbers as they explore tree canopies and are skilled hunters on river edges.

‘This new habitat provides jaguars opportunities to be overhead in the treetops as well as near the river inside the Amazonian Aviary.’

The catwalk – made from a fibreglass product moulded to resemble the texture of bark – will connect the existing jaguar habitat to another habitat, expanding it significantly. 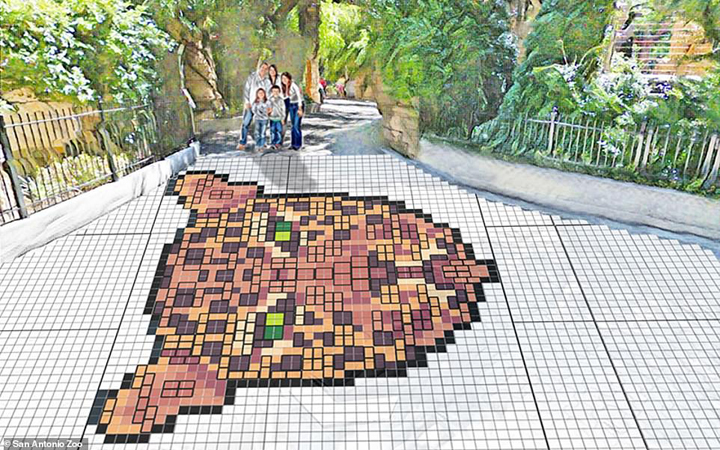 Jaguars are mainly confined to the rainforests of the Amazon basin, and in the nearby Pantanal wetlands, and they often live near lakes and rivers.

In a bid to mimic this environment the new enclosure will include ‘multiple waterfalls, and increased vegetation’.

Fundraising for the enclosure started in 2016, but the zoo was forced to shift focus to other projects, including introducing southern white rhinos to an expanded savanna habitat in March 2019.

The building work was further delayed by rising construction costs and financial pressures caused by the pandemic, but the much-anticipated project is now underway.

There are approximately 15,000 jaguars in the wild, and they have a ‘near threatened’ conservation status on the International Union for the Conservation of Nature Red List of Threatened Species.

Several reasons have contributed to the species’ decline, including poaching and habitat loss.