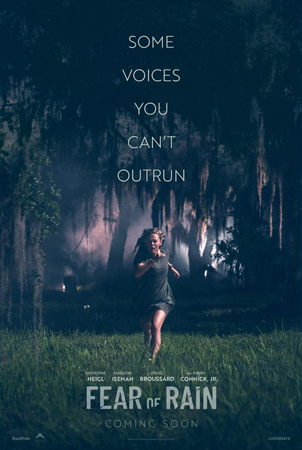 Here’s a horror flick that wants to have its cake and eat it: combining a well-intentioned drama about teenage mental illness with a lurid potboiler. Director Castille Landon seems to be wagging her finger at films containing damaging stereotypes of mental health, while telling her own sensational and lurid story. In Florida, a high-schooler with schizophrenia becomes convinced that the woman next door is keeping a little girl locked up in her attic. Is she hallucinating, or is her neighbour a kidnapper? It opens with a nastily effective slasher movie scene: a hooded man stalks a blond teenager through a cemetery, then buries her alive in a shallow grave. The girl wakes up thrashing in a hospital bed. This is Rain, who’s had a terrifying psychotic episode after stopping her meds. Her concerned parents are played by Katherine Heigl and Harry Connick Jr; they seem to have walked in from a syrupy Nicholas Sparks adaptation, bemused and blank-faced. Back in her bedroom, Rain picks a piece of her own fingernail out of the wall, in case anyone is in any doubt how serious her illness is.