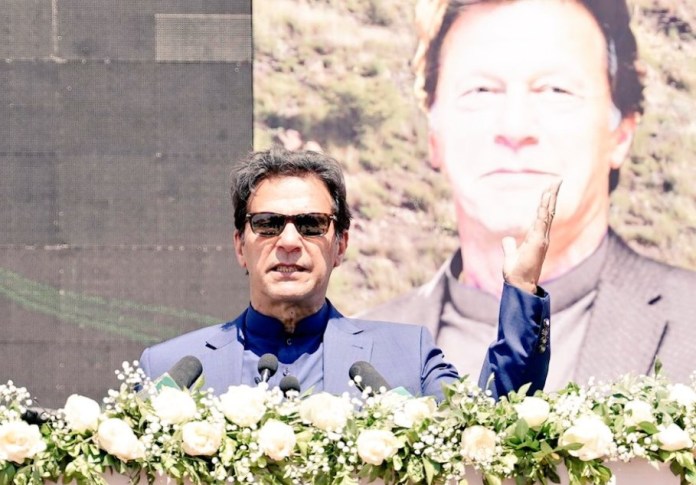 Prime Minister Imran Khan Monday said his government and the recently outlawed Tehreek-i-Labbaik Pakistan (TLP) have the same goal of ending incidents of blasphemy around the world, however methodologies to deal with the issue are different.

“Will expulsion of French ambassador and cutting ties with them will stop this (blasphemy)? Is there any guarantee that no one will do it again? I know the West, if Pakistan does it (expels the French envoy), some other European country will repeat it in the name of freedom of expression,” the prime minister said in his televised address to the nation. “When we expel the French ambassador and cut ties (with France), it means we will cut ties with whole of European Union. This means half of our textile exports will come down. This will create unemployment and rupee will be under pressure thus creating inflation and poverty. We will be on the losing end, not France,” he argued.

He said though the objective of both the government and the TLP is to stop incidents of blasphemy, the latter’s approach is counter-productive. “Contrary to the TLP’s strategy of getting the demands fulfilled through agitation, I am of the view that the heads of all Muslim states should make it clear at the forums in European Union and Western states as to why the Muslims get hurt by the blasphemy,” he said. “The West does not understand. They do not even love the prophets the way we do with our Holy Prophet (Peace Be Upon Him). Even, they are not attached to the religion (the way we are). They will have to be made it to understand,” he stressed, maintaining that the protest demonstrations will make a difference only to Pakistan, not France. “I also desire that there should be no blasphemy but the difference is about the method,” he added.

The prime minister said the whole Muslim world’s collective voice and threat for trade boycott can put a stop to blasphemy as protest demonstrations only in Pakistan will damage nothing but the country’s economy.

“Around 1990, Salman Rushdie wrote a book in which he disrespected our Prophet. The public came out on Pakistani streets, the American embassy was attacked and people were martyred too. After that, you can see [in history] that after every few years, someone in any Western country does blasphemy against him. Muslims are hurt, there are reactions abroad too and demonstrations here in our country as well but the same process continues after every few years,” he said. “Has this approach made any difference?” he asked, saying the TLP is protesting in the manner seen in the past as well. “It appears as if one party loves Holy Prophet (PBUH) more than other Pakistanis,” he wondered.

He noted that no such demonstrations or demands to expel the French envoy have been seen in other Muslim countries. He said his government has been engaged with and explaining the same to the TLP for the past two-and-a-half months. He added that although the government had agreed to their demand to take the matter to the National Assembly, “we saw that they were mobilising and preparing to come to Islamabad”. “Even as talks were continuing, it emerged that they have already announced that they will stage a sit-in in Islamabad if the French ambassador is not expelled. That is what broke off the talks and they were arrested,” he added.

Referring to damages during protest demonstrations by the TLP, the prime minister said four police personnel were killed in the riots and another 800 injured, besides damage to public and private properties. He further said the blockage of nearly 100 roads when the protest started had prevented oxygen cylinders from reaching Covid-19 patients, resulting in their deaths. “And then Pakistan’s enemies jumped in from abroad.

From the 400,000 tweets we have analysed so far, 70 per cent were from fake accounts,” Imran added. “We got to know that there were 380 Indian groups which were circulating fake news through Whatsapp that a civil war has broken out in Pakistan,” he lamented. It is unfortunate that the opposition political party Jamiat Ulema-e-Islam-Fazl also got involved in the issue to destabilize the government and damage the country, he added.

The prime minister stated that Jews were less in number but they made it clear to the Western world that no negative comments should be made against the holocaust in which Jews were massacred. The Western media cannot talk against holocaust and in four European countries, people can be put in jail for talking against it (holocaust), he explained. “We have to work collectively and make the world realize about the sentiments of Muslims. I will lead the campaign and will not disappoint the nation and the Muslims, and the West will one day realize that what it is doing is wrong,” he added.

He asked the ulema to support government as violence is damaging the country. The enemy takes benefit of chaos in the country and the nation suffers, he added.