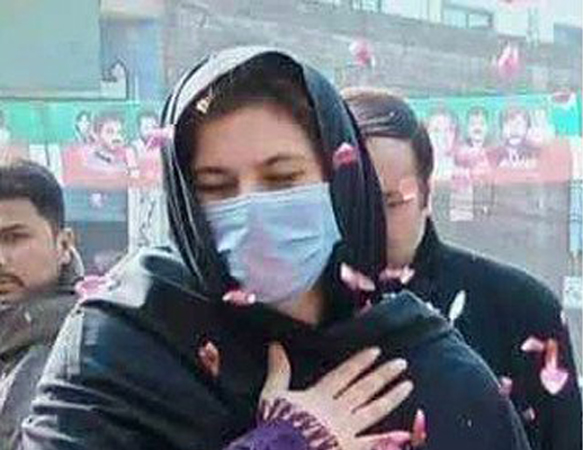 Pakistan Muslim League-Nawaz (PML-N) candidate Nosheen Iftikhar on Saturday clinched victory on NA-75 Daska seat of the National Assembly in a hotly contested by-polls, according to the unofficial and unconfirmed results.

According to the unofficial and unconfirmed results of all 360 polling stations, PML-N’s Nosheen Iftikhar secured 111,220 votes as compared to Pakistan Tehreek-e-Insaf (PTI) candidate Ali Asjad Malhi, who bagged 92,019 votes.

The polling started at 8 am and continued till 5pm without any break. As many as 360 polling stations had been set up for the polls in the constituency where 4,94000 registered voters exercised their right to vote.

The day remained largely uneventful, barring a few claims and counter claims by the top two contending parties. PML-N’s Nosheen Iftikhar claimed a person was caught casting a bogus vote by the presiding officer himself. Her chief opponent, PTI’s Asjad Malhi accused PML-N of trying to influence the outcome by moving people from outside the constituency to NA-75. Both candidates, however, were satisfied overall with the arrangements made for the polling this time around.

Rangers were on patrol duty, ensuring the transportation of election staff and material, while army troops were stationed in Daska Stadium and were available on call. To make the conduct of the re-poll transparent, CCTV cameras were installed at 47 sensitive polling stations.

Police on Saturday arrested nine armed men associated with the PML-N and the PTI near the polling station during the by-election in NA-75 Daska. The armed men were taken into custody by Satra police over violation of Section 144 in Aguchak area of Daska, slapped by the district administration to ensure law and order during by-poll. Police said that the arrested persons included PML-N and PTI workers. Kalashnikovs, two pistols, a rifle were recovered from the arrested persons while two vehicles of the accused were also seized by the police.

During the day, the ECP issued a show-cause notice to PML-N MPA Zeeshan Rafique for violating the election code of conduct. The district election commissioner also sought an explanation from the MPA within a day. On the other hand, the district monitoring officer of NA-75 Daska issued show-cause notices to PML-Q leader Chaudhry Saleem Bariar and Special Assistant to Punjab CM Firdous Ashiq Awan for violating the code of conduct. PML-Q leader Bariar on April 9 had announced a development package of Rs500 million for the constituency and Awan had announced the package for the constituency during a press conference. “The announcement of development packages for the constituency is a violation of the code of conduct,” the election commission said. The district monitoring officer sought a reply from both within two days.

The constituency’s returning officer has also replied to the PML-N candidate, who a day earlier had submitted an application to the chief election commissioner, alleging that certain presiding officers had been tasked by her opponents with casting bogus votes in around 100 polling stations. The RO said that special instructions have been issued to the presiding officers to be fair and responsible in discharging their duties and that the election commission’s monitoring teams are closely monitoring all election factors.

Punjab government spokesperson Fridous Ashiq Awan said that in line with the directions of ECP, the provincial government took all-out steps to ensure free and fair elections. However, despite the all steps taken by the authorities, she said in a press conference, many irregularities were witnessed during the polling. “Goons of PML-N tried to sabotage the law and order in the area,” she alleged.

The spokesperson said the ruling PTI did not contest election against a political worker but “land grabbers and drug peddlers”. “PML-N believes in rigging and they don’t have nerves to accept their defeat.”

The NA-75 seat fell vacant after the death of PML-N MNA Syed Iftikharul Hassan alias Zahry Shah in August 2020. The by-poll was delayed for six months due to the Covid-19 pandemic. The ECP had withheld the results of the Feb 19 by-poll in Daska due to violence, rigging and the disappearance of over 20 presiding officers and ordered a re-election in the entire constituency.

The ruling party had challenged ECP’s decision to reschedule the by-poll in the Supreme Court (SC) and had sought suspension of the order. However, on April 2 the Supreme Court rejected the PTI’s appeal against the directives of the ECP for re-polling in the constituency of NA-75 and maintained the country’s top electoral body decision to schedule a fresh election on April 10.