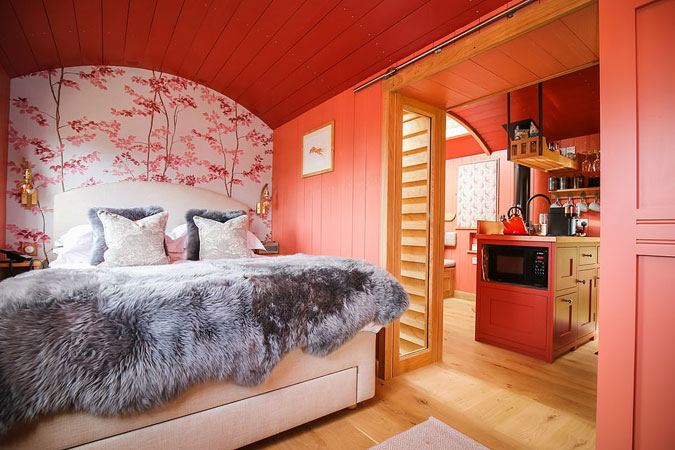 Shepherds didn’t have it anything like this good. These days, their once-simple huts – long established on luxury camping sites and farms – are popping up in the grounds of upmarket hotels and pubs, where guests can do everything from feast on meals from Michelin-starred kitchens to take gin-making classes before a soak in a roll-top bath and retiring to a king-size bed. They don’t come cheap, but for a special occasion they’re hard to beat.

The most luxurious examples opened in December at Lympstone Manor in Exmouth, Devon, where five woodland huts come with hand-painted wallpaper, double glazing and glass panels in the roof for star-gazing. Each one is actually made up of two huts joined together, so there’s plenty of space for a family.

For an extra-special stay, take the two-minute buggy ride to the Georgian mansion for an eight-course meal created by Michelin-starred chef Michael Caines. For simpler options, there’s a kitchenette or you can order an in-hut hamper.

The hotel, which is on the coastal path, is adding a pool this year, or you can take a dip on your own terrace in an open-air bath or wood-fired hot tub.

It’s all pretty idyllic, although you need deep pockets to stay here: a night costs from £408 for two, with breakfast

Over the border in Cornwall, the recently opened Pig at Harlyn Bay has four garden wagons perfect for a romantic break on the coast – it’s just a ten-minute walk to the beach and some beautiful seaside strolls along the North Cornwall shore.

The rustic-chic interiors have wooden floors and walls, a sofa for snuggling in front of the wood-burning stove and an open-air shower plus free-standing bath in the bathroom. Don’t miss the superb seafood at the Lobster Shed alfresco restaurant, which proudly sources all of its food from within a 25-mile radius.

The wagons cost from £295 a night for two without breakfast.

You’ll be counting llamas, not sheep, when you stay at the five recently opened shepherds’ huts at The Merry Harriers in Hambledon, Surrey. This 16th Century inn has a herd of resident llamas, which accompany guests on walks and will even carry a picnic hamper.

There are eight in all, from cheeky Louis to nosy Toffee – though you might see double that number after making your own gin at the Village Spirit Collective distillery across the road.

Go hiking and biking from the door and explore the nearby Devil’s Punch Bowl and Box Hill.

The cosy huts, in a field with a pond, come with a log burner and a fire pit outside. Better still, they are dog-friendly, as are some of the llamas. B&B doubles from £195 a night.

The animals get even more exotic at the Port Lympne Hotel and Reserve in Kent, where you can fall asleep to the sound of roaring lions and tigers after toasting marshmallows around the fire pit.

Perfect for a family adventure, the grey and white Pinewood Shepherds’ Huts are stylish and spacious, with room to sleep two adults and two children. What’s more, when you stay you get exclusive access to the safari park before it opens to the general public. Each hut comes with a golf buggy for transport, there are plenty of restaurants on site and a safari experience is included in the price, which starts at £249 a night for four.

You can row out to a secluded island on your own private lake when you stay at the signature cabin at The Fish Hotel near Broadway in the Cotswolds.

The romantic Boaty McBoatface books up fast as it is the only one of ten shepherds’ huts to have lake access. All the Hilly Huts and larger Hideaway Huts are adults-only and have a Scandi-chic stripped-back style, with underfloor heating plus wood burner.

Kit yourself up in the boot room before exploring the 400-acre estate, then tuck into seafood in the restaurant in the main lodge before settling down to watch a movie in the screening room. Or help yourself to a drink from the complimentary bar to go along with a relaxing soak in the hot tub on an outside deck. A night’s B&B for two costs from £285, or £385 in Boaty McBoatface.

Also in the Cotswolds, the Artist Residence in Oxfordshire has a hut tucked away at the end of its garden. Like the rest of the boutique hotel, this quirky bolthole for two is beautifully done out with vintage furniture. Explore the area using the hotel’s bicycles, or relax in the garden.

The poet Dylan Thomas used to look in for a pint in the beamed bar when he lived nearby, and it still makes a great place for a drink or two at the end of the day before supper from a menu of pub classics. From £145 a night, room-only

Soak up the sea views when you stay at Monk Haven Manor B&B on the Pembrokeshire coast. The single shepherd’s hut stands at the top of the valley and has outdoor chairs and table positioned for guests to gaze at the secluded cove.

The sea-green and pine interior comes with a log burner but also has solar power, which means that while you won’t be able to use a hair dryer, you will be able to cook on the hob or store food in the fridge. Alternatively, order a deli hamper for supper and let someone else do the hard work.

There are more watery views at the riverside shepherd’s hut belonging to the Victorian House Hotel in the village of Grasmere in the Lake District.

Start your day gently, watching the river trickle past outside as you lie in bed, and wind down before bedtime by sitting by the fire pit on your own parcel of riverbank. The secluded cabin lies at the foot of the hotel’s garden and has French doors, vintage furniture, original art and a bathroom with a Victorian roll-top bath.

Head out for a hike and explore the country that William Wordsworth helped make famous – look in at St Oswald’s Church to see his tomb. Be sure to pop into Sarah Nelson’s Gingerbread Shop, too, to stock up on goodies. Cyclists are well catered for: the hotel has bike washing and bike storage.

While hotels and B&Bs have been busy adding shepherds’ huts in their grounds, those on farms and camping sites have also upped the luxury stakes.

The pair of Catkin Huts on a 400-acre working farm near Dorchester in Dorset feel more like beautifully designed hotel suites than cabins, with glass walls, cocktail trolleys and swish kitchenettes.

Go wild swimming in the lake to work up an appetite for restaurant-style meals that you can order from a local chef.