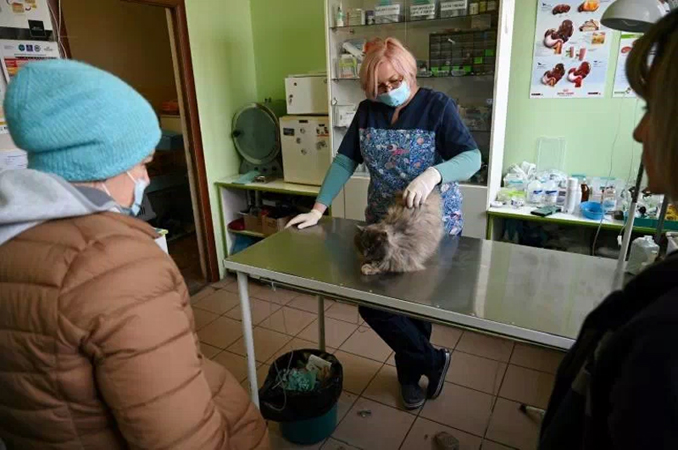 Galyna Lekunova, a veterinarian in the eastern Ukrainian city of Mariupol, was left fuming by a new law in January mandating the use of Ukrainian in the service industry.

In protest against the regulations that she said amounted to “discrimination,” the 47-year-old began offering 50-percent discounts to her Russian-speaking clients.

This is what she believes spurred the perpetrators of a graffiti attack on her clinic, which was defaced in late January with scrawls of black coffins and a warning of “Death to the enemies”.

One month later, the paint was still visible on a poster of a puppy advertising her services in Russian in the industrial port city on the Sea of Azov.

“If I work, pay my employees’ salaries and my taxes, it’s none of your damn business which language I do it in,” Lekunova, wearing a floral-patterned apron, told AFP.

The incident in Mariupol, some 20 kilometres (12 miles) from the front line of Ukraine’s war with separatists backed by Moscow, reflects a deeply-felt language divide in the ex-Soviet country of 40 million people.

Lawmakers in 2019 passed legislation to cement Ukrainian as the country’s primary language, ordering middle schools that taught in Russian and other minority languages to make the switch and mandating Ukrainian versions of online stores.

An article of the laws that entered into force in January goes further, obliging shops, restaurants and the service industry to engage customers in Ukrainian unless clients specifically ask to switch.

Anyone caught violating the new legislation twice within one year could be fined 200 euros ($235), almost half of the average salary in the country. No one has been penalised so far. Officials in Kiev say the initiative aims to revitalise a national language that was subjugated first during the Russian Empire and then in Soviet times.