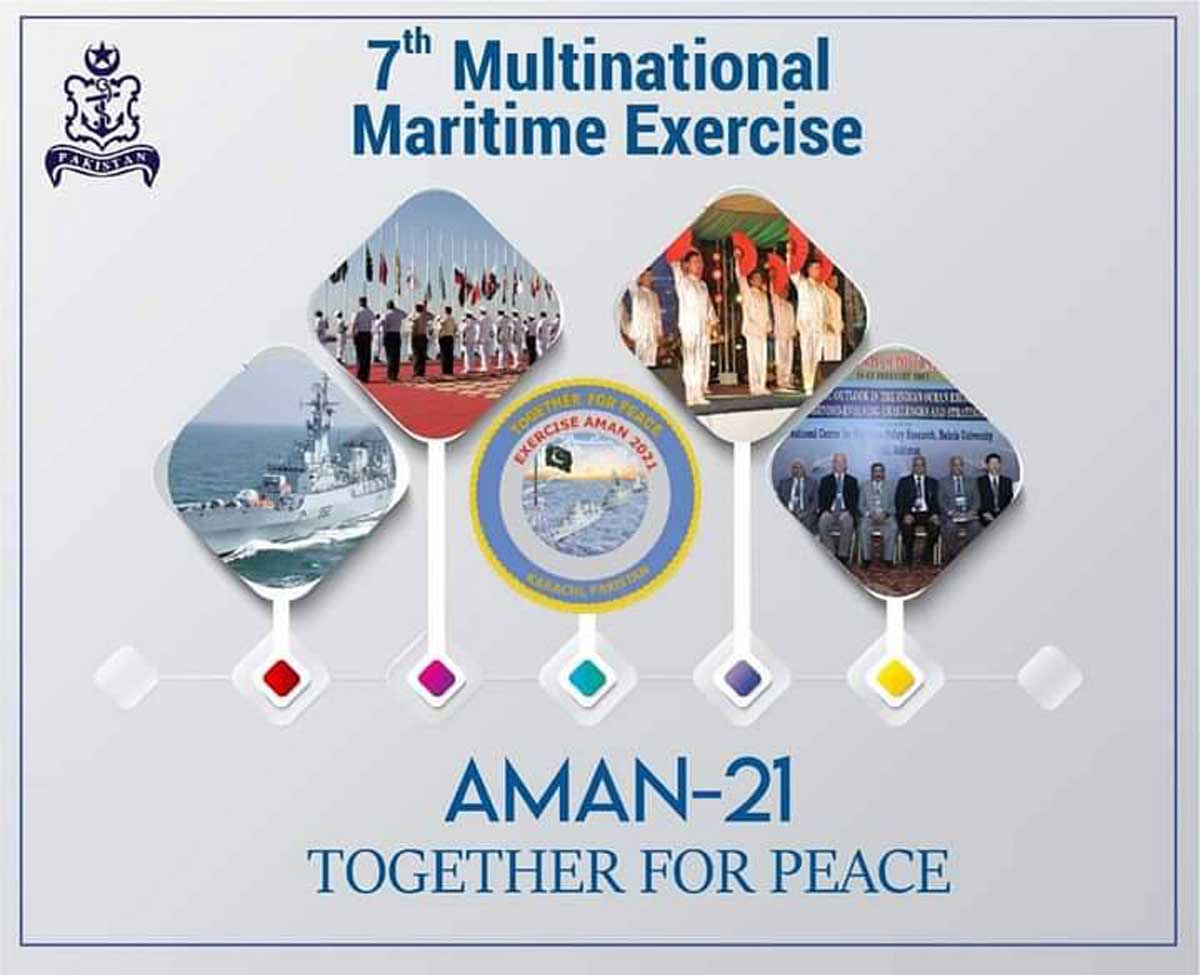 With its tag line, “together for peace” resonating powerfully in the far reaches of the Indian Ocean region and beyond, the 42-country multinational mega biennial exercise AMAN-21 of Pakistan Navy concluded this February 16. A grand international fleet review was held in the North Arabian Sea on the culminating day. With dozens of warships representing wide-ranging countries and stationed in a massive formation natively called, “AMAN formation, the imposing finale was witnessed by the President of Pakistan, Dr Arif Alvi. He was joined by the Federal Minister for Maritime Affairs, Minister for Defence Production, Chief Minister Sindh, Chairman Joint Chiefs of Staff Committee, Chief of the Army Staff and the Chief of the Air Staff. This was besides the Emissaries of various countries in Pakistan. The traditional AMAN formation denotes, “unity and collective resolve”.

The proceedings on the final day were reviewed by dignitaries while on-board, PNS MOAWIN. The name of the ship, PNS MOAWIN, itself signifies collaboration or coming together. Jointly constructed by the Pakistan navy with a Turkish firm at local, Karachi Shipyard and Engineering Works (KS&EW), the ship stands as the pride of the nation. It was commissioned as recently as October 2018 and aptly symbolised the spirit that underpinned AMAN-21.

“I often queried why my success should come as someone’s failure or why would my success mean that someone must lose. There has to be a way where we all can win and because this goes against the established thinking and psychology, therefore it needs a paradigm shift. Let’s come together; understand each other, and fight the common enemy”, was the clarion call given by Chief of the Naval Staff, Admiral Muhammad Amjad Khan Niazi on the occasion of curtain-raiser for AMAN-21 on 12 February. On this occasion, a record number of naval and marine officers, ships and air unit crews as well as observers from various countries witnessed the stirring flag hoisting ceremony at Pakistan Navy Dockyard, Karachi. These included representatives from, China, Russia, Indonesia, the United States, United Kingdom, and Iran, Sri-Lanka, Turkey, Malaysia and other ASEAN states as well as African Union, EU, GCC and NATO.

The most striking feature of AMAN-21 was the presence of the Russian Navy. It was an ice-breaking moment with arch-rival, the United States Navy showing presence alongside. The last time the Russian Navy conducted joint military drills with NATO members was in the “Bold Monarch” exercise in 2011. This move-in AMAN-21 did not go unnoticed. Tributes were aglow, even from across the border. “I must commend Pakistan Navy for holding such a large-scale exercise in the post-Covid period. One of your (Pakistan Navy) greatest achievement, as one must learn from all and everyone, is to bring Russia and United States together on a single platform; for that alone, Pakistan and Pakistan Navy deserve rich tributes. It becomes singular since the two countries (Russia and the United States) have been hostile and at odds since 2014—and for this, you (Pakistan Navy) can comfortably add another jewel in its crown”, so remarked Lt Gen KJ Singh during a live video conversation on a private television network.

AMAN-21 was split into two phases of harbour and sea. The former seminars, symposiums, discussion sessions, international get-together, and cultural festivities to showcase Pakistan as an opulent society with great traditions were profitably held. In the next phase, tactical manoeuvres and exercises like anti-piracy, counterterrorism and search and rescue missions etc. were conducted at sea.

AMAN-21 aimed to strengthen and develop cooperation among world navies in order to promote regional stability and to counter common maritime threats. It was a rare opportunity for participating countries to rub shoulders with global counterparts putting aside their differences to work towards a common cause, develop synergy and doctrinal interoperability to fight unconventional threats.

The high point on closing day was the international fleet review in which the formation of ships conducted manoeuvres while marine and Special Forces and air elements displayed their skills. There were Para jumps and a flypast by Pakistan Navy aviation as well as Pakistan Air Force. Aircraft from participating countries too flew past over the AMAN-21 formation.

Earlier, the message of Chief of the Naval Staff, Admiral Niazi was read out during the Opening Ceremony. In his message, the Admiral warmly welcomed the participants of the exercise, the seventh edition in the AMAN series commandeered by the Pakistan Navy since 2007. ‘AMAN-21 will provide a medium to develop doctrinal synergy to tackle maritime security challenges and to enhance interoperability amongst navies at different pedestals of technological prowess to come together and secure a sustainable maritime environment’, read the message.

On 13 February, the Chief of Naval Staff, Admiral Niazi paid a visit on-board the Indonesian, Russian and Sri-Lankan naval ships. The senior officers and each commanding officer of the visiting ships received Naval Chief in a befitting manner. They deeply appreciated the enduring efforts of the Pakistan Navy in mustering global navies and working towards the shared commitment of maritime peace, stability and legitimate order at sea.

The highlight of the first phase of the exercise, 13 to 15 February was devoted to International Maritime Conference (IMC-21). The conference brought together a wide array of distinguished international and national scholars as well as subject matter experts. The scholars addressed large multinational gatherings. Under the overarching theme, “Development of Blue Economy under a Secure and Sustainable Environment: A shared future for Western Indian Ocean”, the erudite speakers proffered creative solutions to oceanic problems afflicting the region. Notable luminaries included Secretary-General IMO, President J&K, Dr. Gunter Pauli and Senator Sherry Rehman. Commander US Naval Forces Central Admiral Samuel Paparo delivered his keynote address. His talk, “Enhancing Regional Maritime Security in the Western Indian Ocean Region through Effective Mechanism”, was instructive. Dr David Brewster of the Australian National University talked about the challenges and opportunities in changing maritime dynamics of the Indian Ocean region and its implications for regional states.

The second day of the conference saw the presence of Special Assistant to Prime Minister, Dr Moeed Yusuf as chief guest during the pre-lunch session. Eminent speakers shed light on the “Need of Maritime Security and Sustainable Growth-A Shared Vision for Western Indian Ocean region”. In his keynote address on, “BRI and its implications on maritime security in the Indian Ocean region”, Dr Nong Hong, Executive Director of China America Studies, USA, underlined the need for stability in the region in the wake of non-traditional security threats where interests of multiple stakeholders converged. In the second session, the federal Minister for Maritime Affairs, Mr Syed Ali Haider Zaidi was the chief guest. Scholars presented their thoughts on, “Development of Pakistan’s Maritime Sector and Blue Economy”.

In the last session on 14 February, the discussants alluded to the “contemporary strategic environment related to the Indian Ocean region and opportunities for regional cooperation”. Renowned Senator Mushahid Hussain shared his views on, “Building strategic partnerships”.

With progressing geopolitical shifts in the Indian Ocean region and its peripheries, maritime security has assumed a distinctive significance for Pakistan. A stable order in the region has now become an indispensable need for the country. With the upcoming port of Gwadar projected as a regional hub and transhipment port in the wider Indian Ocean and given the external machinations against CPEC, maritime security was never so critically important to Pakistan as now. Gwadar is tipped to become the hub of trade connecting South Asia, the Middle East, Africa and Central Asia.

Perhaps the finest tribute to AMAN-21 came not from within Pakistan but outside, from the eastern neighbourhood. “India’s Pakistan policy seems to have landed in a cul-de-sac. It lacks credibility and has no future. A course correction is overdue. AMAN-21 makes a mockery of India’s aspiration to be a ‘net security provider’ for littoral states in the Indian Ocean. The participation of Bangladesh and Sri-Lanka in AMAN-21 speaks for itself”, asserted Ambassador M.K. Bhadrakumar in his column on February 17, 2021.