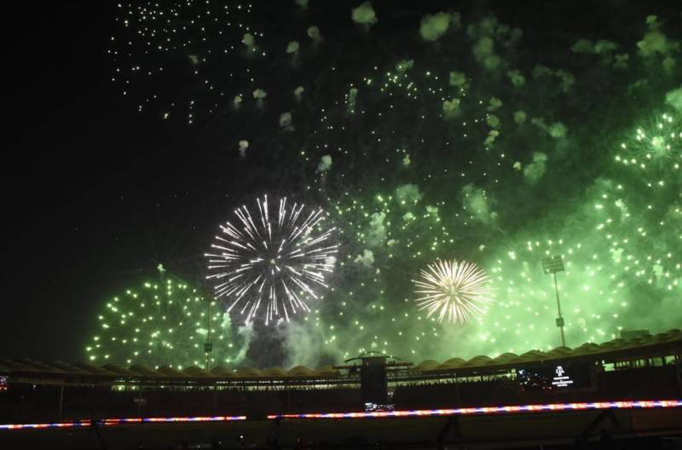 KARACHI: The sixth edition of the Pakistan Super League (PSL) kicked off in here on Saturday with a vibrant, colourful and star-studded opening ceremony. Pakistan Cricket Board Chairman Ehsan Mani kicked things off by welcoming international players to the country. “We welcome you to Pakistan and know that you will take back very fond memories of your stay here and look forward to seeing you again next year.” He added this year the matches would only played in Karachi and Lahore. “Only 7,500 people will be able to attend matches in Karachi and 5,500 in Lahore due to the coronavirus,” he said, adding that he was hopeful the situation would improve and allow more fans to attend matches. He also thanked the fans for making PSL a success, while also expressing his gratitude to the sponsors of the tournament. He added that the tournament would not have been possible without the cooperation of the provincial governments and law enforcement agencies. He concluded his speech by wishing all six franchises luck in the tournament.

Pakistan singer Atif Aslam was the first to light up the stage, performing a medley of his greatest hits. Accompanied by backup dancers, he showed off his dancing prowess with a captivating performance. Singer Imran Khan took things to another level, belting out his massively popular single ‘Amplifier’ alongside Humaima Malick. But the highlight of his set had to be Imran’s single ‘Bewafa’ which had those watching at home singing their hearts out. Last but definitely not the least were the stars of this year’s PSL anthem, Naseebo Lal, Aima Baig and Young Stunners. The singers showed off their electric stage presence, demonstrating why the anthem was a perfect fit for this year’s tournament. The ceremony concluded with a massive fireworks display.