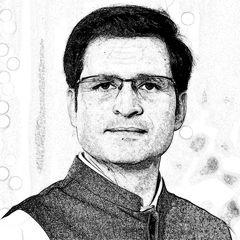 To be or not to be: Pros & cons of recognizing Israel

The recognition of Israel has put the Muslim world in a dilemma and in particular Pakistan. The ‘to be or not to be’ takes twists and turns on its own. Recently the reports, circulating amongst the masses, created a frenzy over a possibility of the present government of Pakistan Tehreek-i-Insafto contemplate prospects of Israel recognition. The reports though falsified raised a question of the age-old Shakespearian dictum, “to be or not to be”, blurrily translating into “to recognize or not to recognize”. Despite having religious, moral, political, ethical and legal reservations against the Israeli occupation of Palestinian land, it is a curious matter inspiring fascination in the Pakistani populace of how a relatively tiny Israel has its larger oft-antagonized Arabic counterparts at bay. Having affirmed that; the course of this piece shall weigh the pros and cons of recognizing Israel through the lens of policy.

Conducting a cost-benefit analysis and keeping in view the importance of championing the Palestinian cause, recognizing Israel might be beneficial in three areas, viz. political, strategic and economic standings of Pakistan.

Politically, Pakistan may score points in its favor, with major Israeli backer that is the US. It’s a known fact that Americans are very pro-Israel. Its not that they love Israel. Its perhaps they don’t like Arabs. Moreover, Israel lobby in the US policy-making corridors is very strong. Recognition of Israel will have not only the US support but also the pro-Israel lobby. This will in-turnremove Pakistan-US relations from the roller-costar mode to strong bilateral relations with an enlightened moderation.

If Israel is a Jewish ideological state, Pakistan is a Muslim state not an Arab state to succumb to a selected Arab pressure

Recognition may prove to be advantageous when it comes to Pakistan’s major rival state; India. Israel happens to be an influence not only on the US but India as well. India and Israel’s trade relations are expansive. Strategically, India has been a defense partner of Israel with Delhi’s modernization plans of its defense forces with Tel Aviv technology since 9/11. According to the Jerusalem Post, India purchased weapons of  $ 15b between 2001-2006 and $ 6b during 2012-2013 respectively from Israel. In just 2017 alone, according to Stockholm International Peace Research (SIPRI), India represented 49% of Israel’s arms export market, becoming the second most arms purchaser from Israel after China. With the recognition of Israel by Pakistan, Tel Aviv may either be influenced to halt the Indian purchases or Islamabad-Tel Aviv nexus may be developed to break the Indian monopoly. Pakistan’s fears that an Israel-India partnership will work against its interests may be curbed by creating ties with one of them. This will further rebalance the already disturbed strategic balance of South Asia.

There is a possibility that the frost-bitten conflict of Israel-Palestine can be maneuvered from a better standpoint if Pakistan exudes its presence as a less hostile entity. Recognition will not warrant friendship but a direct expression of disorientation against their wrongdoings. This might influence Israelis in their degree of actions against the Palestinians. If Tel Aviv wants friends in the Muslim world, it will have to provide for certain safeguards and not go to extreme ends like occupying West Bank with ‘Jewish Settlements’, rather focus on solving the conflict by finding a middle ground- two State solution. Political problem has political solution which takes place via negotiations. Occupation and usurpation doesn’t mean pace. It’s volcanic in nature. It may erupt anytime and play havoc with the world peace.

Economically, Pakistan would benefit with an upsurge in economy via establishment of trade relations, importing consumable products. Harvesting on the benefits of the large market that the state of Israel would provide is another plus. Israel also has advanced military and smart agricultural technology that caters to some of the most developed nations of the world and Pakistan upon maintaining diplomatic relations would be a potential recipient. One facet of this highly controversial debate may be that by recognition of Israel, Pakistan may be able to put an end to its indecisive standpoint of rendering India a “Most Favored Nation (MFN)”status while it carried out atrocities in Kashmir and fought wars with Pakistan. Conversely, there are strong rumors that Pakistan purchases ammunition from and has, via third party, products of Israel on its market. Yet and still it denies Israel the acceptance of its statehood.

Currently, 167 out of 193 UN member states officially recognize Israel. This also includes six Arab countries (Egypt, Jordan, Sudan, Morocco, UAE and Bahrain). Pakistan is amongst those 26 defiant countries who do not accept Israel officially. However, with recent surge of recognition in the Arab world, Pakistan is in a fix and taxing. Pakistan has very close and intimate economic ties with UAE and Saudi Arabia. Both of them are pressing Pakistan to go for Israeli recognition. “To be” would mean economic boons and “Not to be” would mean financial bane (penalties).  The pressure from countries that Pakistan enjoys friendly relations with, that Prime Minister Imran Khan loosely affirmed in a recent interview, would un-mount with recognition along with more economic concessions and stronger ties from/with countries like UAE and Saudi Arabia.

On the offside, acceptance of Israel brings a multitude of cons. Firstly, unless the government of Pakistan miraculously shifts the thought-paradigm of its masses by a 180 degree, even the prospects of recognizing Israel could prove disastrous. Widespread unrest would erupt, and religious factions would threaten the legitimacy and sanctity of the present government. Not only the religious leaders in the country would protest but those who uphold human rights would have a major say in such a revolt. This is substantiated by the fact that there is a fine line between recognizing Israel and maneuvering the conflict in Palestine’s favor and recognizing Israel and giving it legitimacy over Palestine thus siding with the violators of human rights.

The Kashmir issue being a do or die situation for Pakistan is another case where recognizing Israel may delegitimize its claim in the Valley. Indian atrocities in Kashmir are reflective of and present a mirror image of those carried out in Palestine by Israel. Thus, the affirmation of an apartheid regime in one country automatically reinforces the other. Otherwise, India especially will call out Pakistan for its dichotomous policies. In addition, as discussed above, Israel happens to be one of the major sellers of ammunition to India, some of which were used against Pakistan. This would not only check the first cost, i.e. mass protests and unrest but also the loss of credibility of Pakistan’s case vis-a,-vis Kashmir that appeals with to the international community.

Pakistan may also lose its aspired position of leader of the Muslim world when it denounces the sanctitude of Jerusalem (as capital of Israel automatically with recognition) having the world’s third holiest place for Muslims. By rendering recognition, Pakistan will give up its status not only as the leader of the Muslim world but also as one of the protectors of its causes. Having been created in the name of religion, Pakistan caters to its ideological roots and its ideologues by championing the causes of Muslims anywhere in the world. Thus, Pakistan might be on the road to delegitimizing its own existence by legitimizing that of Israel’s.

Arabs consider Kashmir as an issue of Pakistan. But Pakistan doesn’t consider Palestine an Arab issue. Being a Muslim state, Pakistan considers Palestine a problem of the Muslim world. Dissociating itself from the Palestinian cause will tantamount to withdrawing from the slogan of “Pakistan: A Fortress of Islam”.If Israel is a Jewish ideological state, Pakistan is a Muslim state not an Arab state to succumb to a selected Arab pressure. Both are based and created in the name of religions respectively. Religion (in any name) teaches peace. There can’t be harmony without justice. Peace deserves equal treatment to all irrespective of any discrimination. To be or not be is not the question here. Here, the question is recognition of Israel for accepting the legitimacy of Palestinians via right of self-determination as per UN resolutions. If Israel accepts a Palestinian State, recognition is not a question; it will be an answer.

The Author is the Chairman of the department of International Relations, University of Peshawar. Shaheed@uop.edu.pk