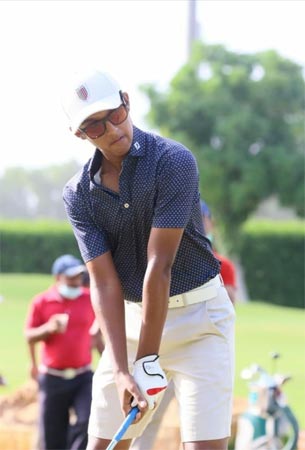 KARACHI: Karachi’s fast-rising schoolboy Omar Khalid propelled himself to the top of the leader-board with a superb round of one-under-par 71 on the second day of the 60th National Amateur Golf Championship here at the Karachi Golf Club on Friday. Omar, 16, who is one of the top junior players of the country, showed that he also belongs at the top level when he made five birdies to share the lead with Islamabad’s Salman Khan. Salman compensated his opening round score of 80 with the day’s best round of 68. Both Omar and Salman are placed at the top of the leader-board with identical 36-hole aggregates of 148. Omar’s solid round was instrumental in helping Sindh A to win the coveted Inter Association Golf Championship. The two-day championship which ran concurrently with the National Amateurs concluded on Friday.

Sindh A captained by Mansoor Teli and including Omar Khalid, Saim Shazli and Arsalan Shikoh aggregated 445 points, winning the trophy by nine strokes. Together with Omar, Arsalan (72) and Mansoor (76) made sure that Sindh A won the trophy. Defending champions Federal Golf Association made a stunning comeback on day two with the help of excellent performances from Salman Khan, Umer Khokhar and Yasir Khokhar. They finished second with an aggregate of 454. Punjab B finished third followed by Sindh B, Punjab A and KP. Meanwhile, among the amateurs, the trio of Omar Khalid, Salman Khan and Umer Khokhar stood out on day two of what is the most prestigious golf championship of the country. Salman was in top gear as he made seven birdies on his way to a stunning round of 68.

Omar, who won the 2020 Faldo Series Pakistan title, made birdies on holes 1, 10, 15, 16 and 18. Islamabad’s Umer Khokhar, the reigning Pakistan No. 1, was also in great form firing a round of 71 to stay in contention for the title. Another top performer of the day was Karachi’s Arsalan Khan who played a par round of 72.

Following is the amateurs’
leader-board after the second
round on Friday: