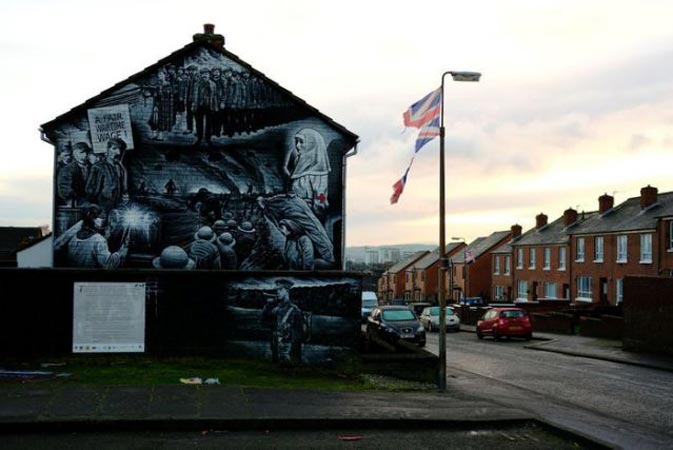 As Northern Ireland’s unionists prepare to celebrate 100 years since the state’s creation cemented their place in the United Kingdom, post-Brexit trade barriers are triggering their deepest fears: being cut off from Britain and pushed towards a united Ireland.

The British-run region remains deeply divided along sectarian lines, with Catholic nationalists aspiring to unification with Ireland while Protestant unionists seek to retain the status quo.

Nearly 23 years after a 1998 peace deal ended three decades of confrontation between the Irish Republican Army, pro-British “loyalist” paramilitaries and the British military, it is customs declarations and phytosanitary certifications that are now the focus of unionist angst.

From Friday, many British goods entering the smallest of the United Kingdom’s four nations will require customs checks and paperwork under Britain’s withdrawal deal with the European Union – which keeps Northern Ireland in the UK’s customs territory but also still aligned with the EU’s single market for goods.

Many unionists are fiercely opposed to a compromise championed by British Prime Minister Boris Johnson and the Irish government that will keep trade across the 500-km (300-mile) open land border with EU-member Ireland frictionless by effectively placing a customs border down the Irish Sea.

“I think it’s a disgrace,” Mervyn Gibson, grand secretary of the influential Protestant Orange Order organisation, told Reuters outside his Belfast home, where Britain’s Union Flag flies above the doorway.

“We should be treated equally whether we live in Devon or Cornwall (in England) or Antrim or Down (in Northern Ireland). We’ve been let down and indeed betrayed by the prime minister who promised us there would be no border down the Irish Sea.”

The vast majority of the 30,000-member Orange Order – who hold large and sometimes divisive marches each year to celebrate centuries-old military victories – are bewildered and angry that Brexit has “made Northern Ireland a place apart”, Gibson said.

Calls for Irish unity have increased since the 2016 Brexit referendum, when Northern Ireland voted 56%-44% to remain in the EU, though most opinion polls suggest the prospect remains distant for now.

Under the 1998 Good Friday Agreement, the British government can call a “border poll” if it appears likely a majority of those voting would seek to form part of a united Ireland. Unionist politicians remain dismissive.

“I’m 50 this year and ever since I was a child I was told the united Ireland is coming,” Northern Ireland First Minister Arlene Foster told Reuters on Wednesday.

“It never has come because, at the heels of the hunt, people realise that they are much better off in the United Kingdom than they are within the Republic of Ireland or within a European superstate.”

PLACE IN THE UNION

Foster’s Democratic Unionist Party says it will lobby the British government hard to limit post-Brexit barriers, fearing a reorientation of parts of the economy towards the Irish Republic could undermine Northern Ireland’s place in the union.

With border control posts due to be erected next year, the overwhelmingly Protestant port town of Larne could be one of the first places where the psychological impact of Northern Ireland being treated differently to the rest of the UK is felt.

Unionists there celebrate their identity by painting road edgings in the red, white and blue of the British flag or erecting pro-British murals. An 8-metre steel crown celebrating Queen Elizabeth’s diamond jubilee sits on a roundabout in the town.

Local unionists are concerned but mainly bemused by it all, says David Hume, a historian and former member of Northern Ireland’s Flags and Culture Commission, a body set up after the curtailing of a century-old tradition of flying the British flag over Belfast City Hall in 2012 led to weeks of rioting. “You can’t see the Irish Sea border, it’s all happening on paper. If it starts to hit them in their pockets, that’s the sort of thing that will make them very annoyed and quite truculent,” said Hume.

“Unionists will be very suspicious as to the longer term.” But where unionists are unsure of what Brexit will mean in practice, nationalist politicians sense an opportunity to press their case that Irish unity is the logical destination.