China to further open its doors for Pakistan: envoy 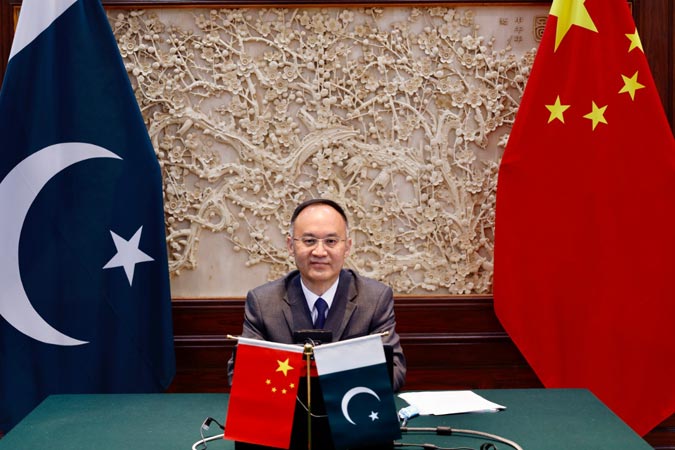 Chinese Ambassador in Pakistan Nong Rong on Monday said that his country will steadfastly expand opening up and explore more opportunities for Pakistan in the next 5 years.

Addressing the virtual Sixth China-Pakistan Economic Corridor Media Forum, the ambassador said as a pilot project of Belt and Road Initiative (BRI) and a demonstration project of China-Pakistan cooperation, CPEC plays a significant role in promoting the in-depth development of the all-weather strategic bilateral cooperative partnership. He said CPEC has been highly valued and sincerely safeguarded by all sectors of society in China and Pakistan as it meets the people’s aspiration, wins hearts and promotes livelihood.

H said China will uphold the concept of openness, cooperation, solidarity and win-win spirit to help Pakistan achieve its development. “We appreciate the efforts of Pakistan’s government to build ‘Naya Pakistan’, and will deepen exchanges with Pakistan on governance, share experience in poverty alleviation and reduction, help Pakistan develop industrial manufacturing, attract more foreign investment, promote the alignment of development strategies between the two countries, and work together to build a Closer China-Pakistan Community of Shared Future in the New Era,” he added.

The ambassador said media as the expositor, promoter and disseminator of CPEC, plays a unique and important role. “In recent years, China and Pakistan have created a series of mechanisms and platforms for cultural and media cooperation. Under the framework of the Joint Cooperation Committee of CPEC, a joint working group on international cooperation and coordination has been set up to encourage the media and think tanks of the two countries to strengthen cooperation and provide intellectual support for the construction of CPEC,” he said. “Since its inception in 2015, CPEC Media Forum has brought together the governments, business communities, media, think tanks and other sectors of China and Pakistan to focus on the construction of the CPEC, tell stories of China-Pakistan cooperation, and spread the spirit of mutual support, openness, equality, mutual benefit and win-win cooperation, making important contribution to promoting the heart to heart exchanges of the two peoples and economic and social development of China and Pakistan,” he added.

He said in the next five years, China will promote the high-quality development of BRI and advance CPEC projects with high standards. “As an important pilot project of BRI, CPEC should seize the opportunity to take the lead in achieving high-quality development and benefit more from the new development pattern of the ‘Dual Circulations’,” he said. “Based on successful construction and operation of existing projects, we will tilt resources towards industry, agriculture, science and technology, and people’s livelihood, so that the achievements of CPEC will benefit more ordinary people in Pakistan,” he added.

Addressing the forum, Senate Chairman Sadiq Sanjrani said, “The second phase of CPEC is set to boost China-Pakistan cooperation in agriculture and industrialization through the establishment of special economic zones. The zones will play a pilot role in Pakistan’s fight against poverty.” He thanked China for sharing its experience of development with Pakistan. “Media has played a very important role in publicity of facts on CPEC which has resulted in CPEC becoming a household name in Pakistan,” he added.

Pakistan’s Ambassador to China Moin ul Haque said it is imperative that media organizations and opinion makers of two countries devise a dispassionate, concerted and sustained media strategy to expose ill intentions of adversaries and highlight the success and significance of CPEC. “No media strategy is successful without stirring hearts of our peoples to the symphony of friendship. The media houses of Pakistan and China should undertake a fair and objective assessment of BRI and highlight its universal legitimacy and success,” he added.

Senator Mushahid Hussain Sayed, Chairman of Senate Committee on Foreign Affairs, emphasized the resilience of CPEC despite the Covid-19. CPEC has been on track in this difficult year and nobody has been laid off, he added.

Zheng Qingdong, President and Editor-in-Chief of Economic Daily, said that since the outbreak of Covid-19, media practitioners from both China and Pakistan have been in the frontline of reporting the latest developments of the epidemic, spreading knowledge on epidemic prevention and control, and writing touching stories of cooperation to convey confidence and hope to the two countries and the international community. “As CPEC is entering a new phase of high-quality development, we hold that media is playing an irreplaceable role, and there is a broad space for media cooperation between the two countries,” he said.

Senator Azam Khan Swati, Federal Minister for Railways, highlighted the importance of ML-1 project of CPEC and its importance for Pakistan, its industries and the economy.

An award ceremony of the third “CPEC Golden Anchor Award” was also held at the end of the forum. Totally seven media staff were awarded the prizes for their contributions in strengthening CPEC and China-Pakistan friendship in the extraordinary times.

After six years of development, the forum has now grown into an indispensable exchange platform for the Chinese and Pakistani media with the biggest influence and most remarkable achievements.