Seven soldiers martyred in exchange of fire with terrorists in Balochistan 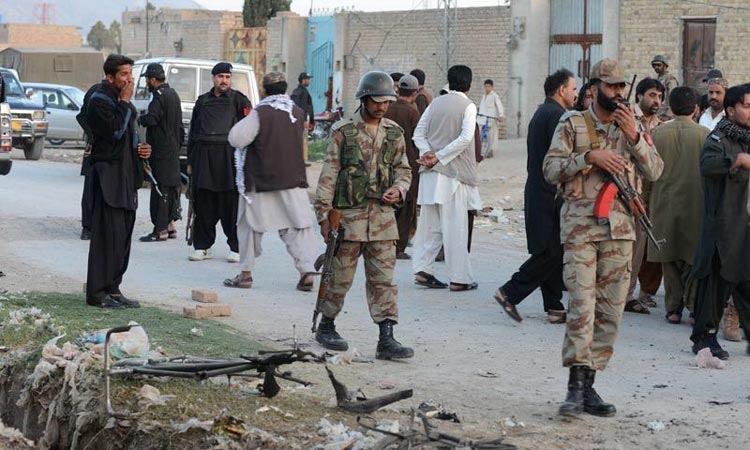 As many as seven valiant soldiers embraced martyrdom while repulsing terrorist attack on a Frontier Corps (FC) post in Sharig area of Harnai in Balochistan late Saturday night.

“The security forces cordoned off of the area whereas escape routes were blocked to apprehended fleeing miscreants. A large scale search and clearance operation is in progress,” the ISPR said. “Such cowardly acts by inimical elements backed by anti-state forces will not be allowed to sabotage hard earned peace and prosperity in Balochistan. The security forces are determined to thwart their (terrorists) nefarious designs at all costs,” it added.

President Dr Arif Alvi Sunday strongly condemned a terrorist attack on Frontier Corps check post in Harnai area of Balochistan province in which seven soldiers embraced martyrdom. According to a press release, the president expressed his deep grief and sorrow over the death of soldiers. Expressing sympathies with the bereaved families, the president prayed for the high ranks of the martyred soldiers and for the bereaved families to bear the loss with fortitude.

While condoling the loss of lives, the prime minister sympathised with the bereaved families and prayed for strength to them to bear the loss. “Our nation stands with our courageous soldiers who face attacks from Indian backed terrorists,” the prime minister remarked.

Minister for Information and Broadcasting Senator Shibli Faraz strongly condemned the firing of terrorists on an FC post in Harnai Balochistan. In a tweet on social media platform, he paid tribute to the martyrs who sacrificed lives while performing their duties at the post. He prayed to Allah Almighty to elevate the ranks of martyrs in the heaven and grant courage to the bereaved families to bear the loss with fortitude. The cowardly activities of the terrorists could not lower the morale of the nation, he said, adding the terrorists will be punished for the ghastly act.