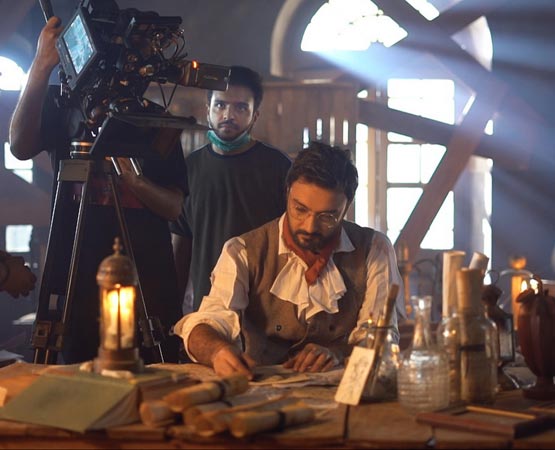 My generation has seen music in the form of 78 speed records with a song each on its either side, then EPs, LPs and then cassettes followed by CDs. The facility provided by internet and computers gradually saw these forms getting into background. Audio listening was necessitated to be complimented by videos to popularize a song. Thus music videos have recently seen some really quality work. Different artists from all genres have been releasing music videos which are diverse in nature, good quality and some of them match the standard of films you see in the cinema. Among this renaissance of music videos, the rock band Bayaan has become popular among others with their amazing story driven music videos which are directed by their frequent collaborator and director Hamza Bin Tahir.

Set in the aesthetics of a Victorian era, in an abandoned clock tower a man lives alone. He has created his own world as if he is stuck in time and trapped in a time capsule where he remembers his beloved wife who breathed her last in his hands during child birth. He touches her ornaments with tender hands, reads her letters on the war front, makes her numerous sketches and tries to enliven those sketches by inventing an ancient projector. He succeeds, the images start moving and metaphysics come into play. The gears of a giant clock that stopped ages ago start moving and a time tunnel is created. A flashback occurs and we come to know of the tragedy that has engulfed his entire life.

The metaphor of time through the giant clock and the moving gears is highlighted beautifully, as the wife holding the child appears and hands over the child to her husband. It really touches the heart and enhances the pathos of an already emotional song. Reality fades out and the fantasy takes over is the narrative to explain the video.

This video is beautifully conceived by the very talented young director Hamza Bin Tahir. This is his third music video with Bayaan, the others being Khel Tamasha and Hum Nadaan. His other works include music videos for the Pop star Shamoon Ismail and noticeable artists such as Talal Qureshi and Wooly and the Uke.

Set design and art direction has been done by art director Hashim Ali. He has created the world within the video with artistic ease. Cinematographer Awais Gohar’s work in the video is a treat to the eyes. The costume design by Kashaf Saleem and Shehrze Butt is extremely authentic to the era portrayed and the acting performances by Bayaan’s lead vocalist Asfar Hussain and model Aqsa Shah are emotional and commendable. The video thus embodies the story of everlasting love and immense grief of loss.

The future of music and music videos in Pakistan looks extremely promising and one can only wait in excitement what’s coming next from such talented artists.