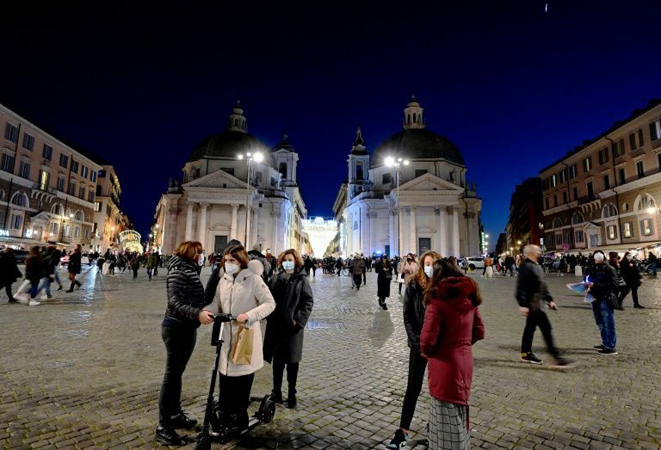 Millions of Italians braced for Christmas and New Year under tough new coronavirus restrictions announced Saturday as Europe battled a winter surge in infections and Switzerland became the latest country to approve a virus vaccine.

Europe has become the first region in the world to pass 500,000 deaths from Covid-19 since the pandemic broke out a year ago, killing more than 1.6 million worldwide and pitching the global economy into turmoil.

Among those testing positive this week for coronavirus was French President Emmanuel Macron, but his office said on Saturday his condition was stable and his examinations were giving reassuring results. Italy became the latest country to announce a new regime of restrictions until January 6 that included limits on people leaving their homes more than once a day, closing non-essential shops, bars and restaurants and curbs on regional travel.

“It’s right that they prohibit departures after 20 December if it means travelling in safety,” Claudia Patrone, a 33-year-old lawyer, told AFP as she got off a train in Milan. “I took the test before leaving, I stayed locked in my house, I didn’t see anyone. The measure is right if everyone respects the rules and guarantees safety.”

Europe — the epicentre of the pandemic earlier this year — is once again seeing growing cases with officials fearing an explosion in infections after the Christmas holidays as families gather. England’s chief medical officer Chris Whitty confirmed Saturday that a new coronavirus strain which surfaced in the country could spread faster and called for greater public vigilance to reduce transmission. A year after the pandemic first emerged in the Chinese city of Wuhan, the rapid rollout of vaccinations is now seen as the only effective way to end the pandemic and the economically devastating lockdowns used to halt its spread. Europe is expected to start a massive vaccination campaign after Christmas following the United States and Britain which have begun giving jabs with an approved Pfizer-BioNTech shot, one of several leading candidates.

Russia and China have also started giving out jabs with their own domestically produced vaccines.

Swiss regulators on Saturday give the green light to the Pfizer-BioNTech vaccine — the 16th country to do so and the first in continental Europe — with immunisation set to start within days.

“Those who are particularly vulnerable will have priority,” Health Minister Alain Berset said in a video tweet, namely the elderly and those with pre-existing conditions.

The United States on Friday authorised Moderna’s Covid-19 vaccine for emergency use, paving the way for millions of doses of a second jab to be shipped across the hardest-hit country in the world.

The United States is the first nation to authorise the two-dose regimen from Moderna, now the second vaccine to be deployed in a Western country after the one developed by Pfizer and BioNTech.

Millions of doses will start shipping out as early as this weekend from cold-storage sites outside Memphis and Louisville.

With the United States now registering more than 2,500 deaths a day from Covid-19, senior US officials including Vice President Mike Pence stepped up to receive early vaccinations on Friday.