Serbs take to their phones to raise millions for sick children 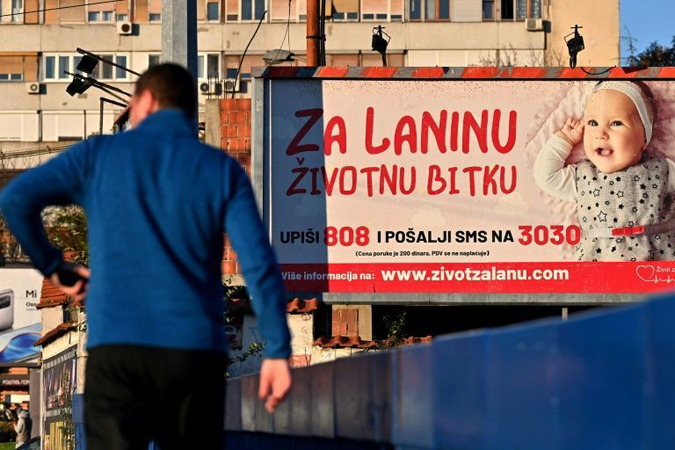 For Serbian mother Timea Gajodi, watching her eleven-month old baby grow is a nerve-wracking race against the clock to raise more than $2 million to treat his rare disease.

Her only way to find such a sum has been to put her baby’s face on a billboard in the type of fundraising campaign that has taken Serbia by storm in recent years, raising millions for medical treatments abroad.

Her son Oliver suffers from spinal muscular atrophy (SMA) which makes the muscles weaker and affects about one in 10,000 births. Without treatment, it results in death or the need for permanent ventilation by the age of two in 90 percent of cases.

“I never know what’s waiting for me when I go into the intensive care unit. He is currently stable, but it doesn’t mean he will be in half an hour,” Gajodi told AFP of her son, who is on a ventilator in a hospital in the northern city of Novi Sad.

“I just want to save his life,” the 28-year-old mother added.

Oliver has received treatment in Serbia which his mother said helped him “immensely”. But she has her hopes pinned on another drug, which he would have to go abroad to receive but, she believes, would “halt the disease’s progression altogether”. Known as the “world’s most expensive drug”, Zolgensma is a one-time gene therapy.

Pharmaceutical giant Novartis which produces it says the cost reflects the fact that gene therapy is a transformative new type of treatment and is 50 percent cheaper than current alternatives.

Gajodi’s fundraising campaign is powered by text messages, allowing people to donate 200 dinars each, around 1.7 euros (just over $2).

Oliver is one of five babies in Serbia suffering from SMA whose parents have turned to the public in this way since May.

Within half a year, the poor Balkan country — where average wages are under $600 (483 euros) a month — has raised some eight million euros to secure the treatment for four of the babies. More than 100,000 people have also signed an online petition demanding local municipalities divert the budget for this year’s coronavirus-plagued New Year’s Eve celebrations to helping the five infants.

Seven municipalities have done so, though not big cities like Belgrade and Novi Sad. Oliver is the last of the five babies and has so far received around 300,000 text donations, amounting to more than 150,000 euros.

According to local media, some donors have gone as far as selling their summer homes to help or auctioning off other assets online.

Earlier this month, half a million viewers logged on to watch Serbian pop star and 2007 Eurovision winner Marija Serifovic’s online fundraising concert for 14-month old Minja Matic, also suffering from SMA. “I will sing as long as I have a voice, until we collect the money for Minja,” Serifovic said.

Shortly after, the family announced it had met its target.

Billboards with children’s faces have become a regular sight across Serbia and even refugees have organised fundraising in four migrant reception centres. Not all the campaigns are for such costly treatments. Healthcare in Serbia is free but has limited reach when it comes to innovative or consistent treatments, humanitarian organisations say.