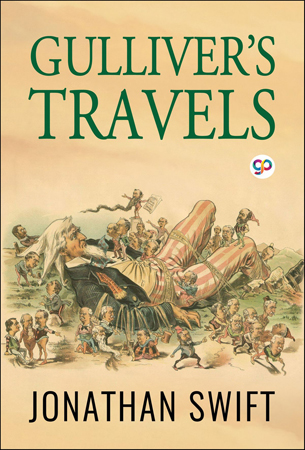 Jonathan Swift wrote and published Gulliver’s Travels in 1726. The story, an adventure fantasy novel, is about Gulliver who, while traveling by sea, reaches an unknown island of Lilliput. There he meets people who are not more than six inches in height.

The idea of relativism is nurtured and disseminated through Gulliver’s Travels. It shows that one’s perspective changes the reality for them, while the reality in a broader context remains the same for all. The Lilliputs were small people who looked at battle with the Blefuscudians from the perspective of their size. For Gulliver, however, defeating the navy of Blefuscudians was not a big task. He would walk in the sea and bring all of their ships to the shore by grabbing on to the anchors.

In addition to the concept of relativism, Jonathan Swift discusses the difference between physical and moral power. Gulliver’s huge size as compared to the Lilliputians makes him a mammoth being who can swipe away the land without breaking a sweat. However, Gulliver’s ability to respect the size and status of the Lilliput’s and to protect them from the invasion of Blefuscudians helps him achieve a moral objective that is more satisfying than using his sheer physical power. During his travels across various societies, Gulliver examines the political structure of the inhabitants. He makes a comparison with the English state. There are indeed some shortcomings in these societies. However, most of them do have certain admirable qualities that tend them to become ideal utopian societies. For instance, the King of Brobdingnagian does not like to use gunpowder and the King of Lilliput showed immense warmth when he and his people welcomed Gulliver to their land. Moreover, the peace maintained by reason by the Houyhnhnms is another example of a society where progress follows. However, certain actions do take place in such utopian societies. For instance, the Lilliput separate their children from their birth parents. This was advised by Plato in his text The Republic. This results in the children turning into unreasonable and immature adults.

While the people of Laputa, a flying island, is driven by scientific knowledge, they can produce useless inventions. Similarly, the Houyhnhnms have a rule of family planning but they give little value to marriage and love. Through this novel, Swift tries to explain that there is no perfect society that can be created. While mentioning the references of utopian societies through a fictional narrative, he suggests that dark implications might arise to haunt nations if utopian principles are applied.

Through Gulliver’s Travels, Swift also explains the significance of knowledge and knowing how to best use it. As Gulliver knows about the political structure and moral objectives of other societies, he remains open-minded. His thoughts give him the ability to look at the reality of societies and comprehend their good and bad aspects.

The importance of practical and abstract knowledge is also emphasized in the narrative of this novel. The Laputans, as an example, keep experimenting without making good use of their knowledge. The idea and concept of self-knowledge are also explained. It is Gulliver who learns from the actions of other societies and observes each society’s rules and predicaments arising from the social, political, and economic structure.

The concept of truth and deception is also explained by Swift in this novel. Gulliver comprehends the deception as conducted by various societies. For instance, the Lilliputians have a clandestine plot to starve Gulliver so he could die. Gulliver, in Brobdingnag, tries to keep his disasters a secret from Glumdalclitch, the giant nurse in Brobdingnag so that he could retain and assert his pride. Swift, through the journey of Gulliver, also reveals the ways societies perceive truth and deception. Fraud is the greatest crime for Lilliputians. In Houyhnhnms, Gulliver is amazed to see that the people do not even know what is meant by lying. The falsehood that they encounter is referred to as “the thing which is not.” Reading Gulliver’s Travel from the perspective of identifying social, economic and moral dilemmas will reveal the literary prowess with which Jonathan Swift wrote this novel nearly three centuries ago.