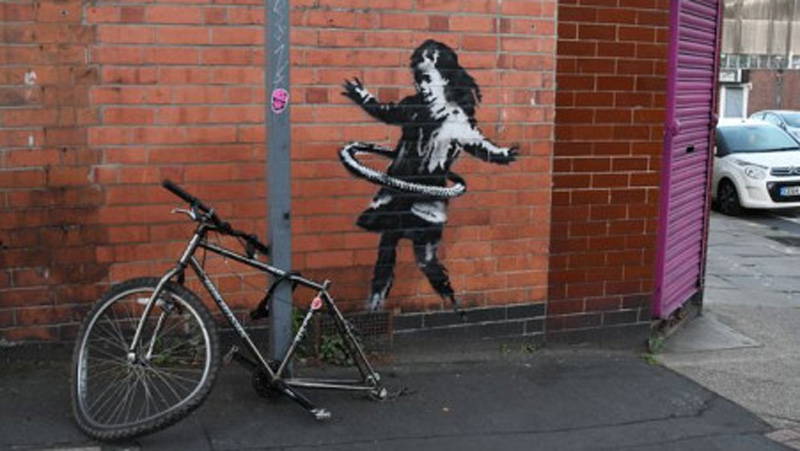 In October this year, a ‘suspected’ Banksy artwork had appeared in Nottingham in England. It was later confirmed to be the work of the anonymous street artist himself, when he had shared the picture on his official Instagram account, sending all his followers into a tizzy. “Amazing,” the artist had written on Instagram, with a picture of a young girl hula-hooping with the wheel of a bicycle, next to an actual bicycle that is missing a back wheel. While the graffiti is located on Ilkeston Road in Radford — just outside a beauty salon, believed to be a popular residential area for students — the bicycle has now vanished from its post. According to a BBC report, one visitor has described it to be “such a shame”. Tracy Jayne, a resident, found that the artwork had been ‘targeted’ when she went to visit it Sunday morning.

“The artwork records an important part of Nottingham’s history, Raleigh bikes. My late husband worked for Raleigh until it closed in 2002. He died at age 48 in 2017. It’s such a shame if someone has stolen the bike. It’s sheer disrespect and saddens me very much,” she was quoted as saying.

Earlier, the BBC had reported that after Banksy’s confirmation last month, people had begun to throng the place to have their photographs taken with the artwork, with as many as 30 people there at one point (a large crowd, given the pandemic situation), along with some police officers.

The report also mentioned that a Banksy expert by the name of Prof Paul Gough, from Arts University Bournemouth, was initially doubtful if it was the “real deal”, but later said he was “really pleased” the work was done by the artist.

“It is curious. The last four or five [of Banksy’s works] have all related to Covid or something in the news. This is much more whimsical and much more of the moment. It is someone enjoying themselves. Perhaps that is the message: ‘we are in difficult times, let’s try to make the most of it and get some fun out of something which is broken’. The hoop is holistic. The circle is positive and life-affirming. Even with a knackered bicycle, she is finding something she can play with,” he had told BBC.

Nottinghamshire Police and the Nottingham City Council, however, said the removal of the bike had not been reported to them.