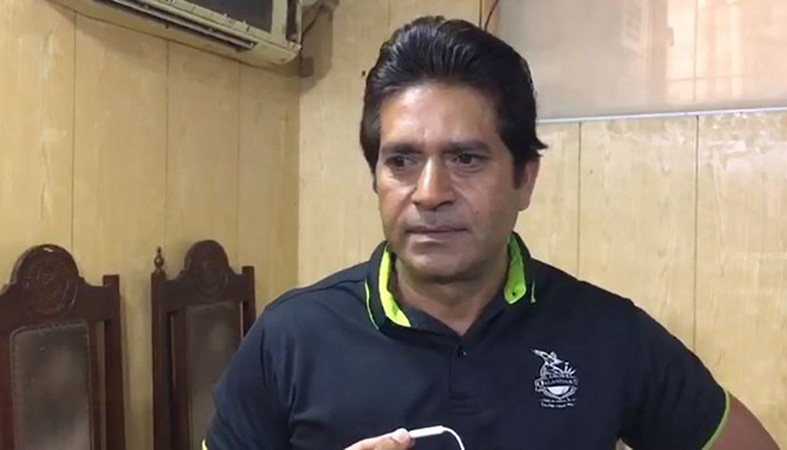 LAHORE: Aaqib Javed, the Lahore Qalandars coach, has said that his side “misread the pitch” after they lost the final against rivals Karachi Kings on Tuesday. After Lahore opted to bat, Fakhar Zaman and Tamim Iqbal added a steady 68-run opening stand off 61 balls, but the middle-order batsmen struggled to get going on a slow track, as they managed only 134 for 7. “We misread the pitch,” Javed said. “The idea was to bat first in a high-pressure game and set a big total to take an early advantage. But the standard of the pitch wasn’t great .. it was sticky, maybe it was the lack of heat in November or whatever but it didn’t go well. We realised the slowness of the pitch and that is why we sent Mohammad Hafeez ahead of Sohail Akhtar to keep the scoreboard rolling. But it just didn’t work either…everyone went for big shots. We had our chance and did start well with the control of winning the toss but sometimes losing a toss can be a blessing in disguise and I feel Karachi went away with the advantage. In such big games, we never wanted to chase and take extra pressure but us batting first on a pitch that turned out to be slow gave Karachi a clear idea as a testing case.”

Javed also pointed out that Babar Azam was the difference between the two teams. Azam made an unbeaten 63 –– his sixth successive fifty-plus score ––- to secure a chase of 135 despite a late wobble. “You got to give credit to Babar the way he played and took the game away from us and he was clearly one player who made the difference,” Javed said. “Had we got him earlier, Karachi Kings could have easily struggled chasing it (135).”

Javed, though, was pleased with how Lahore bounced back after having finished at the bottom of the table in the first four seasons. Despite the presence of high-profile players like Chris Gayle, AB de Villiers, and Brendon McCullum at different points, they couldn’t qualify for the playoffs in the first four seasons. However, this year, under Sohail Akhtar, who is uncapped at the international level, they made their maiden final. Shaheen Afridi finished as the highest wicket-taker in PSL 2020, with 17 strikes while Dilbar Hussain ended fourth on that list with 14 wickets. Four of the top-five run-getters this season were also from Lahore.

“Nobody really expected us to be in the final but we played brilliantly throughout and came long way,” Javed said. “We might have lost the final but our spirits are not defeated. Our philosophy is to develop players and give something back to the system. Over the years we developed our own players and other than Hafeez all our local players – Harris Rauf, Fakhar Zaman, Shaheen Afridi – grew with us over the years and established (themselves) because of Lahore Qalandars. “Overall, this season, playing final is a massive rise and we had an excellent season. It’s unfair to judge us just on the basis of the final alone but we have played some exciting cricket and challenged everyone. We have managed to change history from the last four years sitting at the bottom and finishing No.2 this season. I am proud of my team making the final and raising the bar big time…It’s really great to see Fakhar Zaman, Harris Rauf, Dilbar Hussain, Shaheen Afridi growing up and their individual performances are pushing their careers ahead. I know batsmen win games and bowlers win tournaments and we had such great balance this season and had a great combination but unfortunately missed out just one mistake of misjudging the pitch.”