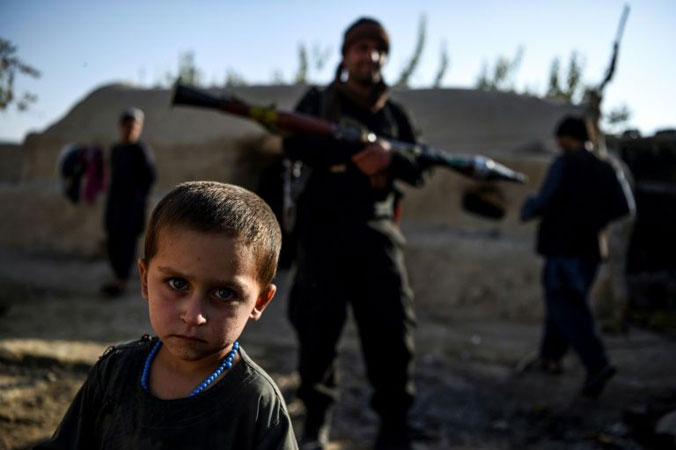 The dry and dusty village of Aziz Abad sits on the frontline of Afghanistan’s war and is currently under government control — but only just.

Every night, 20-year-old paramilitary policeman Zainullah and his colleagues must seek refuge in filthy trenches at their battered outpost on the edge of the village while insurgents target them at an increasingly fierce tempo.

“The Taliban do not want peace,” said Zainullah, who like many Afghans only goes by one name.

The village is located in Maiwand district — the scene of a notorious British military defeat in the 19th century — in Kandahar province, where the insurgents have kept control in some rural areas despite 19 years of war.

The insurgents are close to Zainullah’s makeshift base, where barbed wire fencing and shredded sandbags offer scant protection.

A walkie-talkie crackles as a police officer listens in on Taliban transmissions — he says the militants are discussing the unrecognised vehicles AFP is travelling in.

After months of US cajoling and concessions, the Taliban finally agreed to start peace talks with the Afghan government in September, but the Islamist hardliners have only stepped up attacks in the weeks since.

“Lots of our colleagues have been killed and many others wounded,” Zainullah said.

In late September, Taliban fighters crossed the frontline, reaching a nearby village called Deh Qubat before being pushed back.

“The Taliban were hiding behind walls, in houses and in the mosque. They were everywhere,” recalled Atta Jan, a 28-year-old farmer, who was having breakfast when militants stormed his street in Deh Qubat, a 35-minute drive from Aziz Abad.

Sardar, a farmer in Aziz Abad, said his mosque no longer offers evening prayers because of the volatile security situation.

Walls in his village have been destroyed by fighting and the roads are all but abandoned.

Separated by the war, some of Sardar’s family live under the Taliban, divided by a no man’s land of desert.

“All our families are split… for the past 18 years I have not seen their happiness or sorrow, I have not attended their funerals,” he said.

The peace talks came after the Taliban and Washington signed a deal in February, with the US agreeing to withdraw all foreign forces in exchange for security guarantees and a Taliban promise to start talks.

“Since the talks began, the fighting has intensified every day,” said Ahmad Ikhlas, a police commander with hearing damage from a recent Taliban truck bombing.

“One of our colleagues died in the explosion a couple of weeks ago. After the blast, I became deaf.”

Such scenes are playing out across Afghanistan, with the Taliban harassing Afghan army and police bases and launching large-scale attacks, including one on Lashkar Gah, the capital of neighbouring Helmand province.

The US Special Inspector General for Afghanistan Reconstruction (SIGAR) said in a report Thursday that overall attacks against Afghan forces and civilians were up 50 percent in the three months to the end of September, compared to the previous quarter.

And where Afghan forces around Aziz Abad could once rely on US military support, now they must increasingly fend for themselves.

President Donald Trump has said he wants US troops out of Afghanistan as quickly as possible, and the Pentagon has seemed reluctant to strike the Taliban, publicly acknowledging only a handful of strikes since February.

So for many residents in Maiwand, which has seen constant violence since the Taliban’s ouster following the US-led invasion of 2001, peace seems unimaginable.

“The Taliban throw dust in the eyes of Americans — they make some deal with them but do not want peace,” said Khalil, a 26-year-old police officer who helped defend Deh Qubat.

He said he has relatives fighting on both sides of the conflict, and many who have died because of it.

Progress seen in other parts of the country since 2001 have hardly materialised in this unstable region. The first school for girls in Aziz Abad is still under construction.

Many of the people AFP spoke to see no end to Taliban influence, and the insurgent group has made clear it expects to be back in power before long.

Fourteen-year-old Malalai, who is already engaged, said she had missed her window to get an education.

“If I start now, I will be too old when I graduate,” she said.

“Every night, there is fighting. My heart says peace will not come,” Mohibullah said.