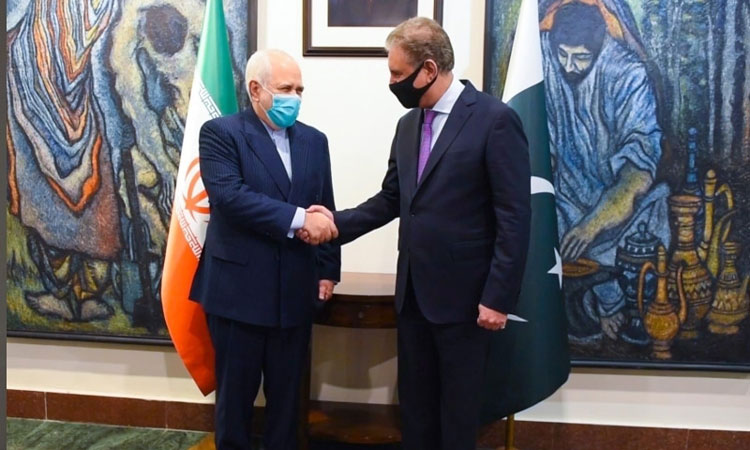 Pakistan and Iran on Wednesday agreed to make joint efforts for peace and stability in the region, including Afghanistan, Radio Pakistan reported.

The understanding was reached during a meeting in Islamabad between Foreign Minister Shah Mahmood Qureshi and his Iranian counterpart Javad Zarif, who is currently visiting the country for talks on regional issues in addition to reviewing the bilateral ties.

During the meeting, Qureshi said Pakistan and Iran can benefit from regional and other important forums for promoting cooperation in bilateral trade, investment, security and other areas of mutual interest. He said durable peace in Afghanistan is imperative for peace and stability in the region. He said the Afghan leadership has a unique opportunity in the form of intra-Afghan dialogue and urged them to not let it go.

The two foreign ministers also expressed concern over rising Islamophobia in some European countries and made it clear that a blasphemous attitude in the guise of freedom of expression is not acceptable at all.

During the meeting, the ministers exchanged views on bilateral relations, promoting bilateral cooperation in diverse fields and the coronavirus pandemic. They also discussed better border management, promotion of mutual contacts and provision of better facilities to Zaireen.

Expressing grief and sorrow over Covid-19 deaths in Iran, Qureshi appreciated the Iranian government’s efforts to control spread of the pandemic. He also apprised his Iranian counterpart of Indian atrocities and gross human rights violations in the occupied valley Kashmir.

In a tweet after the meeting, Foreign Minister Qureshi said that he looks forward to further growth of close bilateral cooperation across a diversity of fields between Iran and Pakistan.

Meanwhile, Prime Minister Imran Khan stressed over the need for enhanced bilateral trade and economic relations between Pakistan and Iran. The premier said this during his meeting with Iranian Foreign Minister Dr Javad Zarif.

The prime minister extended condolences over the loss of precious lives in Iran due to Covid-19 pandemic. Sharing Pakistan’s experience, the prime minister said that the smart lockdown strategy and other measures taken by his government had led to significant containment of the pandemic in Pakistan. He also emphasized the need for enhanced bilateral cooperation with special emphasis on bilateral trade and economic relations. He also underscored the need to work closely for promoting peace, security and development in the region. Highlighting Pakistan’s efforts towards facilitating peace and stability in Afghanistan, the prime minister said that there was no military solution to the Afghan conflict. He reaffirmed Pakistan’s support for Afghan-led and Afghan-owned peace process and hoped that this historic opportunity would be seized by all Afghan parties to secure a political settlement. He added that peace in Afghanistan would be beneficial for the entire region as it would create new opportunities for trade and economic cooperation as well as regional connectivity.

The army chief told the foreign minister that enhanced Pak-Iran cooperation will have a positive impact on regional peace and stability, as per a statement released by the Inter-Service Public Relations. The Iranian diplomat appreciated Pakistan’s positive role for regional stability, especially the Afghan peace process, and pledged to keep working for better relations between the two brotherly countries.

Zarif arrived in Islamabad on Tuesday on a two-day visit which the foreign ministry said would help in deepening bilateral cooperation and developing a better understanding of each other’s perspective on regional issues. He was accompanied by senior officials, including Iran’s special envoy for Afghanistan Mohammad Ibrahim Taheriyan. He was also scheduled to meet Prime Minister Imran Khan, Speaker of National Assembly Asad Qaiser and Army Chief Gen Qamar Bajwa during his stay in Islamabad. It is Zarif’s fourth visit to Pakistan over the last two-and-a-half-years.