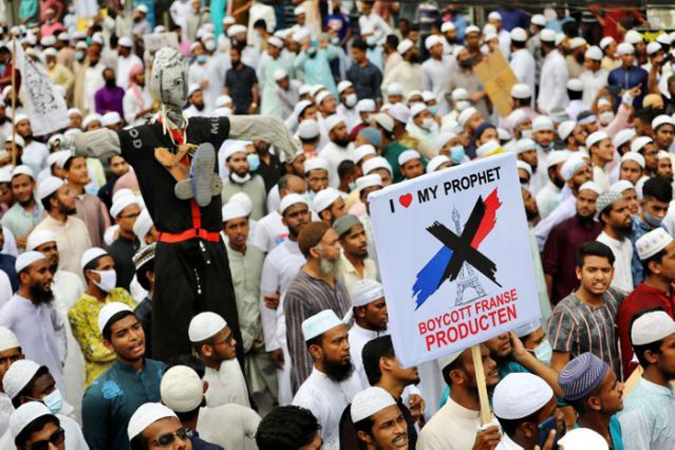 Bangladesh’s biggest Islamist group on Monday told the government to cut diplomatic ties with France within 24 hours, as police stopped thousands of its supporters from marching towards the French embassy. Tens of thousands of Muslims across Bangladesh, the world’s third-biggest Muslim country with more than 160 million people, have been protesting against remarks by French President Emmanuel Macron in a row about cartoons. There have been similar protests in other mainly Muslim countries such as Indonesia over the dispute, which follows a knife attack outside a French school last month when a man of Chechen origin beheaded a teacher who had shown pupils the cartoons in a lesson on freedom of speech. France has allowed displays of the cartoons, which are considered blasphemous by Muslims. On Monday in Bangladesh’s capital Dhaka, thousands of protesters demanded a boycott of French products and an end to the country’s ties with Paris. “We are giving an ultimatum to the government to end diplomatic ties with France within 24 hours,” said Junayed Babunagari, head of Hefazat-e-Islam.