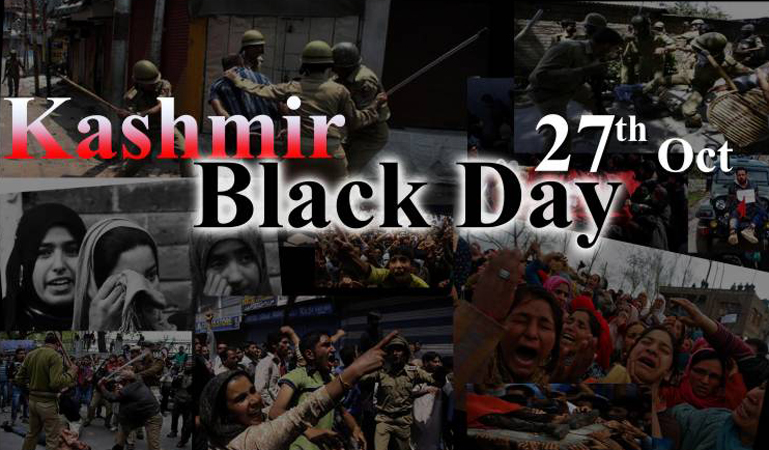 Kashmiris on both sides of the Line of Control and the world over observed October 27 as Black Day to convey to the world that India has occupied their motherland illegally and against their aspirations.

Indian Army had invaded the state of Jammu and Kashmir on this day in 1947, in an attempt to subjugate the Kashmiri people.

Since then, despite unabated Indian atrocities, New Delhi is unable to break the will of the brave people of Illegally Occupied Jammu and Kashmir, who are struggling for their right to self-determination.

According to Kashmir Media Service, protest marches, rallies and seminars were held in Srinagar and other parts of the occupied territory to condemn the Indian invasion as well as revocation of the special status of Kashmir by Modi-led fascist regime.

The day was marked by complete shutdown in the territory, call for which were given by All Parties Hurriyat Conference, Hurriyat forum led by Mirwaiz Umar Farooq, Democratic Freedom Party and other pro-freedom organizations. Protest rallies and demonstrations were also held at all districts and tehsil headquarters of Azad Jammu and Kashmir to mark the Black Day. In the state capital Muzaffarabad, a big protest demonstration was held at Central Press Club under the auspices of Jammu and Kashmir Liberation Cell.

Meanwhile, the Indian Chargé d’ Affaires was summoned to the Ministry of Foreign Affairs to register Pakistan’s strong protest on occasion of the Kashmir Black Day in condemnation of the continued human rights violations being perpetrated by Indian occupation forces against innocent Kashmiri people in Indian Illegally Occupied Jammu & Kashmir (IIOJK).

It was demanded that the Indian Government give the Kashmiris their legitimate right to self-determination in accordance with the relevant United Nations Security Council (UNSC) Resolutions which call for a free and impartial plebiscite under UN auspices.

It was further demanded that India rescind its illegal and unilateral actions of 5 August 2019, immediately lift its military siege in IIOJK, and reverse its illegal measures to change the demographic structure of the occupied territory.

Also, Prime Minister Imran Khan on Tuesday said Pakistan was ready to hold peace talks with India provided the latter ended military siege in Jammu and Kashmir and agreed for a plebiscite in the Valley as per the United Nations Security Council (UNSC) resolutions. “To India, I say that we are ready, but you have to end military siege in Kashmir and give Kashmiris their right to self-determination,” the prime minister said in his special televised video message in connection with Kashmir Black Day.

Imran Khan recalled that even in his maiden address to nation after assuming office, he had talked about peace with India and extended offer that if India would take one step towards peace, Pakistan would reciprocate with two.

“Pakistan still believes that peace is the only way for the prosperous future of the people of sub-continent, however it cannot ignore India’s ongoing reign of terror in Indian Illegally Occupied Jammu and Kashmir (IIOJK),” he said.

“The painful saga of Kashmiris for seven decades continued until India added another chapter to their misery on August 5, 2019, with 0.9 million occupational forces putting eight million Kashmiris under siege,” he said. He mentioned that the “world’s largest open prison” not only confined the local Kashmiris, but also put their leadership behind bars.

“Presently, Kashmiris are living an unfortunate moment of their lives as neither they are citizens of India nor they have been given their right to self-determination as per the UNSC resolutions,” he said. 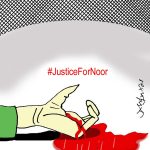