Rins battles past Marquez to seal victory at Aragon GP 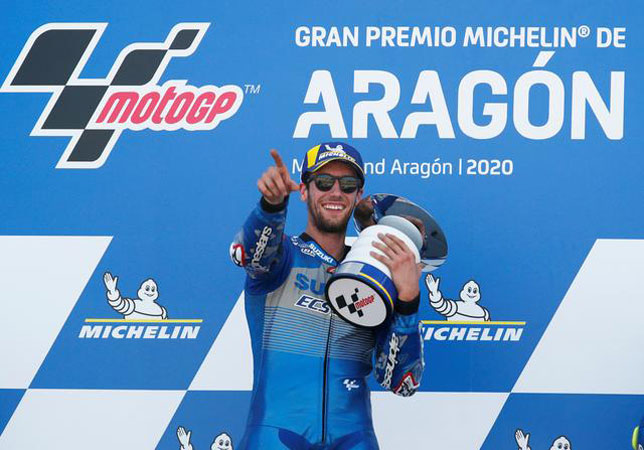 ALCANIZ: Suzuki’s Alex Rins held off a spirited challenge from Repsol Honda rookie Alex Marquez to claim his first victory of the season at the Aragon Grand Prix in Spain on Sunday. Rins’ team mate Joan Mir finished third to take a six-point lead at the top of the championship ahead of Fabio Quartararo, who started at the top of the grid but finished a disappointing 18th for Petronas Yamaha. Starting 10th on the grid, Rins stormed out of the blocks to move up to fourth on the opening lap before moving past Yamaha’s early pace-setter Maverick Vinales to take the lead on lap eight. Marquez, fresh off his maiden MotoGP podium finish in France last weekend, climbed up nine spots and tested Rins in the final five laps, but the Suzuki rider held his nerve to seal victory on home soil. “I had to make sure I didn’t break the rear tyre and also manage the distance from Marquez in the end,” said Rins, who moved up to seventh in the championship. “It’s amazing, this victory is for all the fans who visit from all the towns around here.” Mir’s pace dropped dramatically in the final lap but he did enough to finish ahead of Vinales, who came fourth to move up to 12 points behind the championship leader.

Former Moto 3 champion Mir is yet to win a race this season but has racked up five podiums, becoming Suzuki’s first premier class championship leader since Kenny Roberts Jr won the title in 2000. The race at MotorLand Aragon circuit was the first without a premier class champion on the grid since 1999, with Valentino Rossi self-isolating after testing positive for COVID-19 and reigning champion Marc Marquez out with a long-term injury. Rins becomes the eighth different winner in 10 races so far this season, with Quartararo winning three, but the Frenchman had a weekend to forget after he failed to collect any points following two high speed crashes in open practice sessions over the last two days. Next weekend’s Teruel Grand Prix will also be held in Aragon.