Spain: A paradise of weed for Europe’s drug traffickers 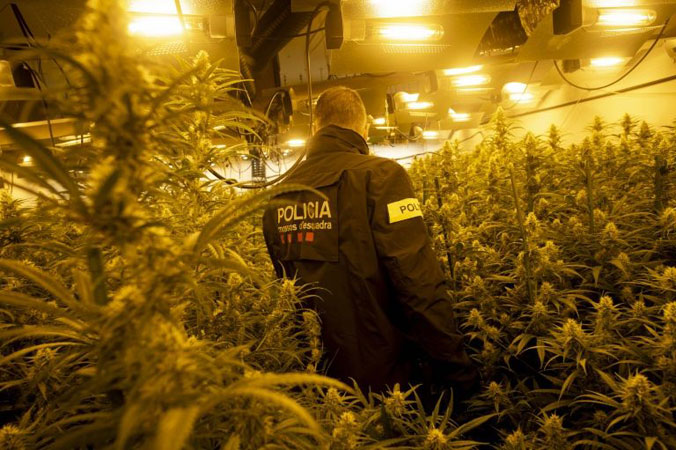 It is the dead of night when police storm a house near Barcelona where hundreds of cannabis plants are growing in the basement under the glare of a sea of heat lamps.

After decades as the gateway for Moroccan hashish to enter Europe, Spain is now seeing illegal plantations multiply as the country morphs into a cannabis production hub, attracting criminal gangs from across the continent.

Spain alone accounted for a third of all such operations across the EU, according to the 2019 European Drugs Report.

And the highest number of seizures was in Catalonia, the wealthy northeastern region that borders France.

The phenomenon began a decade ago when groups involved in pushing Moroccan hashish along Spain’s Mediterranean coast, who already had a good distribution network and contacts in place, “realised they could earn more by selling marijuana”.

With some 25 million consumers, cannabis is the drug of choice in Europe, bringing in some 11.6 billion euros ($13.6 billion) last year, estimates by EU’s policing agency Europol show.

A forest of marijuana

Catalan police carried out three raids in the first week of October, one of which targeted two properties in San Esteban Sasroviras near Barcelona, where they seized 1,500 plants and arrested four people.

Ahead of the raid, there was a tense silence as agents wearing bullet-proof vests and carrying assault weapons advanced towards the housing estate in an operation witnessed by AFP.

Here many properties empty since the financial crisis of 2008 have been either rented or taken over by criminal groups who set up indoor plantations, which if well maintained can produce four times the harvest of an outdoor crop.

The operation goes without a hitch, with the Albanian “gardeners” giving themselves up without any resistance. In a huge basement illuminated by glaring yellow lights is a forest of green plants, each about a metre (3.3 feet) high

Despite the whirring of dozens of fans, there is a jungle-like humidity and an overpowering smell of cannabis.

According to the officer in charge of the raid, who did not want to give his name, with four crops a year, the gang could expect to earn between 200,000 and 400,000 euros on the European market.

Although a gram of marijuana goes for 5.0 euros in Spain, it costs around three times as much in the rest of Europe, and even six times that amount in some Nordic countries — offering a juicy markup for savvy importers.

“These groups set up major production facilities (indoor and outdoor) with the intent of supplying the demands of their countries of origin.”

Criminal groups from Britain, Sweden, Serbia, Poland and France, among others, had moved into the market, lured by the low production costs and the “grey areas” of Spain’s legal framework, Chacon said.

Although the sale and public consumption of cannabis is illegal in Spain, growing it for personal use is allowed as is the sale of seeds and other propagation materials

This has led to the creation of cannabis clubs, informal groups of consumers who produce and distribute cannabis for the use of its registered members.

Although Catalonia has moved to legalise marijuana, it is currently being appealed.

To a certain extent, this has desensitised debate around cannabis, allowing drug traffickers “to get their claws into all levels of society”, corrupting everyone from police officers to politicians, Chacon says.

But behind the widespread popularity of marijuana, those involved in its production have also been linked to gang violence, illegal weapons trading and even human trafficking with immigrants enslaved on certain plantations.

“There appears to be diversification in organised crime groups’ involvement in the cannabis market in the EU, with the competition leading to higher levels of intergroup violence,” Europol’s Oorth told AFP.

In Catalonia, where levels of gang-related violence remain low, there have been three murders linked to the cannabis trade in the past month.

“Marijuana-related murders are starting to be a regular thing,” admits Chacon, who fears that such violence will increase.

For now, “everyone is earning a lot of money without too much competition between gangs,” but one day that will change, he warns, predicting tensions will rise and eventually trigger “a more serious battle over territory”.