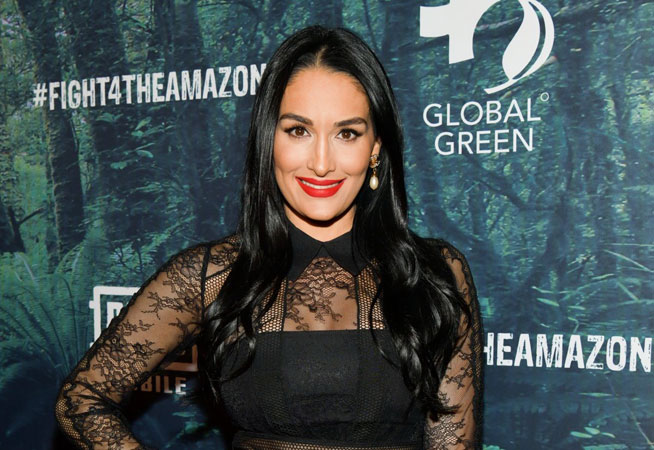 Preaching positivity. Nikki Bella took to Instagram last week to share her friend Hiram Garcia’s newly published photography book, but before she knew it, the post was receiving comments like “BOYCOTT ALL BELLA PRODUCTS !!!!!” and “Oh noo! TRUMP 2020.”

Now, she’s using The Bellas Podcast to speak out about what exactly went down.

“We know as authors…how much work you put in to making your first book; to any book you have,” Nikki began. “And the minute you get your first book published and it hit shelves, how proud you are. You’re just so excited; it’s a huge accomplishment. So when I got his in the mail, I just remember that feeling when we dropped Incomparable.”

As a result, Nikki wanted to recommend the book to her followers with what she described as “a love post.”

“So I put it up, right? I tended to Matteo. He went back down for a nap,” she continued. “And then I looked at social media and all of a sudden I was like, ‘What the f–k?’ I’m like, how did this turn into a political debate?”

As it turns out, the angry commenters weren’t necessarily attacking the author or the book, but its subject: Dwayne “The Rock” Johnson.

“I’m not even thinking—of course, the book is about The Rock; photography about The Rock—he just endorsed Joe Biden,” Nikki added. “First of all, that never crossed my mind. Not once.”

She continued, “It sucks that you can support someone—support a friend and their amazing accomplishment—and how it turns into negativity and you get this backlash and it turns into something so political.”

Nikki revealed her first instinct was to delete the post because she’s always believed “there’s no winning talking about politics, unfortunately.”

However, the photo remained. And she has a message to everyone who left hateful comments: “Nikki Bella’s account, this is all about positivity, love and light. I embrace everyone’s beliefs because I was raised to believe—and I learned on my own—that everyone is gonna have different opinions and beliefs.”

“That’s what makes the world go round,” she added. “We’re all never going to think the same.”

Brie Bella weighed in on what she described as the “s–t show” comments section, calling for people to show “compassion, unity and love” to everyone—even those they disagree with.

“I loved how The Rock was like ‘Hey, I never talk politics, but I feel I have to,'” Brie explained. “Good for him for feeling something and voicing it. Like, who cares?”

She continued, “So many of us publicly have been proclaiming, ‘Use your voice. Be real. Be you. Be raw.’ And now we’re getting close to the elections, and now it’s like, don’t say how you feel, you might piss someone off.”

The Total Bellas stars went on to urge their podcast listeners to “step it up on social media with the love,” and most importantly, “listen” to others.

Nikki and Brie also gave updates on their 9-week-old babies!