* But if you're at ease with low door frames, uneven staircases and the odd visit from winged creatures of the night, there is a strong chance you'll be completely smitten with the place — like I am 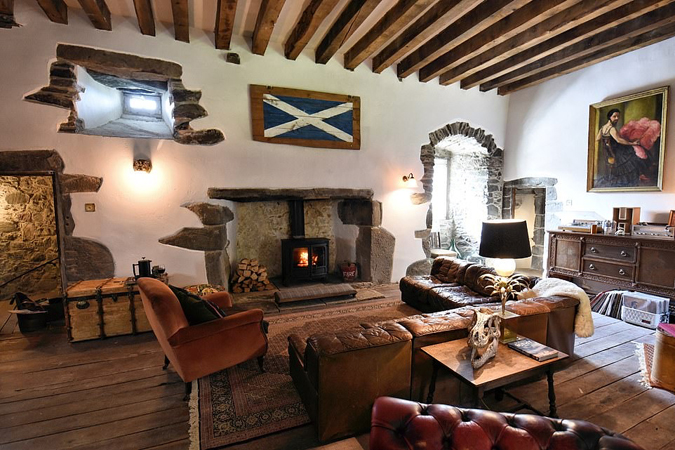 A stay at Kilmartin Castle comes with a few warnings. Check-in and you’ll need to mind your head, watch your step and keep an eye out for the occasional bat – they like it in there.

But if you’re at ease with low door frames, uneven staircases and the odd visit from winged creatures of the night, there is a strong chance you’ll be completely smitten with the place – like I am.

Special? This 16th-century castle – set in one of Scotland’s most historically fascinating areas – is extraordinary.

Plus, it has laid-back, welcoming, bonhomie-infused owners – Stef Burgon and husband Simon Hunt – who you’ll be chatting to like old friends within minutes.

The fact that Kilmartin Castle, which was built in 1550 during the legendary reign of Mary Queen of Scots, is now a one-of-a-kind place to stay is all their doing.

Stef and Simon bought the property for £330,000 in 2014 when they lived and worked in Dubai and rented it to holidaymakers remotely.

At the end of 2018, they moved in and spent seven months renovating it with the help of architects, skilled restorers and builders, and a dollop of determination.

I was extremely excited at the prospect of checking out the handiwork.

Of course, as with any self-respecting escape to a rural Scottish lodge, the journey is half the fun.

Ours – me, my partner and three-year-old daughter – began with an Avanti Pendolino from London Euston to Glasgow along the West Coast Main Line. This serves up a mouthwatering hors d’oeuvre to a holiday in the wind-ravaged wilds of Scotland by skirting the Lake District and the Yorkshire Dales and offering up eye-popping views of the North Pennines, too.

From Glasgow, it was a memorably thrilling hire-car drive along roller coaster roads that dipped and swooped past lochs Lomond, Gilp and Fyne – and between immense mountains.

Kilmartin Castle lies just north of Loch Gilp in the enchanting Kilmartin Glen, nestled in the hamlet of Kilmartin.

Within six miles of the village, over 350 prehistoric and historic monuments have been found, including Dunadd Fort, where Scottish kings of old were anointed.

The hill it once stood on – a big lump in an otherwise flat expanse of fields – makes for an arresting sight on the approach to Kilmartin from the south.

Tantalisingly, you can’t see the castle from the road – at least not clearly. Instead, it springs forth like a cut-out in a pop-up book as you enter a gap in a wall of trees on a gravel driveway beyond a cluster of cottages.

Stef, 41, and Simon, 38, haven’t altered the building’s fantasy kingdom looks and structure – the walls are as chunky as they were over 500 years ago, the fairy-tale turrets remain in place and some of the windows sport original defensive metal bar shields.

It’s still a home that could withstand a attack.

But inside, it’s a beguiling blend of ‘visible history’, as Stef and Simon put it, cosiness and eclectic quirk.

Medieval authenticity abounds, yet you’ll be as comfortable here as in a five-star hotel.

After Stef had given us a quick tour of the castle vegetable patch, explained that we might hear the neighbour practising his bagpipes, told us that bats got in from time to time and showed us the key to the front door – which is almost as big as my toddler – it was time to see our lodgings.

We ascended uneven steps up to the living room and then up a spiral staircase to our bedroom – one of four, called Speel – which was too narrow and steep to negotiate with our huge suitcase.

Speel, it turns out, is an old Scottish word for ‘the climb’. The reward for the ascent? An utterly wonderful room.

A beautifully upholstered antique double bed sits beneath a wall with semi-exposed stonework and a vaulted ceiling.

Upcycled vintage travel trunks form one of the side tables, there’s a hipster floor lamp with an exposed retro bulb and in the adjacent tower, accessed via a huge step, a bathroom with a rain shower in the middle of the ceiling and a beautiful earthenware sink.

This turret ensuite even has a heated floor, as do the other turret bathrooms and the entire ground floor.

I loved the details.

Shampoo, soap and conditioner are stored in little refillable painted ceramic pots by artist Claire Henry and there was ground coffee presented in a paper bag, clipped together with the handle of a metal scoop.

And a jet-black designer kettle.

But the piece de resistance is the gigantic handmade William Holland standalone copper bathtub at the end of the bed.

We wondered if creaky, ancient plumbing would render the shower and bath redundant, but then learned that Kilmartin Castle has a £40,000 state-of-the-art mini pumping station designed to provide instant high-pressure hot water to every pipe in every room.

We put it to the test and weren’t disappointed.

In the evening we sipped wine on the living room’s comfy L-shaped 70s’-style modular sofa and let our surroundings sink in.

My eyes flitted from the wood-burning stove in the humongous fireplace to the record player to the Chesterfield Armchair, then to the eccentric paintings and up to the wooden-beamed ceiling – and I concluded even at this early juncture that a return visit would need to be scheduled.

This feeling was reinforced at dinner time as we ate tasty soup cooked by one of the guests in the farmhouse-style kitchen and the next day as our hosts served us big pots of proper coffee and top-end home-made porridge in the breakfast room at a lordly wooden table.

Outside a storm was raging, but we couldn’t hear a thing. We were in our own little medieval wonderland.

Stef and Simon – I absolutely love what you’ve done with the place.