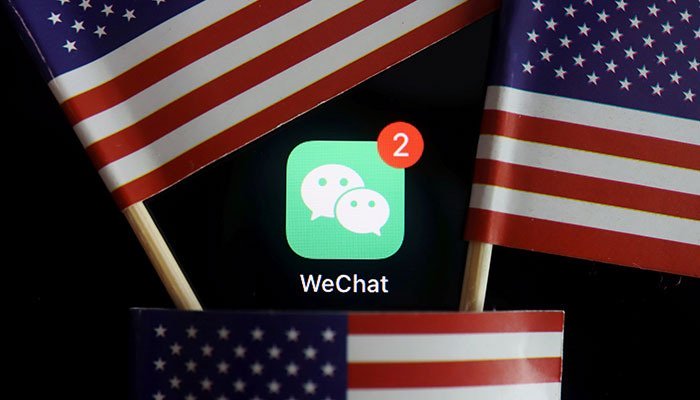 A US judge halted the Trump administration’s ban on downloads of the Chinese-owned app WeChat early on Sunday, hours before it was due to take effect in an ongoing technology battle between Washington and Beijing.

The Trump administration had ordered a ban on downloads of the messaging platform WeChat as well as a hugely popular video-sharing app TikTok, both owned by Chinese companies. Both bans have now been suspended.

A California court ruling said it granted a “motion for a nationwide injunction against the implementation” of the government order on WeChat, with the judge citing concerns over free speech.

The order would have slowed WeChat down and made it unusable in the United States for video chats with family and friends, according to experts.

Owned by technology giant TenCent, WeChat has around 19 million active daily users in the United States.

When contacted by AFP, TenCent declined to comment on the ruling.

The ruling “is a short-term relief for the plaintiffs, who wanted to be sure that the app was not shut down tonight,” said Carl Tobias, a law professor at the University of Richmond.

As President Donald Trump seeks a breakthrough with voters to win a second term in the November 3 election, he has increasingly put national security and his aggressive stance toward China at the center of his campaign.

The president said Saturday that he had approved a deal allowing Silicon Valley giant Oracle to become a data partner for TikTok to avert a shutdown of that app.

The deal, announced by the companies, includes Walmart as a commercial partner and would create a new US company named TikTok Global.

TikTok — owned by China´s ByteDance — confirmed the Oracle agreement, which came as companies raced against the Sunday deadline.

The US Department of Commerce on Saturday announced it was postponing the ban on TikTok downloads until September 27, due to “recent positive developments.”

Commerce Secretary Wilbur Ross on Friday accused China of using the two apps “to threaten the national security, foreign policy, and the economy of the US.”

WeChat is “mostly used by Chinese visiting or working here or by Chinese-Americans staying in touch with their relatives,” said William Reinsch of the Center for Strategic and International Studies in Washington.

That includes several hundred thousand Chinese students in the United States, who use it for daily online conversations.

Trump has often claimed, without providing evidence, that TikTok and WeChat are collecting user data for Beijing.

In early August, he gave ByteDance until September 20 to hand over TikTok´s US operations to an American company.

China on Saturday condemned the US “bullying,” saying it violated international trade norms and that there was no evidence of any security threat.

China also launched its long-expected “unreliable entities list,” seen as a weapon for Beijing to retaliate against the United States.

The Trump administration has used its own “entity list” to shut Chinese telecom giant Huawei out of the US market, in addition to the recent moves against TikTok and WeChat.

US officials have described Washington´s crackdown as essential to safeguard against potential Chinese espionage through the platforms.

According to the US Treasury, the TikTok deal still needs to be finalized by the involved companies and approved by a federal national security committee.