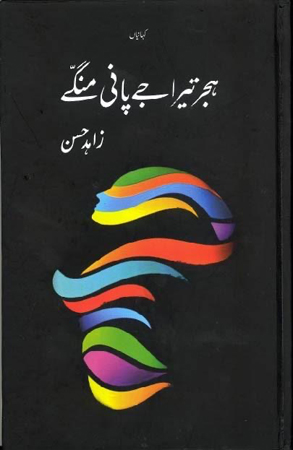 I have known Zahid Hassan for almost three decades and have seen him growing in stature as a novelist and a short story writer.

Initially he was a poet also. He is also a researcher. Presently in his employment with Lahore University of Management sciences (LUMS) where he conducts research. His designation is Research Associate, Gurmani Markaz-e-Zuban-o-Adab. He also gives lectures on Punjabi language and literature as well inn creative writing inn Punjabi. Last year he organized a three day Punjabi literary conference on history, and culture in LUMS on February 22 to 24, 2019. The organizers were the most renowned faculty of the office of Dean, Mushtaq Ahmad Gurmani School of Humanities and Social Sciences (MGSHSS), and the Gurmani Centre for Languages and Literature. Zahid Hassan has received Waris Shah Award on his three classic novels from Academy of Letters, and has won Dhahan International Award, Canada for his novel ‘Tassi Dharti’.

Zahid Hassan was born inn Lyallpur on April 01, 1969. Zahid has a rich exposure to the language and culture of ‘Sandal Bar’ which remains the major ingredient of his works. He moved to Lahore in 1985 and finished high school the same year. His previous assignments have been related to publications; In-charge Publications, Pakistan Literary and Sounds, Lahore (1991-1993), Research Scholar & Editor Temahi, Punjabi Adab, Pakistan Punjabi Board, Lahore (1994-2004), Field Officer & In-charge Publications, Democratic Commission for Human Development, Lahore (2004-2016).

Naeem Sindhu reports in local English daily that Zahid Hassan’s research on the life and miseries of marginalized communities served as raw material for his fiction writing, especially the novel ‘Ghaleecha Unan Wali’ (carpet weaver), which deals with the tough life of carpet weavers. It was recognized by the Pakistan Academy of Letters in 2013. Another novel ‘Qissa-e-Ashiqa’, printed in 2014 was also acknowledged by the said academy in 2015. Initially a poet, he was advised by senior writer Jameel Ahmad Paul to write fiction. He published his short stories in his literary magazine ‘Svair’.

We shall now talk about Zahid Hassan’s award winning novel. Dhahan Award is controlled by Sikh Community in Canada and since past few years they have started considering books in Shahmukhi from Pakistan also and generally give second prize to Pakistani authors, the first goes to some senior Sikh author in Gurmukhi. Nevertheless it is a matter of pride for Pakistani authors.

The above titled award winning novel was based on Zahid Hassan’s own experiences unlike his previous works which were based on his observations only. Zahid stated “Based on the stories passed down by my forefathers, the novel starts from 1840. It is about the struggle of ‘Jaangli’ tribes who worked hard to prepare the arid lands of ‘Sandal Bar’ for cultivation; they would keep migrating in search of fertile lands and water. (According to Wikipedia it is a region between the rivers Chenab and Ravi in Punjab, Pakistan. It is located in the southern part of Rachna Doab. It spreads over almost 40 miles (64 km) in width (west to east) and 80 miles (130 km) in length (north to south). “Bar”, in the local language, means a forested area where there are no resources for cultivation, like water. This Bar is named after Saandal, thought to be the grandfather of the legendary Punjabi hero, Dulla Bhatti. Almost all the area of this bar used to be part Jhang District, but nowadays it is divided between the districts of Faisalabad, Jhang and Toba Tek Singh. The Sandal Bar is known for the Sammi and Jhumar form of music and dance. It was ruled by Mehr Humayun Bharwana for a long period. This area was not under the British rule, but was a Princely State).

Zahid Hassan was born inn Lyallpur on April 1, 1969. Zahid has a rich exposure to the language and culture of ‘Sandal Bar’ which remains the major ingredient of his works. He moved to Lahore in 1985 and finished high school the same year

The more powerful tribes with weapons and manpower would invade their land and take away their produce, livestock and even their women. During the British rule, these tribes remained in conflict with the colonizers as they were punished by the British through military assaults and by depriving them of irrigation resources needed for farming and raising livestock”. Social fabric of this area is deeply studied by Zahid Hassan from 1940 onwards and land grabbing in the post-partition era. Naturally the story comprises love, hate, struggle, betrayals among the characters with ‘Jaangli’ dialect and folklore exhibiting the culture in the disturbing times. Critics observe that the pessimistic approach, shallow socio-political analysis and unimpressive ending lacking any attempt at closure, announcing a sequel indicate the author’s lack of craft. He identifies himself with the left-aligned progressive writers and on the other hand stays close to the rightists who are instrumental in promoting him as a writer. This ambition to appease all quarters might help him win awards and opportunities to establish himself as a writer but it could also result in the lamentable confusions, reflecting in his writings. Will this novel about a specific ethnic community becomes part of its culture, will it survive as an archival artifact or is it simply an entry to a one-horse award race?” This question needs to be answered.

Mahmud Awan states in a local daily on December 18, 2016 that this novel is a story of three generations of bar natives and Zahid being a son of that soil narrates it with full colloquial details and historical insights. The novel starts in the first half of nineteenth century’s pre-colonial Punjab and stretches to the time of partition and a few years after. As Dr. Saeed Bhutta so rightly quotes Gabriel Garcia Marquez in the foreword to Tassi Dharti, these are the stories of deceit and deception faced by our ancestors over centuries enforced by foreign invaders and local power mongers. It is an intertwined tale of struggle and survival of natives who are bound to remain homeless in their very own land. They are uprooted after every hard settlement and never find peace. There is no main protagonist in the novel as such. It is a play between people and place where a bar (Sandal bar) appears as the main character around which the whole story evolves. It is a tale of proud, self-assured resilient people who were officially designated as ‘Jaanglis’ by the British colonialists. This very ‘title’ is still found in the Revenue records and Punjab Colonies Reports of that era. The word Jaangli is still ‘in use’ and repeatedly propagated as a derogatory and demeaning term by the self-colonized Pakistani elite. Tassi Dharti is a grievous tribute to all of us Jaanglis and our heritage who have not been shaken by these belittling onslaughts. Mahmud Awan criticizes “Protagonists of Tassi Dharti belonged to the same poor and landless sections of the peasantry who were the first casualty of every internal and external invasion that Hassan has captured so well. However, he has attempted to make his novel too historical, especially in the middle with inorganic, ambitious and forced entries. His raw attempt to link all historical Punjabi events of that time including Ahmad Khan Kharral’s resistance, Jallianwala Bagh massacre and Bhagat Singh’s movement make the plot saggy and loose, indicative of lazy editing”.

Before proceeding ahead we shall list the other awards captured by Zahid, apart from those by his novel ‘Tassi Dharti’.

The above titled novel seems Punjabi version of Zahid Hassan’s Urdu novel ‘Ishq Kei Maare Hue’ says critic Saleem Suhail. The only thing is that in the Punjabi novel Zahid looks different, a man totally stung by the pains of the society at large. He has painted his pictures on the canvass and added characters and their pains and sorrows, as though they are his own. The problem he discusses is one from the rural setup and the other from the urban but the essence is that those who live in the setups are full of problems, the nature being different, but the pains seem to be rubbing shoulders with each other. When villagers migrate to urban areas, they are faced with dilemma of another sort. Zahid’s selection of the names of characters such as Ahmad, Paro, Rangi, Ch. Manik, Jamal, Naveed, Zareena, Bibo Kumhar, Rajj, Lakhi, Mirasi, Raheem, Taji, Aslam Dewat Rahim, expose the characters sown in and brought up by this soil. He indicates as to how many Paros are devastated by how many Ahmads. This novel was published in much awaited installments in Svair International.

This novel’s specialty is that it is not written by an onlooker but by a person who has lived among the characters in the plot. He raises the voice against child and women labour and expose the workings of many NGOs who obtain funds under this sacred cause but their performance is poor. He gives an instance of a character Paro (the author is fascinated by this name, it appeared in another of Zahid’s novel) who is married to a Lambardar who cuts her into pieces but Paro’s mother does not have guts to speak against the Lamardar in the court; such is her mental disposition due to poverty and in debt. The life, issues, problems of carpet weaving women is exposed fully by Zahid in his novel; a unique theme.

The protagonist Zahoor narrates his love story with Sara, the latter having gone to America for research. They come across each other, fall in love and this love becomes an integral part of their lives, despite their divergent backgrounds. Zahoor experiences of untold love away from the suffocation of his desire inn the environment he belonged to. Each novelist provides a different shade to a love story. Zahid Hassan has added a new color to his love story. This novel has been written with retrospect technique. Flashbacks are written at points where an event affects the story. For example when Zahoor meets a French traveller on his journey to Swat and he shares his love story with him who on return passes on the information about Zahoor’s marriage to Sara. Two other characters creep in; Sara’s friend Jenny and Zahoor’s friend Rehman. Author informs of these events as on May 01, 1996. The tumultuous times, the sittings at Pak Tea Hose and the purchasing of books on the footpath are described in detail. Internet comes to rescue. Sara complains of his marriage and says that she would also think on those terms now. Zahoor’s unfulfilled love with related happenings has been dealt with in intricate manner by Zahid Hassan.

Zahid Hassan started his career as a Punjabi poet. His book ‘Galian’ (lanes) comprised Punjabi poems. His second book titled ‘Rut Asaan Di Hani’ was published by Sanjh Publications, Lahore. His third book of poems is under process. His interest then shifted to fiction writing. This interest continues.

Zahid Hassam feels that due to political and other vested interests Punjabi language has not been made official language or being taught in Primary and Middle Levels. Since past seventy years it has not been possible to implement this noble cause that provides a Punjabi his identity. Punjabi since has been introduced in institutions such as LUMS can be a torch bearer for the government to implement Punjabi in offices and in curricula at school level. Ironically many Punjabi magazines in their editorials oppose this idea on the basis that Punjabi shall become a part of government if implemented at government level. Punjab as a province provides input to other provinces culturally. Its music and heritage excels, so this is an opportune moment when Punjabi language shall get its due.