US Open all about location on Winged Foot and on calendar 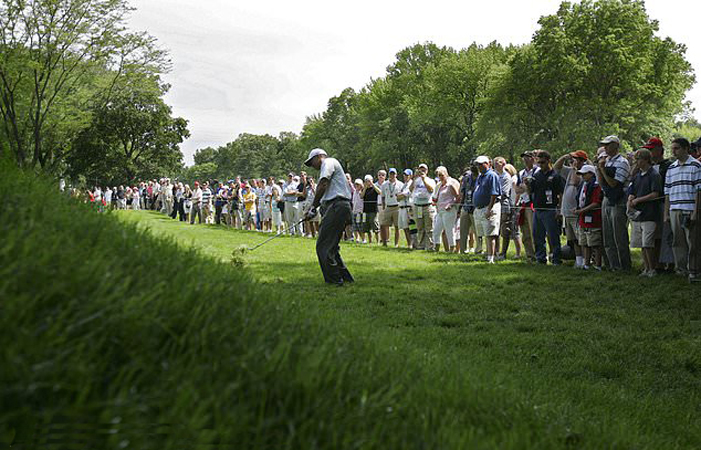 Dustin Johnson capped off a torrid stretch of golf at just the right time. He had at least a share of the 54-hole lead in four straight tournaments, turned two of them into victories, returned to No. 1 in the world and ended the PGA Tour season by winning the FedEx Cup.

It was worthy of a big celebration and time to relax, except there was no time for that.

The U.S. Open was right around the corner.

“Get back to grinding,” said Johnson, who was expected at Winged Foot six days later to start preparing for what figures to be the toughest test of the year.

The U.S. Open is all about location, and the history of Winged Foot says plenty.

Of the 750 players in the five previous U.S. Opens at Winged Foot, only two of them completed 72 holes under par. That was in 1984, when Fuzzy Zoeller and Greg Norman each finished at 4-under 276 – Curtis Strange was five shots behind – and Zoeller beat him in an 18-hole playoff the next day.

The 1974 U.S. Open became known as the “Massacre at Winged Foot” when Hale Irwin won at 7-over par. Geoff Ogilvy won the most recent U.S. Open on the A.W. Tillinghast design at 5-over par, and most remarkable is that hardly anyone complained.

This year, however, location has just as much to do with the calendar.

Evidence of a year gone amok from the COVID-19 pandemic is a U.S. Open moving to September. Golf was shut down on March 13 and didn´t resume until one week before the U.S. Open was supposed to be played. Instead, the USGA found a suitable date on Sept. 17-20 in Mamaroneck, New York, about 5 miles from one of the early hot spots of the coronavirus.

And for players, there is no letting up.

Players like Johnson, Jon Rahm and Justin Thomas – the top three players in the world going into the 120th U.S. Open – will be playing for the sixth time in eight weeks, all big events, all against the strongest fields.

“This is weird for every one of us,” said Tiger Woods, who at least was allowed two weeks off from not making it to the Tour Championship.

The last time the U.S. Open was played in September, it turned out to be one of the most significant moments in American golf. Francis Ouimet, a 20-year-old amateur, beat British greats Harry Vardon and Ted Ray in a playoff and put golf on the front of U.S. newspapers for the first time.

What does this U.S. Open have in store?

Mickelson has the most scar tissue of the 14 players who were at Winged Foot for the 2006 U.S. Open.

He had a one-shot lead playing the final hole when he tried to hit 3-iron over a tree, struck the tree, caught a plugged lie in the bunker and made double bogey to lose by one. He wasn´t alone in his misfortunes. Colin Montgomerie made double bogey from the fairway and was runner-up, while Jim Furyk missed a 5-foot par putt to also finish one behind.

Mickelson stands out because of his six silver medals as runner-up, when a gold medal is what he needs to complete the career Grand Slam. Now he´s 50, still good enough that William Hill said one bettor has placed $45,000 on Lefty to win at 75-1 odds, a potential payout of $3,375,000.

Johnson comes in as the betting favorite based on recent form and overwhelming talent. His only major was four years ago in the U.S. Open at Oakmont, reputed to be among the toughest courses in America.

“Those are the courses that I like,” Johnson said, already brimming with confidence. “The harder the better. All my wins come on the hardest golf courses I´ve ever played.”

That he has only one major stands out. But for all his mishaps, Johnson is in the mix more often than most at the U.S. Open.

He had a three-shot lead in 2010 at Pebble Beach until that disappeared in one hole and he shot 82. He was a 12-foot eagle putt away from winning at Chambers Bay in 2015 until he three-putted on the bare green and finished one shot behind Jordan Spieth. And then two years ago at Shinnecock Hills, he had a four-shot lead going into the weekend until he shot 77 on Saturday to fall into a four-way tie for the lead and Brooks Koepka wound up winning.

Koepka won´t be around to extend his amazing run – victories at Erin Hills in 2017 and Shinnecock Hills in 2018, and pushing Gary Woodland to the finish line at Pebble Beach last year before finishing second. Koepka´s left knee hasn´t been right all year, and he finally decided to take enough time off until it heals. That led to him withdrawing last week.

Having to move the U.S. Open from Father´s Day to the start of the NFL season was bad enough. The greater effect of the pandemic on the U.S. Open was having to eliminate qualifying, a staple of this major for nearly a century. The USGA is proud to say every year that roughly half the field had to go through qualifying. Because of more than 100 courses involved in two stages of qualifying, those were scrapped in favor of an all-exempt field.

It still has 13 amateurs, and plenty of non-PGA Tour players, typical of any U.S. Open. The field has been reduced from 156 to 144 because of the September date that provides about three fewer hours of daylight.

But the shutdown came one month after the USGA rolled out a new brand campaign called, “From Many, One.” The idea was that more than 9,000 players enter the U.S. Open, and after local qualifying around the country, sectional qualifying around the world, a 36-hole cut, enormous pressure on Sunday, one champion emerges. The last two elements are still in place. Still to be determined is what kind of test the winner will have to pass. Woods and Justin Thomas took a scouting trip to Winged Foot a month ago and while it was soft that day, Woods said it was ready for a U.S. Open. Rahm went two weeks ago and it didn´t take long to figure out what he would be facing.