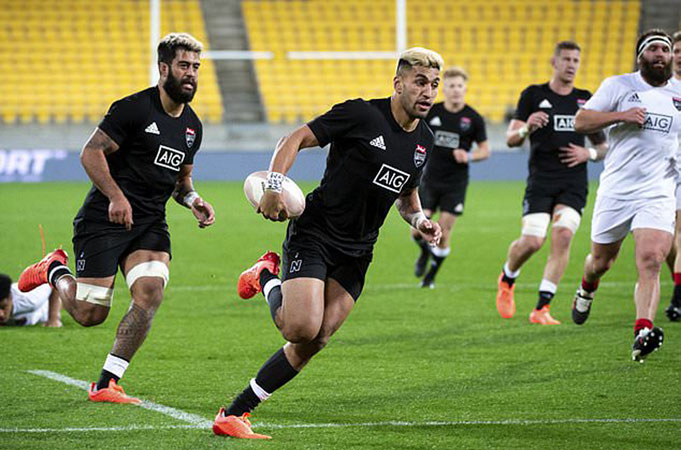 Mo´unga had a hand in several tries and winger Will Jordan scored after the full-time siren to give the South Island a 38-35 win over Barrett´s North Island in a match between teams made up almost entirely of All Blacks.

The match, which saw 10 tries and seven lead changes, served as a final chance for new All Blacks head coach Ian Foster to assess form before he names his first New Zealand squad on Sunday ahead of an uncertain international season.

Mo´unga has been the form No. 10 in domestic rugby, steering the Crusaders to the Super Rugby Aotearoa title. Barrett played much of the New Zealand Super Rugby at fullback after transferring from the Wellington-based Hurricanes to the Auckland-based Blues and his form remains a beat behind Mo´unga´s.

Other standouts were Jordan, who came off the bench to score twice,uncapped Blues backrower Hoskins Sotutu, North fullback Damian McKenzie, veteran lock Sam Whitelock who captained the South and the North´s Rieko Ioane who has change to center after making his name for the All Blacks as a winger.

The match was first scheduled to be played last weekend but was postponed by a week and moved from Auckland to Wellington because a COVID-19 outbreak in New Zealand´s largest city meant large sports events could not take place. Wellington, along with the rest of New Zealand, is subject to less stringent restrictions, though the match had to be played without fans.

The North vs. South match was a major fixture in New Zealand rugby during the amateur era, first contested in 1897 and then for almost a century afterwards. But it was shouldered aside with the advent of professionalism, lost in a packed calendar though it was revived once before, in 2012.

The winner received the Loving Cup until 1932 when the trophy was lost after being awarded to the North Island. After 88 years, the Cup was rediscovered in a basement at Auckland´s Eden Park in time to be presented to this year´s winner.

In its heyday the North-South held a place as a surrogate or additional All Blacks trial and this year´s revived fixture, which was almost a match between All Blacks teams, was given that billing. It´s unlikely Foster needed the match to make any final or borderline selection calls but the game may have given him reassurance.

Foster had 10 weeks of the Super Rugby Aotearoa competition, in which New Zealand´s five Super Rugby teams played each other twice, to see the same players in action and likely will have finalized his 35-man squad of the season well before Saturday.

The match may be remembered as a prelude to an international season that doesn´t take place. The four-nation Rugby Championship is unlikely to go ahead because of logistics around quarantine and a recent outbreak of COVID-10 among the Argentina team.

A Bledisloe Cup series between New Zealand and Australia is also yet to be confirmed because of coronavirus outbreaks in both countries.