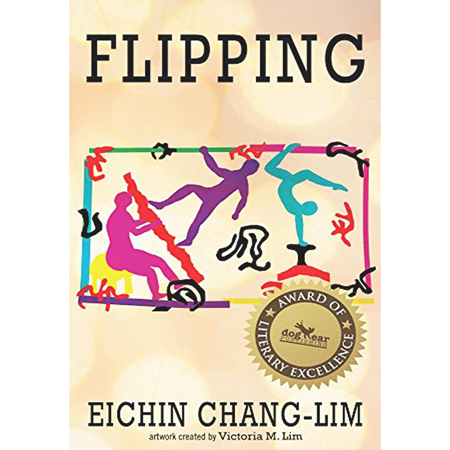 Flipping is a South Korean novel by Eichin Chan-Lim published at Dog Ear Publishing. The story is divided into Three Parts, whereas Part 1 is mainly concerned with Jonsun with whom the story begins and part 2 is about the life of Elliana who has to undergo tragedies even when she has a happy prosperous life because of her children. Part three of the story is for the next generation who begin to get hold of their life while the parents begin to give way to them. Flipping the lives of the two generations, one for the worst and one for the better is the very theme of the South Korean novel ‘Flipping’ by Eichin Chan-Lim that hit the market in 2015. The story begins in the school of Korea and ends up in USA and includes two generations. JonSun, a promising boy with a very poor back ground faces the social criticism of his class fellows and the awkward moments. One of the awkward moments came when he wanted to kick a football. The writer describes that “the soccer ball finally flew in his direction, and he gave it a mighty kick. It was a powerful one! However, the force taken to do that also tore his old, two-sizes-too-small, thin pants right at the seam between the buttocks. His faded, graying-blue underwear revealed. Girls behind him laughed out loud”. He has to come out with struggle at school. He aggravates this situation when he falls in love with a girl SuAnn, with a rich background. The ridicule on him increases manyfold at the social level. For example, one his friends gives very adverse remarks when he says that he has found love, “Love?” sniffed Mr. Chen scornfully. “Love is as flimsy as soap bubbles on the water. It’s lovely. It’s pleasant. But it can’t support a marriage”.

But love gives him courage and he migrates to US to tell the world that he too makes his fortune. Facing difficulties in the beginning he, enters in the business of renovating the old buildings and selling them on profit and really makes a big fortune. Just as the renovation neared completion, they got wonderful news: SuAnn was pregnant! JonSun was ecstatic. For the first time since he graduated from college, he felt like a genuine success. He had provided his wife with a beautiful house that they owned, and now they were going to start a family! What more could he ask?

His success ensures a far better life for his wife and son as compared to the life they had in Korea. The story further unfolds and takes into the life of the migrants in general. The son of JonSun, Wynson falls in love with a Christa, a blind and deaf girl and earns a huge load of sadness for himself

His success ensures a far better life for his wife and son as compared to the life they had in Korea. The story further unfolds and takes into the life of the migrants in general. The son of JonSun, Wynson falls in love with a Christa, a blind and deaf girl and earns a huge load of sadness for himself. Christa herself is the daughter of rich parents accompanied by Jadelynn who is the daughter of another Korean migrant but has been adopted by Christa’s mother. Jadelynn is good girl but Christa even after being a perfect athlete falls a victim to the nostalgia of the deafness and blindness feelings and fails to recognize the love of the Wynson.

“This is so unfair! she mentally screamed. Wasn’t it enough that I have to be deaf? Now I’m going to be blind too? Why? Why me? What did I do wrong?”

The story has two very different strains: one that of Love and other that of migration and its challenge. In case of the first generation of JonSun love proves to be a straight matter and he succeeds in life as well as love and leads a happy prosperous life and ultimately his wife dies of the disease and he is left alone. His son Wynson falls in love and feels much desperate. So, the migration in one case has resulted in success for one generation but in another case, it has resulted in sadness. For example, “After prom, Christa had made it painfully obvious that she didn’t want anything to do with him, and once school ended, she hadn’t responded to any of his many texts or emails or Skypes. Eventually he quit trying. He’d heard through the grapevine that she hadn’t qualified for the Olympics trial, but, fed up with feeling like a pathetic stalker, he’d unfriended her on social media. However, he could never truly put her out of his mind. If only she were here with me now”.

Moreover, the cultural clash and divide prevents the father of Wynson to accept a Korean girl for his boy with a non-Korean background but fate seals it even further when Christa becomes not only deaf but also blind and the boy just keeps on finding peace in the spiritual presence of his mom. Even money could not make him happy. The simple love story is based on teenage love but the proceeds of love remain different in both cases. When the boy is poor love succeeds and makes the boy also succeed and make his fortune but when money is not the problem, the love fails because of the role of fate and chance. So, it means that the novel is the story of the common people who aspire to do big things in their lives and migrating to USA makes them successful but the same USA makes them fail in love as well. At this level this story becomes the story of the common human beings who make efforts but nature intervenes and love is turned into sadness not for mistrust, faithless ness or the wrong choices, not even because of the cultural clash and differences of class but only because nature has its own way. The story is resembling more with the tragedies of Shakespeare and Hardy where, circumstances and chance becomes a major determiner for making the lives of the people happy or sad.