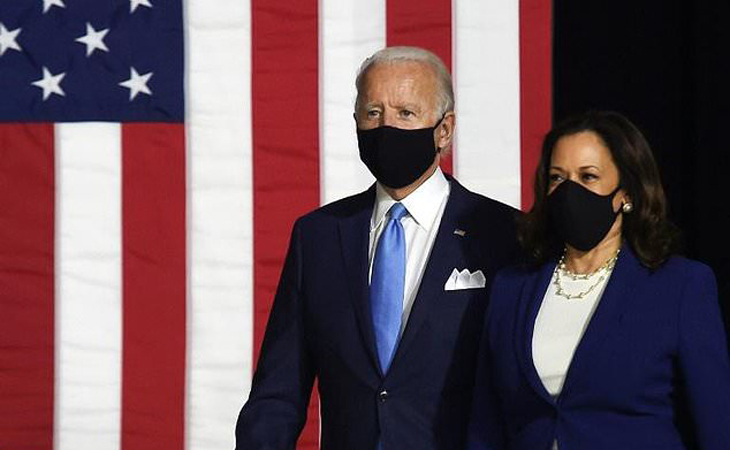 “Tell me who you walk with, and I’ll tell you who you are,” proclaimed the first bilingual Spanish and English campaign ad by Democrat Joe Biden after he announced his running mate would be Senator Kamala Harris.

“An ally, a champion of the Latino community,” the ad said of the vice presidential hopeful.

A woman of color and daughter of immigrants, Harris can whip up enthusiasm among Latino voters, many of whom are turned off President Donald Trump.

For the first time, people with roots in Latin America will be the largest minority bloc in the US presidential election, with an estimated 32 million eligible voters, or 13.3 percent of the total, according to the Pew Institute.

In 2018 elections, when Trump’s Republican Party lost control of the House of Representatives, 69 percent of Latino votes went to Democrats.

Christine Marie Sierra, professor emeritus of political science at the University of New Mexico, told AFP that Latino voters were already inclined to back the Democrats, but Harris “may change the enthusiasm level, which then translates into higher voting rates, which then translates to possible wins in a close election.”

A recent poll showed that 59 percent of Latino voters in key battleground states were fired up about Harris’s selection as running mate, and 52 percent said her name on the ticket made them more likely to vote for 77-year-old former vice president Biden.

“Harris’s selection is an opportunity for Biden to capitalize on the Latino vote and mobilize young Latino voters,” said Anais Lopez, an analyst for Latino Decisions, which conducted the poll.

Harris, the daughter of a Jamaican father and Indian mother, would be the first woman and the first person of color to occupy the office of vice president if Biden wins on November 3.

Trump, under fire for his chaotic response to the coronavirus pandemic and the economic crash it caused, has returned to his anti-immigration crusade to pump up his base and push for another term.

“He doesn’t see immigrants as humans,” said Juan Escalante, a Venezuela activist covered by DACA, a program set up by former president Barack Obama to regularize the immigration status of hundreds of thousands of people who had arrived in the US illegally as children.

Trump has tried to scrap the program. Biden has undergone close scrutiny of his role overseeing the Obama administration’s deportation of almost three million undocumented migrants, which has led some critics to call him the “deporter in chief.”

“His record on immigration may not be the best, but today he is showing people that he is trying to put forward real solutions and solve past errors,” said Escalante, a political scientist.

In the Democratic primaries, progressive Bernie Sanders garnered more support from Latinos, in part because he proposed ending deportations and getting rid of the much-feared immigration police, ICE.

Biden, a moderate, did not go that far, but he has promised to protect DACA, push legislation to legalize the status of some 11 million undocumented migrants and reverse harsh asylum rules set up by Trump, which limit intake and obliges applicants to wait in Mexico while their claims are processed.

“Stopping the Trump agenda would be enough to get the Latino vote for Biden, Harris,” Sierra said.

In 2016, Trump won 30 percent of Latino voters, mostly Cuban Americans, who tend to vote Republican, but also military veterans and Central American evangelicals. Many of these groups are concentrated in the key battleground state of Florida.

Christian Ulvert, a Democratic Party strategist in Miami, said his party was nevertheless winning over younger Cuban Americans, as well as Colombian immigrants and the large numbers of Puerto Ricans who moved to Florida after their home island was devastated by Hurricane Maria in 2017.

Ulvert said that with many voters undecided, his party was planning an “aggressive” campaign and that Harris is “a great asset.” Her record as a senator “fighting for access to health care, fighting for immigration reform and justice for our immigrant families, carries a lot of weight with Hispanic voters,” he said.

The issue of Venezuela looms large among some Latino voters in Florida, and Trump has dubbed the country’s Socialist leader Nicolas Maduro a dictator.