The idea of Feminism comes to mind when one wants to emphasise the implicit equality in the opportunity of both genders that constitute humanity. 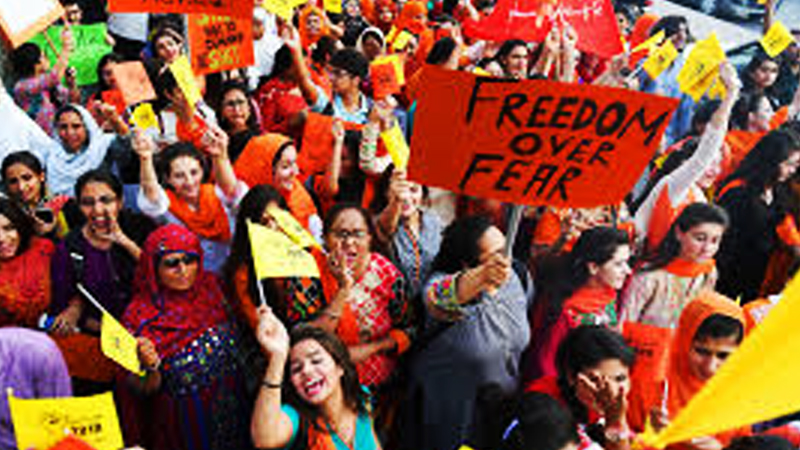 In an economic system, the family is the nucleus of growth and production. Whenever this fundamental nucleus is threatened by internal or external forces, the entire economic system is likely to collapse.

Feminism is the belief in social, economic, and political equality of the sexes. Several centuries ago, Islam had made both genders spiritually equal, though historically, both had their respective roles to perform to raise their families. Although the movement for equality between the sexes originated in the West, it soon became worldwide.

With the creation of Pakistan, Begum Ra’na Liaqat Ali Khan created the All Pakistan Women’s Association (APWA) for the uplift of poor and destitute women of Pakistan in 1949. It empowered the women by providing them skills to make them economically independent. Mohtarma Fatima Jinnah also contributed to women by instituting Girl Guide and overseeing the rehabilitation of women. Begum G.A.Khan also worked for their health and their empowerment.

The feminist movement (more commonly known as the women’s movement, or simply feminism) refers to a series of political campaigns for reforms on issues such as domestic violence, maternity leave, equal pay, women’s suffrage, prevention of sexual harassment, and sexual violence, guaranteeing girls’ right to education, all of which fall under the label of Feminism.

Shockingly, Pakistan ranks third-worst – 151 out of 153 – on the Gender Parity Index of the World Economic Forum (WEF). Our women literacy is so low that more than five million primary-school-age girls don’t go to school. According to UNICEF, 21 per cent of Pakistani girls are married before turning 18. According to the latest Human Rights Commission of Pakistan report, over 1,000 young girls from other religious communities are forcibly converted to Islam every year. The I.M.F in its 13th bailout programme for Pakistan has underlined that bridging the gender gap could boost Pakistan’s GDP by 30 per cent.

This Women activist movement under the banner of ‘The Aurat March’, started a practical programme of taking out rallies on March 8 which is International Women’s Day – in all big cities of Pakistan. The first procession was taken out in 2018 displaying placards and slogans challenging the patriarchal status quo and underlining the various excesses against women’s rights.

The Islamist group mainly consisting of JUP(F) and some clerics of Lal Masjid threatened to attack the marchers to stop the march and assaulted the rally with bricks and sticks but thousands across Pakistan braved the threats and rallied for women’s rights. Earlier the right wing groups went to the high court to ban the ‘Aurat March’ but their prayer was rejected. Despite this, they resorted to violence to gain political mileage out of their protest against the March.

Seen in its historical perspective the first great success for women’s rights came through the 1961 Muslim Family Laws Ordinance covering marriage and divorce, the most important socio-legal reforms for the repressed section of women in Pakistan. This is still widely regarded as the first empowerment of women. The second phase of women’s empowerment was initiated with the Islamisation programme of military dictator Ziaul Haq. He introduced Hadood Ordinance and the punishments of whipping, amputation, and stoning to death. The changes which the dictator brought in the existing law of evidence about rape and fornication etc made the conviction of the offender nearly impossible. The feminist movement in Pakistan highly opposed their implementation which they believed were based on an archaic understanding of Islam and asked instead for liberal modernist interpretation. After much controversy and criticism, parts of the law were considerably revised by the 2006 Women’s Protection Bill.

Present-day feminism is more pluralistic and accepting in terms of gender, sexuality, race, class and religion than its past editions

After Zia, Benazir Bhutto became the first female Prime minister. During her tenure, some feminist legislative attempts were made, such as the founding of all-women police stations, and the appointment of female judges for the first time. But many anti-feminist laws of General Zia era remained.

The feminist movement in Pakistan entered a crucial period after 2008 with the advent of private media channels and social media. The movement gained momentum as women were increasingly able to share their ideas and beliefs.

Aurat Marches (Women Marches) are now held in numerous cities over the country. It has raised its vocal opposition of religious extremism and conservative religious values. This patriarchal construct of religion has generated criticism and counter-movements which led to the creation of two types of feminism which exist in the country.

Liberal feminism in Pakistan is most prominent in leftist circles mostly supported by leftist parties like the PPP. It is inspired by liberal values of freedom, liberty and human rights. It also implicitly supports the concept of LGBT ( lesbian, gay, bisexual, and transgender), which is abhorred in most countries of the West. In western culture, sexual freedoms have become a matter of human right and sex has become a matter of enjoyment, losing its sanctity as an instrument of procreation.

The more traditionalist form of feminism in Pakistan is based on those rights which are sanctioned by Islam, and which are particularly given in Sura Nisa of the Holy Quran, for which it is also attributed as Nisaism.

Aurat March 2019 also marks a major shift from the previous articulations of feminism in Pakistan. It inaugurated a new phase in feminism, qualitatively different from the earlier movements for women rights. Contrary to its past expressions, it radically changed its focus from the public sphere to the private one, but its revolutionary zeal is not shared by the majority of its members. While the past expressions of feminism were only aimed at the elimination of anti-women laws and practices in our own culture and values. The new stance of the Movement shifted its focus from the public sphere to the private one, from the state and society to home and family. This radical shift has more political undertones and blindly believes in following the western radical trends which have emerged in the western world during the last three decades. The slogan “Mera Jism, Meri Marzi” contains the seeds of radical movements like LBGT (i.e lesbian, gay, bisexual, transgender ) with which the younger Americans are largely affected. It would be truly fatalistic if it seeps into Pakistani Feminism because it is fundamentally opposed to our culture and values. We need feminism because it is a social movement that removes the disparity of power that prevents such pestering issues like sexual harassment, child abuse, and forced conversions etc – from being remedied. Pakistani women do not want to use feminism to completely divorce Pakistani society from their traditional values. Its main aim is to create a just parity In the role of genders so that there should be no exploitation of one by the other.

Pakistan also inherited many social issues – such as polygamy, honour-killing, child marriage, inheritance, divorce and the right to education – from the pre-Partition times. Many of the demands for social and legal reforms on these issues were acceptable even within the bounds of true religion, unaffected by the bigoted Mullas. So, there was no fear of women demanding their equal rights with men in a society based on justice and fair-play.

The feminist movement in the 1980s was spearheaded by Women’s Action Forum (WAF) in the urban areas and Sindhiani Tehreek in rural Sindh. WAF struggled for a democratic, inclusive, plural and secular state while Sindhiani Tehreek strove for an end to feudalism and patriarchy.

However, present-day feminism is more pluralistic and accepting in terms of gender, sexuality, race, class and religion than its past editions. Several laws on women’s empowerment, sexual harassment at the workplace, honour killings and even domestic violence have been passed in recent times. Pakistani feminists still need to continue to protest over violence against women, raise awareness about women’s education, work for political, legal and health rights of women and struggle for more women-friendly laws.

Women’s freedom has quite unjustly been considered as being against the teachings of Islam. This is especially so when one is fighting against strict patriarchal norms in a tribal society. The mullahs, the self-proclaimed guardians of Islam, have created hurdles in giving women their just and equal rights alongside men. Thus peaceful agitation of Pakistani women for their just and equal treatment with men is the call of the day.