Orange-bellied parrots, all but extinct, survive Tasmanian summer only to die migrating 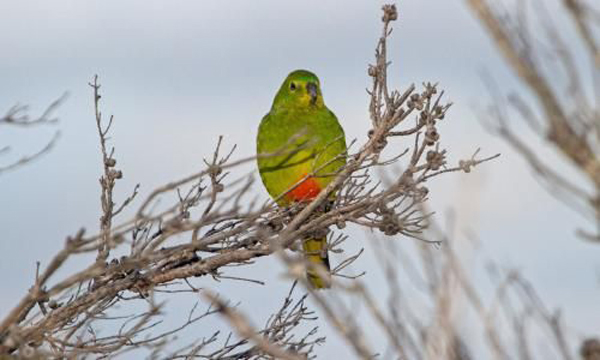 The story of the orange-bellied parrot, a small migratory bird that breeds in Tasmania’s south-west before heading north for the colder months, holds lessons for scientists working to prevent species from reaching the brink of extinction.

In sharp decline since the 1980s, if not earlier, the bird is listed as critically endangered, with scientists warning it could be gone in three to five years.

There was little idea what was driving the fall when, in the late 1990s, modelling was carried out to consider the best way to stem the decline. It suggested steps should be taken to buttress the parrot population during migration and through winter.

Protecting the budgie-sized species when it is on the move is incredibly difficult given the migrating birds fan out across the southern mainland and Tasmania’s north-west. A simpler though still highly challenging path has been taken – to look after them in summer, when they gather to breed at Melaleuca, deep in the Tasmanian world heritage wilderness area.

A study published on Monday finds this work at Melaleuca – led by Tasmanian government scientists, who have released captive-bred birds and provided nest boxes and food – has increased the number of birds that leave the breeding ground but had no impact on overall survival.

Between 1995 and 2017, the survival rate of young parrots crashed from 51% to 20%. Four out of five juveniles died during migration or over winter. While adults continued to survive at a similar rate as before – roughly three out of five – the population continued to decline as fewer young reached adulthood.

The study’s lead author, Dr Dejan Stojanovic from the Australian National University, says the results are alarming, and illustrate what can happen if threatened species recovery programs are narrowly focused rather than holistic. This particularly applies to migratory species, he says.

Stojanovic says the species is possibly Australia’s most endangered bird, and the world’s most endangered parrot. He says the study shows that unless all the threats a migrant species faces are addressed simultaneously, conservation successes at a local level can be quickly erased.

“Despite the laudable efforts of hundreds of people – and millions of dollars invested to protect the parrots in Tasmania and captivity – these actions ultimately produced more juvenile parrots that died during migration and winter,” he says.

Dr Shannon Troy, a Tasmanian government wildlife biologist and another author of the study, says it is as challenging today as it was 20 years to work out what is going wrong when the parrots migrate, let alone address them all. “It’s kind of like having a bucket with 11 holes and only 10 fingers. How do we stop this water leaking? You have to just keep moving your fingers,” she says.

But she agrees with Stojanovic that new, targeted conservation efforts are needed. Scientists have a laundry list of potential hazards facing migratory parrots, including predators, habitat loss due to development and bushfire, and the arduous two-way trip across Bass Strait for a bird that weighs only 45 grams and can no longer fly as part of a larger flock.

Troy says technology and the parrot’s size has limited scientists’ ability to track it during migration. A bird can only be expected to carry an instrument up to 5% of its body weight. For the orange-bellied parrot, that means a battery-powered tracking device has to weigh no more than about 2 grams.

A trial is under way in Victoria, run by the state environment department and Zoos Victoria, using tiny satellite-linked trackers on captive-bred orange-bellied parrots recently released into the wild.

While that work is ongoing, the parrot has had some positive news in Tasmania, in relative terms. In the spring of 2017 there were only three mature females and 14 males remaining in the wild. By the start of last breeding season the numbers were better balanced, with 13 females and 10 males.

By April, after the introduction of captive-bred adults and juveniles, the number of birds heading north for the winter had reached 118 – the first time the flock had surpassed 100 in more than a decade. It followed the expansion of a government captive breeding program. Troy says it will be a good result if 40 to 50 return to breed from next month.

Stojanovic says the work to develop a robust captive parrot population in Tasmania has given some insurance against the species going extinct, but the latest study –published in the Birdlife Australia peer-reviewed journal Emu – indicates it may not be enough unless further steps are taken. “Our results suggest that business as usual will not save this species.”

He favours “headstarting” – capturing juveniles after they leave the nest and holding them in captivity for their first year of life to allow them to develop before they attempt migration. “It will buy us some time to figure out what else we can do to protect the wild birds in situ,” he says.

More broadly, he hopes scientists and policymakers working to prevent the loss of more threatened species will learn from the parrot’s plight.

“There are a lot of birds today where orange-bellied parrots were 20 years ago,” he says.

“We hope this study is a lesson that protecting migratory species can’t just happen at one time or one place. Otherwise it will be quickly undone.”