Trump to travel US in epic troll of Democratic convention 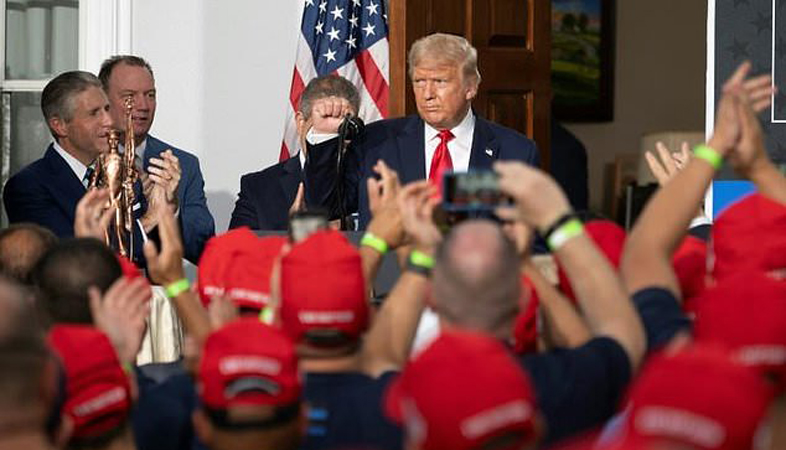 This week the eyes of US voters turn to Joe Biden, Kamala Harris and the Democratic convention — unless they swivel first to Republican distracter-in-chief Donald Trump.

For the Democrats, the convention is the real 2020 campaign launch, culminating on Thursday when Biden accepts the nomination to confront Trump on November 3.

The incumbent president, however, loves nothing more than stealing the show.

So when the Democratic celebration — already low key due to coronavirus precautions — kicks off Monday, Trump will begin his own campaign tour with speeches in the battleground states of Wisconsin and Minnesota.

On Tuesday, Trump will be back on Air Force One to speak in Arizona.

And on Thursday, the biggest moment in Biden’s political life, Trump is turning the troll factor to maximum with a speech next to Scranton, Pennsylvania — the blue collar town where Biden grew up and which he still refers to as his spiritual home.

According to the Trump campaign, the theme of this week’s tour will be, simply enough, “highlighting Joe Biden’s record of failure.”

Trump feels at his best in front of a live audience.

While he has also canceled his big Republican convention due to coronavirus restrictions, he still plans to give his main speech in front of guests in just under two weeks at the White House.

Trump’s last attempt to stage one of his beloved rallies, an event in Oklahoma in June, was a flop when few supporters showed up.

And this week he’ll be competing with the Democrats’ top stars, all of them nearly desperate to make him a one-term president.

What if Trump just ends up energizing his opponents?

“The biggest problem for President Trump right now is the more he speaks, the worse he does,” Julian Zelizer, a Princeton University politics professor, said on CNN.

“I am not sure having more of President Trump out there in the next few days will necessarily hurt Democrats. It might be exactly what they need.”

A veteran of reality TV and something of a genius at self-promotion, Trump entered politics with a knack for identifying opponents’ weak spots and turning them into central campaign themes.

In 2016, his catchphrase “crooked Hillary” stuck. In unprecedented, ugly scenes, he encouraged crowds to chant “lock her up.”

Traditionalists were appalled but Trump was tapping into widely held mistrust for the Clinton brand and his attacks, however crude, hurt the far more experienced opponent.

During the Democratic primaries, Trump likewise peddled deliberately insulting yet catchy nicknames for what many thought were the strongest candidates — “Crazy Bernie” Sanders and “Pocahontas” Elizabeth Warren.

Against Biden and Harris, however, Trump seems suddenly less sure of himself.

The duo are from the center of the Democratic Party, making them far more slippery targets.

And Harris in particular appears to trouble the president.

A former prosecutor, she does not fit easily into his central campaign message about Democrats being soft on crime. His testing of adjectives for her like “nasty” and “disrespectful” seem unlikely to endear him with women voters.

An ABC/Washington Post poll on Sunday found that 54 percent of Americans approve of Harris and just 29 percent do not.

Trump also seems to be losing some of his self-assurance over how to tackle Biden.

For months he has pushed the view that Obama’s former vice president, whom he nicknames “Sleepy Joe,” is senile and unfit for office.

Yet polls continue to show the Democrat with commanding leads in swing states and even threatening Republican heartlands.

Reflecting his frustration, Trump turned to a crowd of supporters from the New York Police Department on Friday for help, asking if perhaps he had a problem with the nickname.

Cheers for “Sleepy Joe” came louder and the president nodded. “That’s what I thought,” he said.