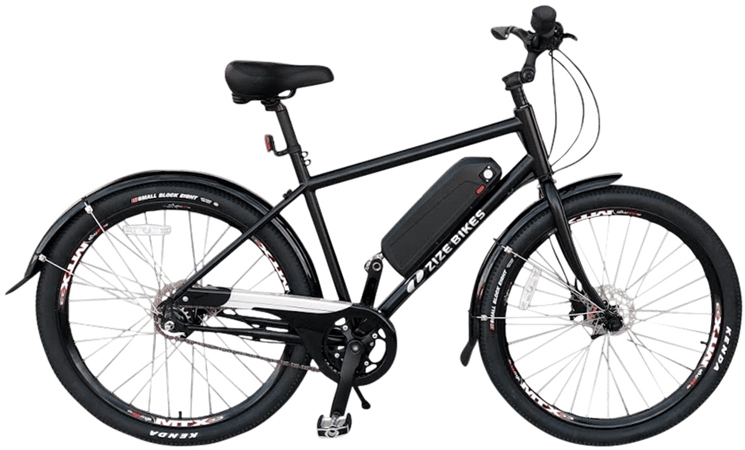 “Whooo, you’ve been in a good paddock.” That’s how my dairy-farming uncle likes to greet me when I’ve stacked on a few extra pounds. And there comes a point where the quality of one’s paddock begins to interfere with one’s ability to do good cardio exercise outdoors.

Running isn’t a good idea at heavier weights; it’s unkind to the joints. Cycling is a better low-impact option, but there too one runs into issues. Most bikes and ebikes have rated carrying capacities around 250 lb (115 kg). That’s enough to handle the vast bulk of cyclists, just not the vast bulk of a vaster, bulkier cyclist.

But you can spend a lot of time in the most magnificent of paddocks and still hop on this thing with confidence. Dubbed A New Leaf 3.0, this surprisingly normal-looking ebike from Zize, out of Kingsport, Tennessee, is built like a brick outhouse, and capable of handling beefy riders weighing up to a whopping 550 lb (250 kg). The New Leaf runs a powerful 750-W Bafang mid drive motor, overclocked with a bigger controller to put out a peak of 1,000 W that’ll drag your lardy carcass up a daunting hill with such ease that you’ll probably run it on a much lower power level. The gearshift is a quality internal hub shift system offering eight speeds, and it runs disc brakes front and rear, along with 32-spoke, double-walled alloy rims.

The battery is a 48-volt, 17.5-Ah unit holding 840 Wh. How far that’ll get you will depend largely on how hard you run the motor, as well as how much jiggly ballast you’re hauling in your sweat pants, but it’s on the bigger end of ebike batteries and a full charge will easily handle most commutes to the office and back, or a very solid workout session. Zize estimates a range around 40-50 miles (65-80 km).

The frame comes in small and large sizes, the smaller handling riders as short as 5.f ft (168 cm) and the larger accommodating giants up to 7 ft (213 cm). The frame and fork use aircraft-grade chromoly steel, the pedals are forged alloy, the seat post is double bolted, and the whole thing has been thought through with serious durability in mind.

Why on earth would you buy an electric bicycle if you’re that heavy and trying to get more active? Wouldn’t it be better to wobble around on a regular bike that doesn’t do half the work for you? No, sir.

Ebikes are such fun to ride that people tend to ride them further and more often than regular bikes. Hills that might deter you from even trying a certain route cease to be a roadblock, and if you’re willing to put up with some flak from your lycra-clad buddies, you can slot straight in with them on a group ride, choosing your assistance level to decide exactly how much exercise you want. They open up fitness opportunities you may never have even considered, and researchers have found them just as good as regular bikes in terms of fitness benefits for overweight riders. The Zize website is full of testimonials from riders who have used these things to truly turn over a new leaf and get down to a healthier weight. The main obstacle here is price. A New Leaf 3.0 will cost you a hefty US$6,650. But if that gets you moving on a new path that might lead to a patchier paddock, it could be the bargain of a lifetime.