In a time of misunderstanding among different communities, a rising pandemic, and adjustments in a new digital era, where can individuals find a beacon of light? On July 16th, Ambassador Akbar Ahmed, former Pakistani High Commissioner to the UK and Ireland and the Ibn Khaldun Chair of Islamic Studies at American University, was invited by Professor Patrick Thaddeus Jackson, Faculty Director of the AU Honors program for a discussion in an online series at the university. The inaugural zoom event covering “Islam in America,” had topics ranging from Ambassador Ahmed’s journey partaking as a leader in interfaith dialogue and researching Muslim identity, to the role and essential responsibility members of academia share in order to create spaces where differences and similarities are accepted. Professor Jackson is not only a key figure in interfaith dialogue within the university, but he is also a close colleague of Ahmed’s. I joined Ambassador Ahmed as his student and member of his research team.

The discussion kicked off as to how Ambassador Ahmed became interested in researching issues of Muslim Identity. With Ahmed being an anthropologist, identity is at the core of every research interest. Identity is critical because it connects to a subset of issues such as tribalism and ethnic politics. Notably, Ahmed considers questions like “what am I, who am I, and what is my role in society.” While there is an unimaginable possibility of answers to this question, the complexity breaches past philosophical perspectives. Ahmed’s teaching style has been highly rooted in the spirit of Socrates – the idea of constantly asking questions and attaining knowledge through curiosity. Being a student in Ahmed’s World of Islam class, the theme of “know thyself” was most certainly an essential foundational layer to build international bridges.

Our generation is suffering in a post 9/11 society where mean-spiritedness and negative rhetoric dictate the populace’s conception of Islam, as expressed in this discussion the “demonization of Islam”

Media has developed as one of the most powerful determinants, shaping popular beliefs around sociocultural issues in which audiences do not possess direct knowledge or experience. In choosing the right mode of expression for a particular project, Ambassador Ahmed stands behind honesty and integrity being the driving force behind his work. Publications, film, and art are simply “different rivers going into the same ocean.” He discusses Journey into America – a year-long project with a team of young researchers exploring 75 cities and towns across the United States. Ahmed stands proudly behind a diversified and passionate research team. He believes students with fresh eyes and backgrounds are always contributing a new perspective to his research. While it is critical that Ahmed’s message reaches the Muslim community, as a professor at American University, he strongly believes that in order to have some impact, he must consider communities regardless of race, gender, religion, every step of the way. 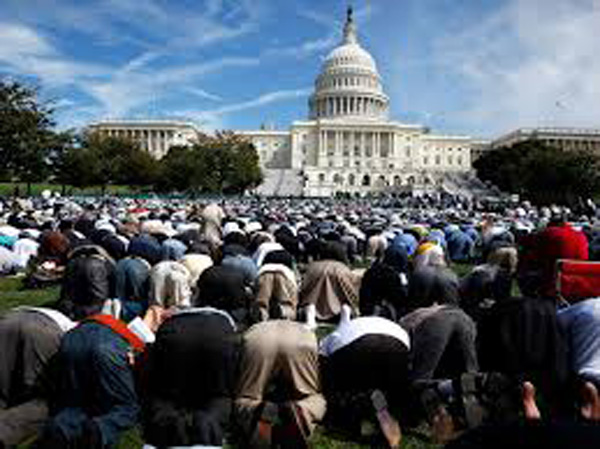 Across many of Ahmed’s journeys, various misconceptions have come across when reflecting on the Islamic religion. Islam is consistently portrayed in a distorted form as a “religion of terrorism.” The message of knowledge and understanding correlates back to the early teachings of Islam and specifically of Prophet Muhammad (PBUH), mercy of mankind. The Prophet (PBUH) preached for Muslims to “reclaim the narrative” and for everyone to “see each other in good faith.” Not only were these preached ideals, but these ideals were put into practice by everyone devout to the Prophet’s teachings. The central ideals of Islam consist of “Ilm” or knowledge, as it is the second most used word in the Quran. Knowledge fosters empathy, a dialogue and a true understanding among a group of people who are against various odds.

We are at a pivotal age. Our generation is suffering in a post 9/11 society where mean-spiritedness and negative rhetoric dictate the populace’s conception of Islam, as expressed in this discussion the “demonization of Islam”. But this negative aura is not exclusive to the post 9/11 world; it has existed throughout society and can be exemplified by events such as the visualizations of the beloved Prophet in Danish media. The so called “clash” ranging from the time prior to 9/11 to post 9/11 festered and grew into a phenomenon much larger, resulting in the idea of commonalities and mutual respect between the West and Muslim communities to be overlooked.

While Professor Jackson also expressed that this negative rhetoric seemingly got much more intense, Ambassador Ahmed encourages the audience to not overlook the periods where there was synthesis and harmony among Muslims and other communities. He admits that being a Muslim and an academic, more voices could have been raised directly after 9/11 when fear and anger was being used for violent retaliation. While Ahmed acknowledges changing perceptions around the “consistent hostility towards Islam” is one of many challenges today, a bigger awareness of this narrative in the United States along with Muslims themselves emerging in mainstream media raising their voices on pertinent topics is what keeps provides hope for future discourse.

The discussion was incredibly well received by an audience of students and scholars with great enthusiasm and genuine interest to become better allies. One of the takeaways is that our generation plays a critical role in enforcing intermingling and bridging the chasm between the West’s interpretation of the Muslim world. As Ahmed’s student, we are asked to analyze these questions and promote dialogue. In the wake of the Black Lives Matter Movement and a growing pandemic, shared goals to restore justice and empathy towards one another is more crucial than ever. However, it is also known that for rhetoric and attitudes to change, it does not happen overnight. As a research student from a Pakistani background, there needs to be more voices on such important topics. It is today’s generation, Muslim or non-Muslim who must continue to participate in roles of scholarship and leadership in order to shift away from limiting narratives enveloped around us. This is ultimately the paramount challenge of our time. Where does the beacon of hope lie? It lies within the people; us as compassionate human beings. Making every effort towards tolerance, harmony, and greater understanding in the most trying times.

The writer is studying International Studies at American University in Washington, DC. She is interested in peace, global security, and conflict resolution and justice, ethics, and human rights in South and Central Asia