My reason for wanting to do ‘Dum Mastum’ is Ehteshamuddin: Imran Ashraf 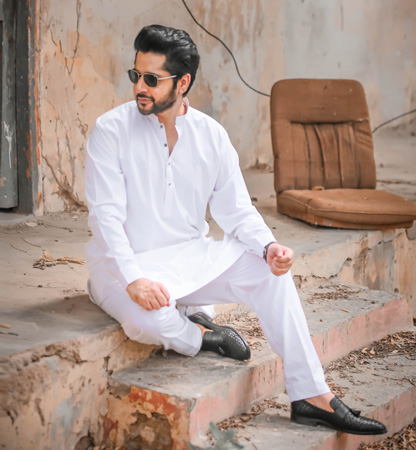 Pakistan’s beloved star Imran Ashraf has redefined performing arts in the industry with some of his iconic performances as a transgender in ‘Alif Allah Aur Insaan,’ Bhola “Innocent” in ‘Ranjha Ranjha Kardi,’ a rape perpetrator in ‘Inkaar’ and a challenged lover in ‘Kahin Deep Jalay.’

We will now see him take the high road in his debut feature film Dum Mastum directed by Mohammed Ehteshamuddin. Read further to learn more about the passionate performer in his exclusive interview.

Imran, you have astutely stated in the past how people labelled you as a minor supporting actor. Has that remark alone caused you any insecurity?

Not really – people in all fields give precedence to what others say about them. I don’t let others’ opinions or labels influence me in anyway. Who are they to judge when God is by your side? I was never a victim of complex. God never hindered my progress even in my most limited onscreen appearances. The crowd took notice of my presence regardless. I often confuse people with the kind of characters I play and leave the rest to their imagination.

What other scuffles were a part of your journey that have helped you cement yourself as one of Pakistan’s finest actors today?

Many people degraded me throughout my career but I was surrounded by a close circle of directors. Struggle for me was not just finding work but learning from my past. I am still learning and will continue to grow as I learn. I love my mother. Her wholehearted prayers and care have gotten me this far. I recall being nominated for Gul-e-Rana. I asked her if I would win the supporting role category. My mother saw a script lying on the table; it was for the drama play Alif Allah Aur Insaan. I was shooting for it back then. She looked at me and said that I would win for the role of Shammo, and in retrospect, that turned out to be true.

Why do you think it took you so many years to prove yourself in our industry?

Good looks and a certain physique were required to be an actor in Pakistan. A handsome man would qualify as the leading “hero.” However, our viewers have now become increasingly observant and intelligible about acting, as an art. Their love and endless support have empowered the industry to accept me for who I am.

From playing a transgender in Alif Allah Aur Insaan to an insecure but naïve husband in Kahin Deep Jalay, your canvas consists of broad, diverse roles. Are you finally at peace with where your career is heading acting wise?

No – I have greater expectations from myself as a performer. I may be at peace one day if I manage to pull off playing the same character in ten different ways. It shouldn’t be a norm for a romantic hero to deliver his dialogues so tediously. His manner of speaking can vary. One specific role can have considerable nuances.

Would you say you are a character actor seeing how well you transition from one personality to the other?

I am trying to be an actor; I will continue to explore my craft and not restrain myself to a specific acting category. I will happily agree to play a minor supporting actor if a constructive script demands such a character.

What kind of stories do you wish to express through your craft?

All of them. I thoroughly enjoyed living as Shammo and Bhola and would like to experiment more with such characters in the future. I aspire to play socially responsible roles that can influence people positively.

With your past and present roles, you have successfully shunned the stereotype that actors should resemble models. Artists today are more concerned about how they appear on screen than their actual job description. How does it feel to have paved a new path for aspiring actors to follow along?

That, to me is what success feels like. I am here to guide anyone who wishes to be a part of the entertainment fraternity. People ask for my advice as an elder and it feels great! A close friend of mine once said that he wanted to be a star but he negated the acting aspect completely. A while ago, he backtracked; he now hopes to be an actor, not a star. I feel that I have contributed my part in shaping our society’s perception about performing arts.

Unfortunately, a certain body type is required for actors today, specifically in Pakistan. Acting is a profession that goes well beyond the notion of standard beauty and has more to do with bringing someone’s story to life. Have you had similar experiences of not landing main characters because of your weight?

‘Many people degraded me throughout my career but I was surrounded by a close circle of directors. Struggle for me was not just finding work but learning from my past. I am still learning and will continue to grow as I learn’

Always – however, I would lose weight when the producers hired me for a good role, like I did in Inkaar; I was lean and toned. I became the character I was given. Had people believed in me earlier, thinking I could pull off certain roles, I would have reduced some body weight. They didn’t bother giving me a chance to prove myself as a performer. I agree that it is partially my fault too. I shouldn’t have let my weight go beyond what it was but despite everything, people made excuses and didn’t assign leading, heroic roles to me. I was told many times that I was not the quintessential hero. I am the same Imran Ashraf I was many years ago. So, what changed? There is a clear difference between good looks and someone’s physical presence. A chunky man may have better screen presence than a person who is thin. Whomever the camera accepts appears attractive on screen. One’s character has nothing to do with beauty. It is what an actor makes of the role. I am fortunate that people love me for who I am and who I am capable of becoming on-screen.

Does acting have any limitations, in your view?

Yes – overacting. It is a sin if someone acts for the sake of acting. Consider the character your own; live and breathe in that role, as someone else. That is art.

Are you ever satisfied with your performance during a scene for a television drama?

How do actors not know they have acted a scene brilliantly? I know for sure when I have performed well (laughs).

Why did you decide to embark on a film debut with Dum Mastum?

To be honest, I never thought that I would do a film, but I always knew that I wanted to work with our industry’s ace director Mohammad Ehteshamuddin, be it in the capacity of a telefilm, a drama or a movie. I am fortunate that a film prospect came my way. The only reason behind Dum Mastum and my reason for wanting to do this film is Ehteshamuddin. Luckily, Amar Khan wrote a wonderful script too.

You are also starring in the new drama play Mushk. What is the reason behind its postponement?

All the projects that were underway or on floors, including Mushk have been delayed because of COVID-19.

Are you enjoying the perks of being an actor?

I used to enjoy them but people have high expectations from me as a performer. I wish to prove myself to them. They may consider me a good actor but I am not. That thought worries me!

Let’s get to know you better. Are you more of a night owl or an early bird?

What would you be doing today had you not been an actor?

I never thought about it! I just knew life would take me somewhere.

A personal trait you wish to change.

To be less sensitive

Getting stuck in the elevator

An artist you hope to collaborate with in the future?

There are two; Saba Qamar and Sajal Ali

Who would play you in a biopic?

I will play myself only.

You have a humble fan following on Instagram. Because you are unable to respond to all your fans, what would you like to say to them through our platform?

I try my best to respond to every comment. If I am unable to do so, I am either working or doing other chores. I read each comment and appreciate them sincerely. I would just like to tell my fans that my hard work of ten years and their support is one!